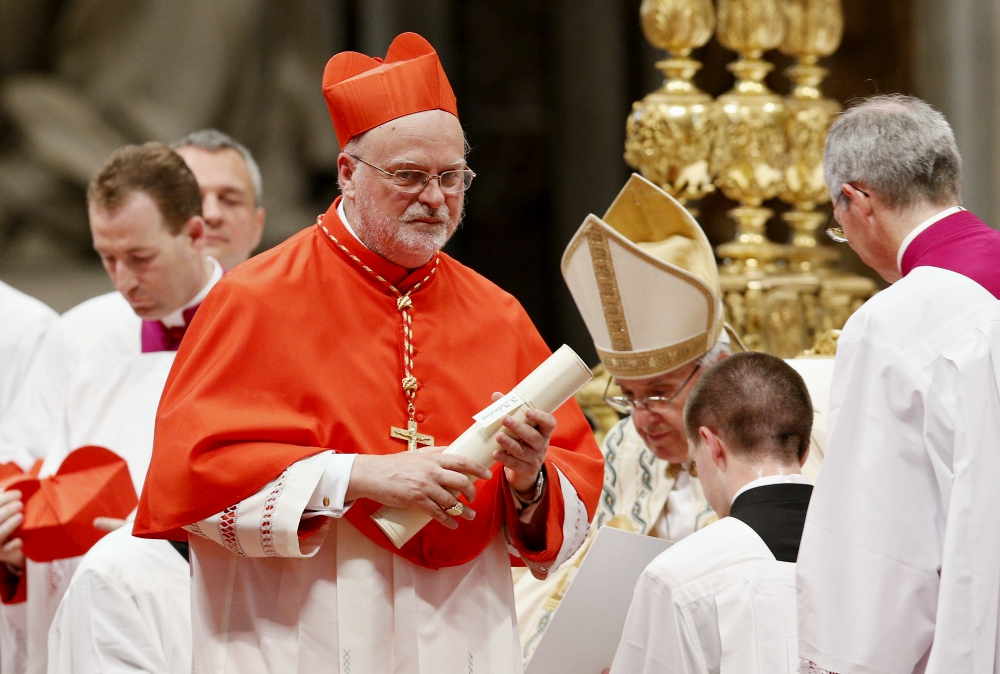 Cardinal Anders Arborelius of Stockholm carries his scroll after being made a cardinal by Pope Francis during a consistory in St. Peter's Basilica at the Vatican June 28. (CNS/Paul Haring)

Sweden's cardinal has praised Pope Francis' decision to give local bishops' conferences more authority over how the Catholic Church translates its liturgical texts, saying the Vatican does not always have the resources or the ability to understand the world's numerous languages.

Stockholm Cardinal Anders Arborelius, whom Francis made Sweden's first cardinal in June, said in an NCR interview Dec. 6 that the Vatican "has to rely" on local bishops, who best know the languages of their regions.

"For us, it is something very evident because there is no one [at] the Holy See who can understand Swedish," said Arborelius. "It's important that the bishops' conferences can have more say in this question because ... they know those languages that are used."

"Of course, there has to be a very deep connection to the Holy See in all these issues," he said. "But I think [Francis] is very good to promote the local churches and their bishops' conferences."

Arborelius was responding in the interview to a question about Francis' September apostolic letter Magnum Principium (issued motu proprio, or on his own initiative), in which the pope moved most responsibility for Catholic liturgical translations from the Vatican to local bishops' conferences.

During the half-hour interview at Rome's Basilica of St. Mary of the Angels and the Martyrs, the cardinal's new titular church, Arborelius also spoke about how he prioritizes listening to laypeople, how people in Sweden are receiving the pope's 2016 apostolic exhortation Amoris Laetitia, and why he thinks Francis may have chosen him as a cardinal.

In the area of liturgical translations, the new cardinal also addressed recent news that the Evangelical Lutheran national Church of Sweden is now encouraging its clergy to refrain from using gendered language in its liturgies.

The Church of Sweden is the largest Christian denomination in the country, with some 6.1 million members out of a population of about 10 million. There are about 150,000 Catholics in Sweden.

When asked about what the Catholic Church might learn from the Lutherans' decision, Arborelius said, "It's important to say we have to be true to the language of the Bible ... but also to explain to people that God's mystery is above the difference between man and woman."

He said the goal is "to find a balance between the mystery of God and the language of the Bible and the tradition."

"Jesus himself speaks about his father as Lord and God," he said. "We have to be true to what Jesus [said] and explain it, of course."

'Look upon every case with the eyes of Christ'

Speaking about Amoris Laetitia, which called on bishops and priests to shift away from evaluating peoples' familial status based on rigid canonical regulations, Arborelius said the document has not attracted wide attention in Sweden.

"I'm surprised that so few people have reacted," said the cardinal, who has led Sweden's only Catholic diocese since 1998. "Really, there have been no questions for further explanation of the situation."

Referencing the work of the Stockholm Diocese's canonical tribunals, which determine whether marriages can be annulled in the church, Arborelius said he understands the pope's message in Amoris Laetitia to be about evaluating each case on its merits and not always applying the same general norms. 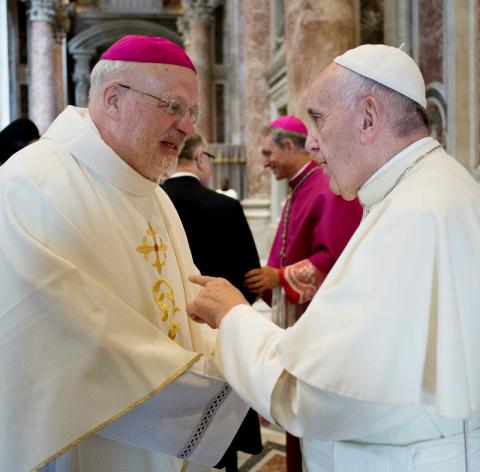 Pope Francis talks with then-Bishop Anders Arborelius before the pope leads the canonization Mass of Sts. Mary Elizabeth Hesselblad of Sweden and Stanislaus Papczynski of Poland at the Vatican June 5, 2016. (CNS/L'Osservatore Romano via Reuters)

"There are so many different issues and we have to look upon every case as a single, unique case," said the cardinal. "So it's very difficult to give general rules."

"I think if we understand the message of the pope, it means we have to look upon every single case with the eyes of Christ," he said, asking: " 'How would you, Lord, have solved this issue in this case?'

"Of course, we have a lot of help from tradition, from canon law," said Arborelius. "But it's a pastoral situation that is also very different and very unique."

He brought up the work of his canonical tribunals in the context of the demographics of the Catholic Church in Sweden, which includes many converts from other religions and also many Catholic refugees who have been part of the continuing migration from the Middle East into Europe.

In 2015, at the height of the migrant crisis, Swedish authorities said they took in more than 160,000 refugees fleeing from Syria, Afghanistan and Iraq.

Arborelius said his tribunals often encounter cases of converts who had been married before becoming Catholic and wish to have clarity about their first, non-Catholic unions, and also cases of refugees who had arranged marriages in their home countries.

"Half the cases in our tribunals come from people from the Middle East, because many marriages there were arranged between families," he said. "And when they come to Sweden, the position of the woman is totally different."

"We live in a very, very mixed situation where there are so many different kinds of cases and problems, that it's very difficult to give general rules," he said. "We just have to try to help people to sort things out."

'Just listening to people is important'

Arborelius also addressed the reaction to a suggestion he had made in a June NCR interview that Francis consider creating a special advisory body of women akin to the College of Cardinals to offer more opportunity for women's leadership in the church.

The cardinal said he had received some negative feedback to that idea. "Some women were against it," he said. "They said, 'We have to be on the same level.' "

"Some people say it's good, but some women say we have to be equal with the men, we have to have a mixed group of people, not only women," said Arborelius. "It's a question [to be] discussed."

Asked about an address Francis gave to new bishops from around the world in September, when the pope told the prelates to listen to laypeople and consult with them in how their dioceses should be run, Arborelius responded: "In our countries, it's quite natural because we live in a very democratic society and you rely a lot upon the help of laypeople."

"It's important to listen to ... people," said the cardinal. "And a lot of my time is to speak with all kinds of laypeople."

"Of course, I cannot satisfy all their wishes, but just listening to people is important, I think," he said. "Because so many people feel that there is no one who listens to me. You cannot make them all happy, but you can try to find out what is good."

Arborelius said he still does not know why Francis chose him as one of five prelates he made cardinal at the June 28 consistory. But he said he did receive a visit some weeks ago from an Argentine person who said the pope had told them to pass along a message.

"He sent a person from Argentina to speak to me about new evangelization," said the cardinal, suggesting Francis' choice of him "has something to do with the very secularized society of Sweden — that the church is still there, the church is growing, even in that atmosphere."

"I think that could be some reason because Sweden is regarded as one of the most secularized countries in the world," said Arborelius. "And still, the Catholic Church in the Nordic countries is one of the few parts of Europe where the church is growing."

The cardinal expressed satisfaction with the Basilica of St. Mary of the Angels and the Martyrs, a 16th-century church designed by Michelangelo and built into the grand ruins of the third-century Roman Baths of Diocletian, as his assigned titular church.

The last cardinal to be assigned the church as his titular parish was Baltimore Cardinal William Keeler, who died in March. The long line of cardinals who have held the position also includes 17th-century Milan Cardinal Federico Borromeo, cousin* of St. Charles Borromeo.

Arborelius noted that while the parish, located in Rome's Piazza della Repubblica, is the former official state church of Italy and is still used for state funerals, it also has active social ministries for those in need.

After meeting the parish staff and volunteers Dec. 5, "we were full of admiration," he said. "At first, we thought this is a very splendid, wonderful piece of art. And it is. But at the same time, they have this very good work in favor of the poor."

*The original version of this article misidentified the familial relationship between Federico and Charles Borromeo.