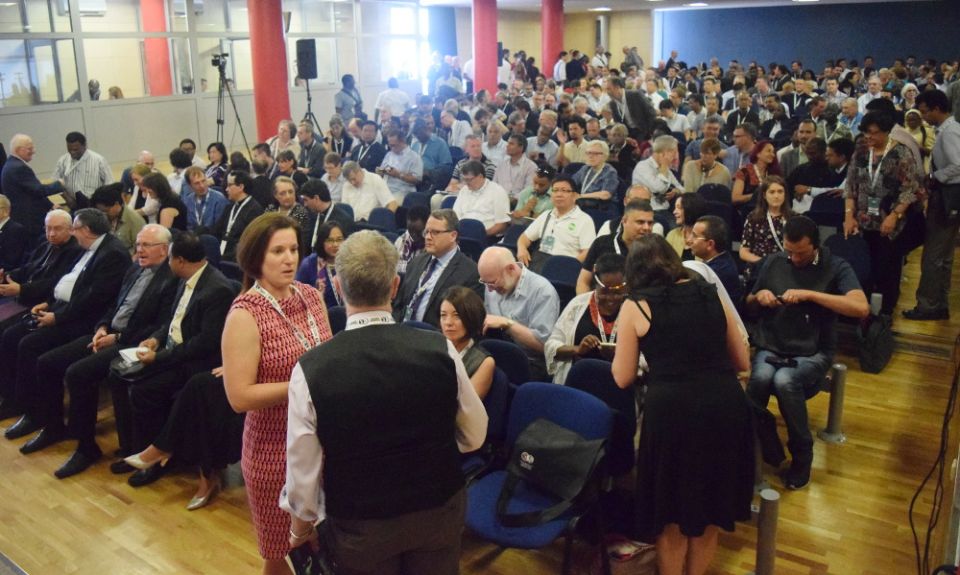 The crowd of 500 theologians gathered at the Catholic Theological Ethics in the World Church conference in Sarajevo (NCR photo/Joshua J. McElwee)

Sarajevo, Bosnia-Herzegovina — A first-of-its-kind meeting of nearly 500 moral theologians and ethicists got underway here July 26 with the surprise support of Pope Francis, who in a letter to the event praised its focus on discerning how academics can better respond to the shifting global geopolitical environment.

In a three-page note read aloud at the beginning of the "A Critical Time for Bridge-Building: Catholic Theological Ethics Today" conference, the pontiff said he had "appreciated this effort of yours" since meeting with the event's organizers at the Vatican earlier in the year.

The theme for the event, said Francis, is "one to which I myself have often called attention: the need to build bridges, not walls."

"I keep repeating this in the lively hope that people everywhere will pay attention to this need that is increasingly acknowledged, albeit at times resisted by fear and forms of regression," he said. "We are called to recognize every sign and mobilize all our energy in order to remove the walls of division and build bridges of fraternity everywhere in the world."

Mentioning that the July 26-29 conference is considering particularly how theologians can address contentious issues such as climate change and the treatment of migrants and refugees, the pope said that in today's "complex and demanding" geopolitical environment "there is need for individuals and institutions capable of assuming a renewed leadership."

"There is no need, on the other hand, for hurling slogans that often remain empty, or for antagonism between parties jockeying for the front position," said Francis. "We require a leadership that can help to find and put into practice a more just way for all of us to live in this world as sharers in a common destiny." 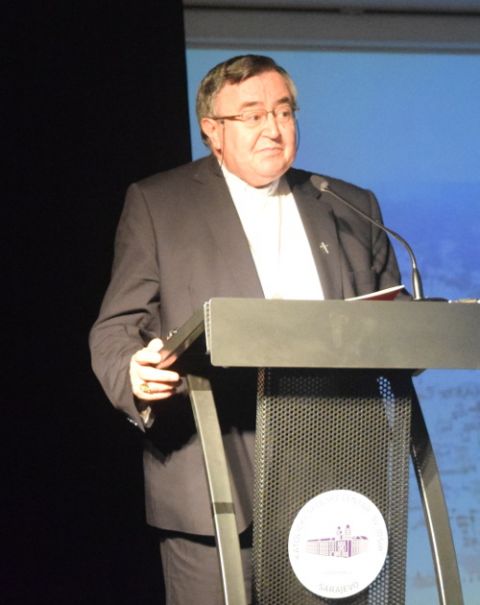 The Sarajevo conference is being hosted by Catholic Theological Ethics in the World Church, a network of academics that began in 2002 and now includes some 1,000 members. Participants from about 80 countries are taking part in the four-day event, which will unfold with plenary talks, panel discussions, and a slew of breakout sessions.

Francis' letter to the conference participants was read aloud during the event's opening ceremony in the evening of July 26 by Archbishop Luigi Pezzuto, the apostolic nuncio to Bosnia-Herzegovina.

After the opening, which included a reception featuring Sarajevo Mayor Abdulah Skaka, the conference is to get underway July 27 with presentations by a wide range of voices.

Among the dozens to speak the first day are: Fr. Antonio Autiero, from the University of Munster; Sr. Vimala Chenginimattam from the Dharmaram Vidya Kshetram in Bangalore; and, Emilce Cuda, from the Pontifical Catholic University of Argentina.

The Sarajevo event is the third international conference hosted by the theological ethics group, following events in Padua, Italy, in 2006 and Trent, Italy, in 2010, but the first focused primarily on how theologians can become more involved in wider society.

In his letter, Francis praised the network for the way it has connected academics from various continents.

Citing his December 2017 apostolic constitution Veritatis gaudium ("The Joy of Truth"), which updated norms for pontifical universities and faculties, the pontiff noted that in that document he had mentioned "the urgent need for networking between those institutions worldwide that cultivate and promote ecclesiastical studies."

"I encourage you, as men and women working in the field of theological ethics, to be passionate for such dialogue and networking," Francis told the conference.

"This approach can inspire analyses that will be all the more insightful and attentive to the complexity of human reality," he continued. "You yourselves will learn ever better how to be faithful to the word of God which challenges us in history, and to show solidarity with the world, which you are not called to judge but rather to offer new paths, accompany journeys, bind hurts and shore up weakness."

The Sarajevo conference opened July 26 with an address from Jesuit Fr. James Keenan, one of three co-chairs of the event. Keenan, who is also director of the Jesuit Institute at Boston College, said the academics had come together because they recognized that amidst the recent geopolitical changes they "need to be engaged." 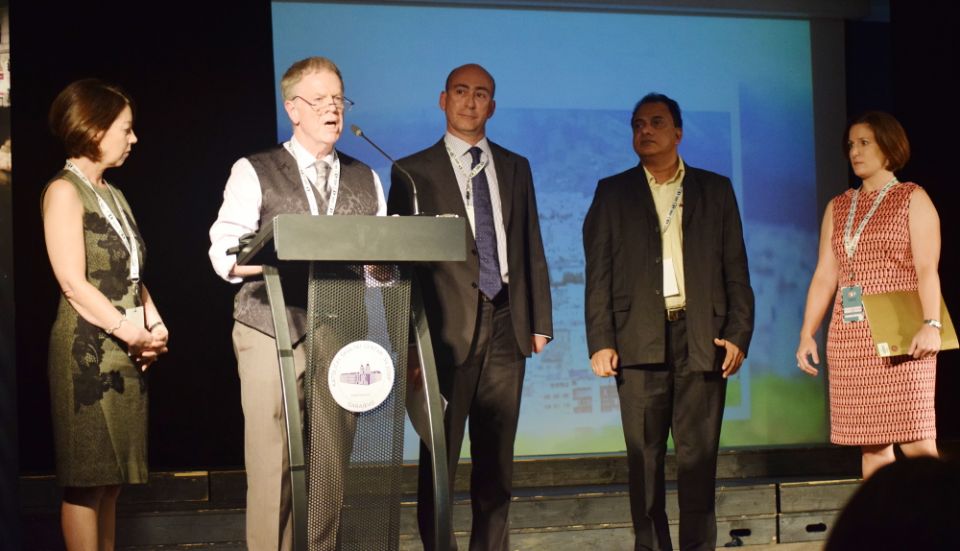 "In a world where nationalistic popularism tears apart any global cooperation, where the abandonment of the Paris accord mirrors the abandonment of migrants and refugees, where civility is sacrificed by the banality of self-interest and the common is trampled underfoot, we need to be globally connected and active, abandoning the domination of the global north and looking beyond local interests," Keenan said.

"We need to keep growing, deepening our network, making it more effective, and more responsive to a world and church in dire need," he added. "We have the capacity, the resources and the commitment to do that."

Keenan, who founded the theological network, also announced that he and Trinity College Dublin theologian Linda Hogan are stepping down as co-chairs of the global group as part of a new phase in its growth.

Kristin Heyer, from Boston College, will remain a co-chair of the network, and will be joined by Indian Carmelite Fr. Shaji George Kochuthara, from the Dharmaram Vidya Kshetram and Andrea Vicini, an Italian also on the faculty at Boston College. 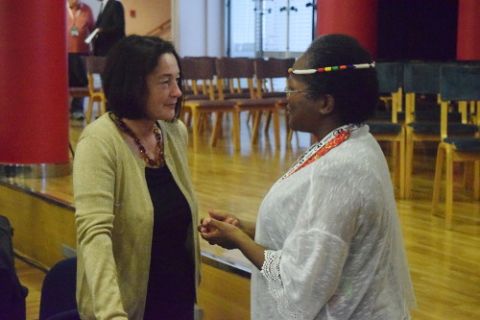 Theologians Julie Clague and Nontando Hadebe speaking on the sidelines of the conference in Sarajevo (NCR photo/Joshua J. McElwee)

"Here today we must start anew, afresh, mindful of the urgency but even more mindful of the many talents that are here," said Keenan. "Today from this time on, we must grow, include, innovate, and expand. In a word, go beyond ourselves."

Francis mentioned the change in leadership in his letter, saying he wished to join the conference attendees in thanking Keenan and Hogan for their work and would be keeping the new co-chairs in his prayers.

Also speaking at the opening were Sarajevo Cardinal Vinko Puljic and Elma Belsic, a member of Youth for Peace, an organization in the city that aims to help educate young people and encourage peace activism.

Belsic said her group wants to shape an ethical community that knows how to question right and wrong and understands that "choosing a right way demands hard work."

"I really hope that this great gathering will help us all fight together for the right values of love, peace, and living together," she said.

Your thoughts on impeachment, part two