Preaching on the election? Mercy is where we start; the common good is what we aim for. 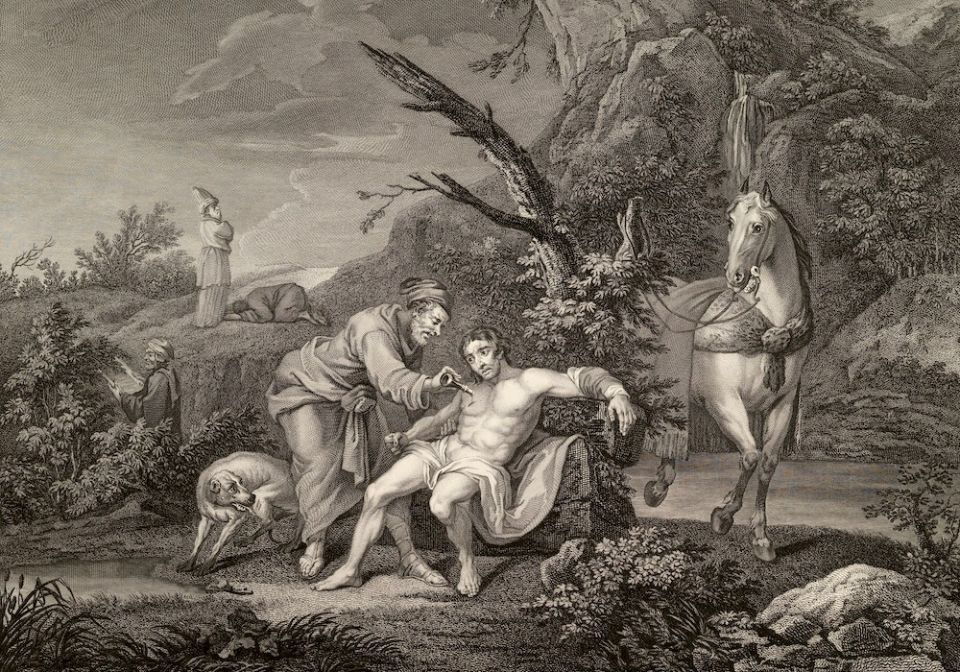 In his article on Catholic voting, Jesuit Fr. Thomas Reese claimed that most priests will not "provide much guidance." Reading that I thought, "OK, but maybe some will." For them and others who want to comment about Catholic voting this fall, I offer some resources from the Scriptures and the tradition on mercy, the common good and the capability for leadership.

Catholicism and the quality of mercy

No virtue gets higher endorsement in the Scriptures than mercy.

In both Luke and Matthew's Gospels, the entire issue of salvation hinges on it. In Luke 10:25-37, when Jesus is asked by the teacher of the law "what must I do to inherit eternal life?" he replies with the parable of the Good Samaritan which prompts the teacher's recognition that love of neighbor means showing mercy. In Matthew 25:31-46, the last judgment is all told in the key of what is later called the works of mercy.

The Gospels are clear and simple: If you believe and you want to be saved, be merciful.

In the tradition, no parable receives greater attention than the Good Samaritan. Clement of Alexandria, Origen, Ambrose and Augustine all taught that the parable was primarily the narrative of our own merciful salvation. Similarly from Venerable Bede (673-735) to Thomas Aquinas (1225-1274), preachers and theologians claimed that the story is first and foremost the Gospel in miniature, one of what Christ accomplished for us, so that we, in turn, could go and do likewise.

The moral instruction to show mercy is wrapped in the narrative of our being rescued.

This was consistently the prevalent, allegorical explication of the parable: the man who lies on the road is the exiled Adam (us), wounded (by sin), suffering outside the gates (of Eden). The priest and the Levite (the law and the prophets), pass him by because they are unable to respond. Along comes the Good Samaritan (Christ), a foreigner, one not from here, who tends to Adam's wounds (our salvation), takes him to the inn (the church), gives a down payment of two denarii (the two commandments of love), leaves him with the innkeeper (St. Paul/the pope), and promises to return for him (the second coming), when he will pay in full (our redemption) and take him with him into his home (the Kingdom).

The lesson is simple: Christians are called to be merciful because it was the merciful God who saved us. Mercy, as I define it, is the willingness to enter into the chaos of another. Just as Christ entered into ours, we enter into others and accompany them as well.

In history, mercy became quite quickly the trademark of Christianity. Since the first century, Christians acted on Matthew 25 in what were later developed as the works of mercy. Rodney Stark attributes The Rise of Christianity precisely to these works of mercy that changed the landscape of the port cities of the Mediterranean Sea that were densely populated with newly arriving strangers seeking work but surprised by the merciful generosity of the Christians.

During the Reformation, mercy became more identified with Catholicism, as Catholics insisted on the good works of mercy along with faith as the grounds of salvation.

Unfortunately, today our understanding of mercy is impoverished: It either looks like private, discretely pious actions or else it seems so shallow we ridicule its legacy with bumper stickers demanding justice instead of mercy.

Throughout history, however, the works of mercy were mostly collective, innovative and institutional. Those caring for the sick eventually created hospitals; those visiting prisoners formed societies to support them, their families and prison reform itself; clothing the naked led to the Vincent de Paul Society and an array of social services.

Getting to the common good

As I wrote in The Works of Mercy: The Heart of Catholicism, these corporate projects administered by guilds, religious orders or confraternities responded to all needs, never afraid of scandal. From among a hundred examples, there was in the 16th century the Confraternity of Divine Love that built enormous "hospitals for the incurables," that is, people with syphilis, in Genoa, Rome, Naples, Palermo, Florence, Bologna, Savona, Brescia, Padua and Venice. Six hundred years, later most of these structures still stand, such were their scope and foundations.

Similarly, mercy promotes and does not mitigate justice. The option of the poor, clearly embedded in the tradition of mercy, summons us to recognize and promote the rights of those on the margins because they have too long been overlooked. In mercy we accompany those whose rights are ignored, whether they are the unborn, the immigrant, the homeless, the prisoner or the millions upon millions of people whose own equity is socially compromised because of gender, race, tribe, caste, religion or sexual status. Mercy does not tire in its search for justice, and for that reason mercy always is inextricably linked to promoting the common good. 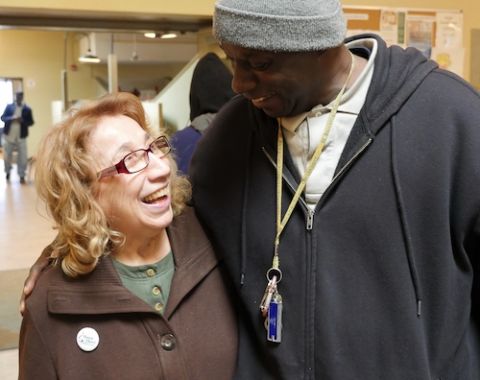 Sr. Grace Miller of Rochester, New York, left, walks with a person who is homeless at the House of Mercy. The 84-year-old sister started the homeless shelter more than 30 years ago as of May 2020. (CNS/Courtesy of the House of Mercy)

The common good provides direction for the political context of mercy.

On the common good, the Catechism of the Catholic Church (#1910) instructs us that "it is in the political community that its most complete realization is found. It is the role of the state to defend and promote the common good of civil society, its citizens, and intermediate bodies."

Much earlier Thomas Aquinas wrote similarly: "The law is chiefly ordained to the common good."

The common good means that our own welfare is constitutively connected to everyone else's. The world and all its goods are to be developed and sustained so that all can access them. The goods for nourishment, housing, health, work, safety and security, and education need to be adequately shared, protected and developed.

The common good then is our shorthand that inclusivity is a sine qua non for human flourishing. To promote the common good, then, is to promote the well being of all people, to provide access for what we humans need, as Thomas say, to live and act well. In a country whose citizens resist the responsibility to wear a face mask, our social inclination to the common good, seems to me, at rock bottom. Resurrecting the common good seems to me as urgent as any matter related to the upcoming election.

The one who promotes the common good is the one who helps create the possibilities for a society to incorporate each of its members as they work together supportively toward a decent life for all. This one has the capacity to enlist and inspire those who can dynamically envision the institutional structures necessary to support the society's efforts to grow in greater trust, solidarity and mutual responsibility, as well as in the ability to reconcile differences.

Capability for leadership is someone who understands the limits of reality, recognizes financial constraints, attends to details, respects boundaries, appreciates the importance of the law, knows how to motivate, is able to summon the best out of oneself and others, and can challenge all to think beyond self-interest. The Catholic voter turns then to one capacious to lead out of mercy for the common good.

This, then, is whom we are called to elect: those who give testimony to the quality of mercy in the lives they live; who demonstrate their evident commitment to put the common good before their own; and who, with some degree of capability and success, convince us that they can lead in a transparent, accountable, realistic and sustainable way even those too cynical to believe that this what we Catholics are called to do.

[Jesuit Fr. James F. Keenan teaches ethics at Boston College where he is the Canisius Professor.]

Commentary | Preaching on the election? Mercy is where we start; the common good is what we aim for.

God can guide us, even in the midst of tragedies