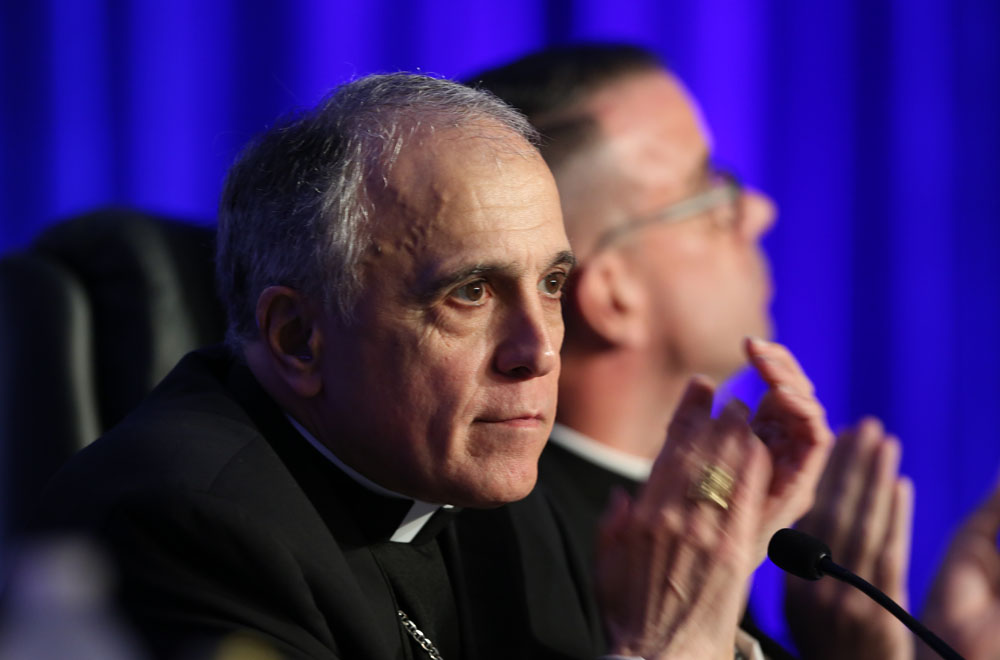 The U.S. bishops began their annual spring assembly by condemning recent immigration policies from the Trump administration that have separated families at the U.S.-Mexico border and threatened to deny asylum for people fleeing violence.

The morning session here began with a statement, but by its end escalated to numerous bishops endorsing the idea of sending a delegation to the border to inspect the detention facilities where children are being kept and even floating the possibility of "canonical penalties" for those involved in carrying out the policies.

"The latest developments are consistent with the sort of cardiosclerosis that has begun in our country, and it concerns across-the-board life issues," said Cardinal Joseph Tobin of Newark, New Jersey, who from the floor raised the idea of a bishop delegation to the border "as a sign of our pastoral concern and protest against this hardening of the American heart."

"And the invitation is to harden our hearts further," he said.

Issuing a statement in his capacity as president of the U.S. Conference of Catholic Bishops, Cardinal Daniel DiNardo set the stage by referring to "two very troubling recent developments in the area of immigration."

The policies in question were the decision announced June 11 by Attorney General Jeff Sessions that severely limits asylum seekers' ability to enter the U.S. by claiming they are fleeing domestic violence or gang-related violence. That followed the Justice Department's "zero tolerance" policy, introduced in early May, for immigrants crossing illegally in the U.S. that would separate children from their families.

"At its core, asylum is an instrument to preserve the right to life. The Attorney General's recent decision elicits deep concern because it potentially strips asylum from many women who lack adequate protection. These vulnerable women will now face return to the extreme dangers of domestic violence in their home country," the statement read.

Unless the policy is overturned, DiNardo said the decision "will erode the capacity of asylum to save lives."

On the separation of families, the cardinal said the nation's laws have the discretion to ensure families are kept intact and children not "exposed to irreparable harm and trauma."

"Families are the foundational element of our society and they must be able to stay together," DiNardo said.

"While protecting our borders is important, we can and must do better as a government, and as a society, to find other ways to ensure that safety. Separating babies from their mothers is not the answer and is immoral."

Earlier in the day, the bishops received updates on the conference's work on immigration and refugee issues from Archbishop Jose Gomez of Los Angeles, and Bishop Joe Vásquez of Austin, Texas. Gomez said the pace and development on the immigration issue has picked up in the last year, recapping the situation for Dreamers, the Trump administration travel ban and other steps it has taken regarding temporary protected status for refugees.

Gomez reported that following the Justice Department's "zero tolerance" policy, 640 families were separated in the period between May 3-17, with 55 to 65 children separated each day.

During the bishops' national "DACA call-in Day" in February, more than 50,000 calls were made to Congress in support of Dreamers, persons who were brought into the U.S. illegally as children.

Boston Cardinal Sean O'Malley, though not attending the conference, issued a statement saying that "the moral challenge of immigration is mounting for the United States."

"On too many occasions our government has taken a posture and established policy which is in principle and in practice hostile to children and families who are fleeing violence, gangs, and poverty," he said, adding "The United States is now openly before the world using children as pawns to enforce a hostile immigration policy. This strategy is morally unacceptable and denies the clear danger weighing upon those seeking our assistance."

In a comment session following the presentation, Brooklyn Bishop Nicholas DiMarzio urged his fellow bishops to contact members of House Freedom Caucus in their dioceses regarding the votes scheduled on two immigration bills next week. Neither is set to address the DREAM Act.

"They need to hear from us," he said, suggesting there's "an element of restrictionism" in the proposed legislation he believed was somewhat based in racism.

"But we cannot remain silent. This is really a crisis situation," DiMarzio said.

"In all my experience in immigration, it's never been quite this bad."

As the bishops discussed how to address the latest immigration policies, NBC News reported that the Trump administration was pushing for a federal court to rule DACA illegal, a move that could end the deportation protection program within weeks.

The idea of sending a delegation, or engaging in some type of public witness, appeared to gain traction among other bishops who spoke. In the afternoon session, DiNardo said the working group on immigration issues would head up exploring the possibility of such a delegation.

In the morning conversation, Bishop Oscar Cantu of Las Cruces, New Mexico, said that Pope Francis has demonstrated the powerful combination of a visible gesture combined with church teaching.

Bishop Joseph Tyson of Yakima, Washington, underscored the connection of immigration issues and life issues. He shared the story of an immigrant father without proper documentation in his diocese who faces deportation after he was arrested for speeding in trying to get his pregnant wife to the hospital to deliver their premature child.

"If you want to save the unborn, you have to walk through the doors of the undocumented. … It is wrong — wrong! — to separate out these serious immigration issues, these family issues from the life issues." Tyson said.

Tucson, Arizona, Bishop Edward Weisenburger, a canon lawyer, floated the possibility of "canonical penalties" for Catholics who are involved in carrying out the Trump administration's immigration policies.

"I think the time is there for a prophetic statement," he said, adding that canonical penalties are there first and foremost as a means to heal.

As part of the Share the Journey campaign, launched by Pope Francis and Caritas Internationalis in September, Archbishop Paul Coakley, board chair of Catholic Relief Services, invited U.S. bishops to join in organizing and conducting prayer pilgrimages as a way of walking and bearing public witness in solidarity with migrants and refugees. The campaign has a cumulative goal of amassing 24,900 miles walked — or the equivalent of traveling once around the globe — before Nov. 13, the feast of St. Frances Cabrini.

Other initiatives of the second year of the Share the Journey campaign asks Catholics to host "encounter meals" with migrants, as well as a new aspect to address fears of migrants and immigrants.