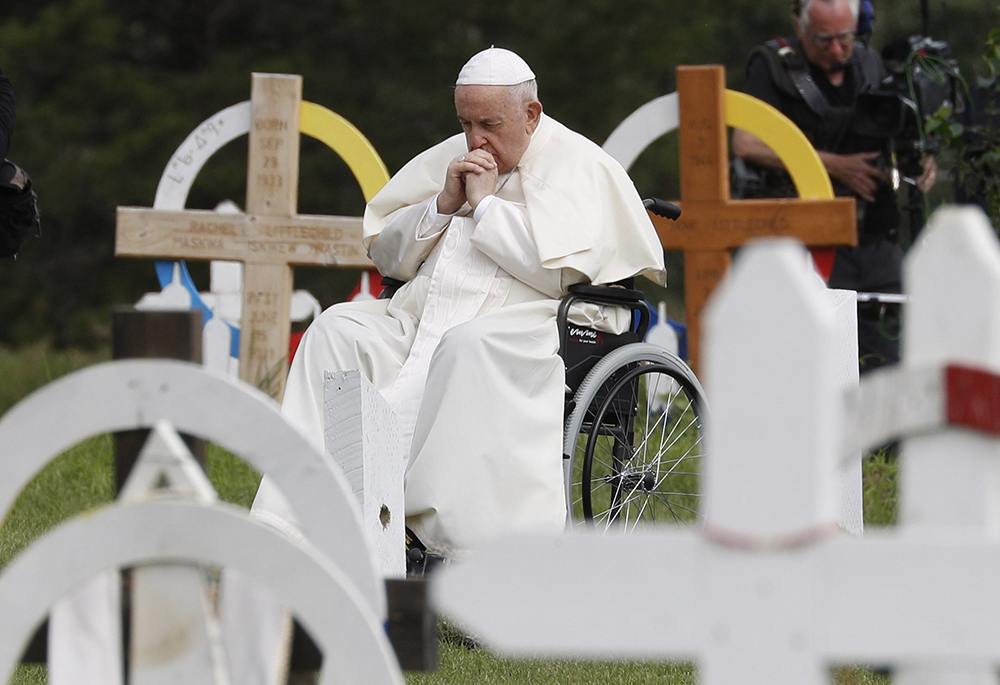 Pope Francis on July 25 said he was "deeply sorry" for the Catholic Church's "catastrophic" involvement in the "cultural destruction" of Canada's Indigenous peoples through its participation in running the country's residential schools.

"I humbly beg forgiveness for the evil committed by so many Christians against the Indigenous peoples," Francis said during a solemn meeting with Indigenous representatives, while visiting the former site of one of the largest residential schools in the country.

The pope's remarks — his first since arriving in the country on Sunday, July 24 — fulfill a demand from the Canadian Truth and Reconciliation Commission, which since 2015 has called on the pope to formally issue an apology on Canadian soil for the "spiritual, cultural, emotional, physical and sexual abuse of First Nations, Inuit and Métis children in Catholic-run residential schools."

"I am sorry," said Francis. "I ask forgiveness, in particular, for the ways in which many members of the church and of religious communities cooperated, not least through their indifference, in projects of cultural destruction and forced assimilation promoted by the governments of that time, which culminated in the system of residential schools." 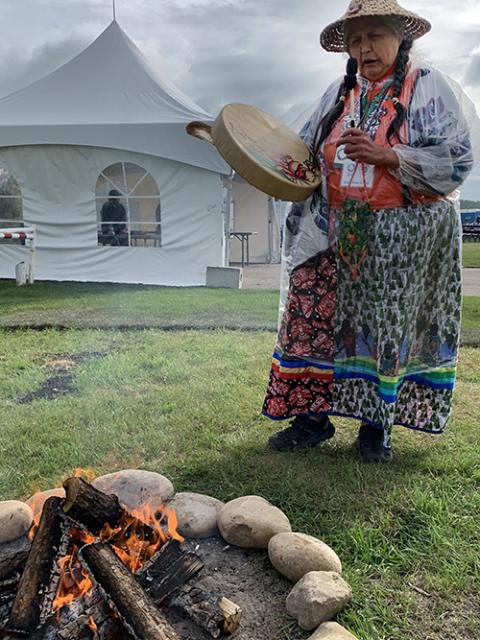 Ruby Rose Henry, a member of the Tla'amin Nation, warms up by a fire before Pope Francis arrives at the Muskwa, or Bear Park, Pow-Wow Grounds July 25 in Maskwacis, Alberta. (CNS/Cindy Wooden)

Organizers of the trip have sought to emphasize the significance of the fact that the pope's first words in the country did not come during a Mass or with government officials, but rather a direct apology and encounter with the country's Indigenous population.

Earlier this year, Francis held a weeklong series of meetings at the Vatican with Indigenous representatives and at the conclusion of their meetings, on April 1, issued his first apology for the "deplorable" treatment of Indigenous peoples at the residential schools by certain Catholic officials and pledged to visit Canada later in the year.

But upon touching down in Canada on the grounds of the former Ermineskin Residential School, the pope strengthened his apology, begging pardon not just for the actions of individual Catholics but for the church's culpability in adopting policies that stripped away Indigenous languages and identities.

"Although Christian charity was not absent, and there were many outstanding instances of devotion and care for children, the overall effects of the policies linked to the residential schools were catastrophic," said Francis.

From the 19th century until the 1970s, Catholic organizations operated up to 60% of Canada's residential schools, which were designed to forcibly assimilate Indigenous peoples into the country.

"What our Christian faith tells us is that this was a disastrous error, incompatible with the Gospel of Jesus Christ. It is painful to think of how the firm soil of values, language and culture that made up the authentic identity of your peoples was eroded, and that you have continued to pay the price of this," Francis said. "In the face of this deplorable evil, the Church kneels before God and implores his forgiveness for the sins of her children." 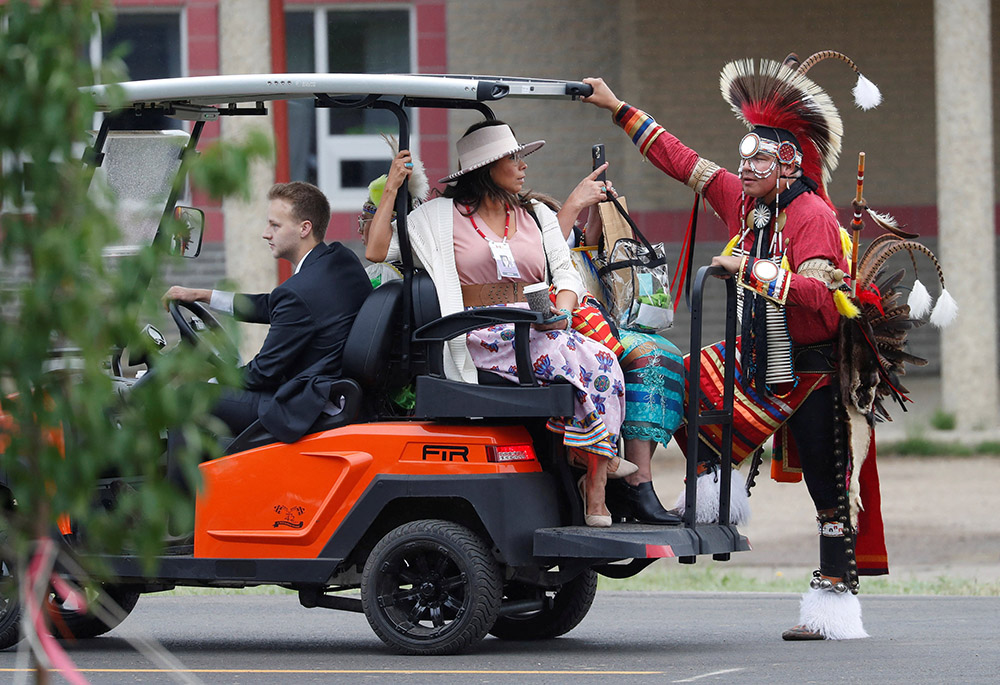 At the beginning of his remarks, the pope recalled that one of the Indigenous delegates left with him two pairs of small moccasins when they visited the Vatican, meant to signify the suffering of the Indigenous school children and those who never returned home.

The moccasins, he said, "kept alive my sense of sorrow, indignation and shame." Following his remarks, Francis returned the moccasins to their original owners.

Marie-Anne Day Walker-Pelletier, a former chief of the Okanese First Nation in Saskatchewan, who had given the moccasins to Francis, had previously told NCR that she would be anticipating the moccasins coming home.

"It's not about the moccasins," she said. "It's about the graves of the children who were never found, the kids who were abused, raped and died at residential schools, the babies who were incinerated."

As he offered the first remarks of his July 24-30 visit to the country, the pope acknowledged those shameful realities, saying that when European settlers first arrived in Canada, there was an opportunity for a "fruitful encounter" between the mixed cultures and spiritualties, but expressed regret that by-in-large, that did not happen.

"I think back on the stories you told: how the policies of assimilation ended up systematically marginalizing the Indigenous peoples," he elaborated. "How also through the system of residential schools your languages and cultures were denigrated and suppressed; how children suffered physical, verbal, psychological and spiritual abuse; how they were taken away from their homes at a young age, and how that indelibly affected relationships between parents and children, grandparents and grandchildren." 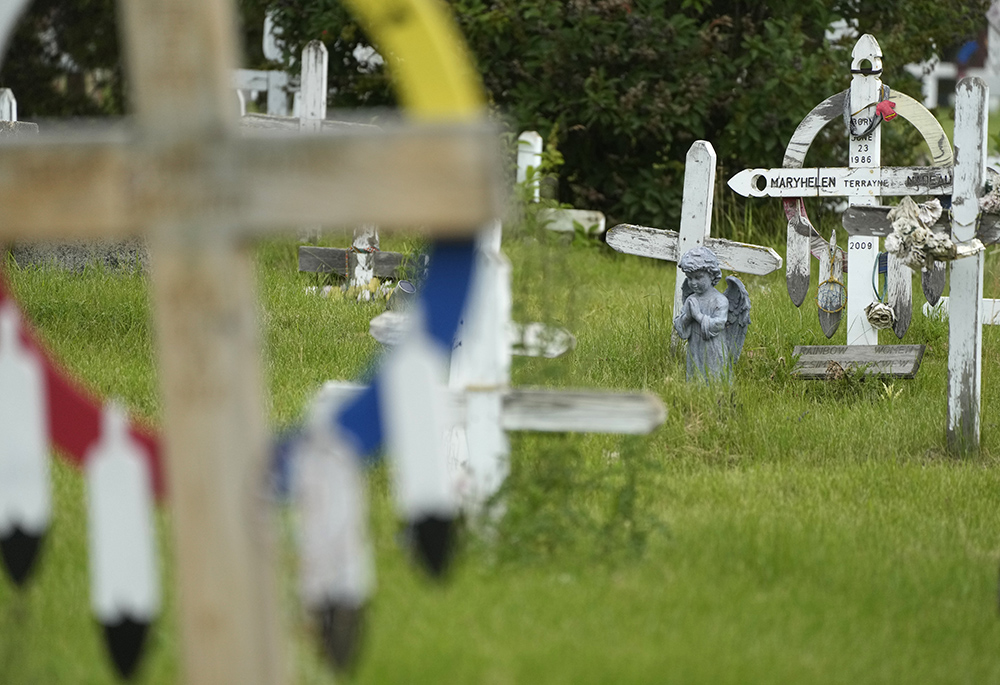 A view of the cemetery where Pope Francis was to pray, Monday, July 25, in Maskwacis, near Edmonton, Canada. (AP photo/Gregorio Borgia)

Amid wind and occasional rain, an estimated 2,000 survivors of residential schools attended the Monday morning meeting with Francis, alongside a crowd of some 4,000 Canadians, including Prime Minister Justin Trudeau, Governor General Mary Simon, and a number of elected officials.

The 85-year-old pope, who has struggled with mobility issues in recent months due to a knee injury, arrived in a wheelchair and remained seated during his remarks. Prior to his arrival at the Bear Park Pow-Wow Grounds in Maskwacis, Francis visited the nearby Ermineskin Cree Nation Cemetery, a site that contains both marked and unmarked graves with the likely remains of former residential school students. There, the pope prayed in silence before his arrival on the grounds of the former school.

During his subsequent remarks to the elders and survivors, he acknowledged that he had received invitations to visit a number of Indigenous lands throughout the country and expressed regret that his weeklong visit is limited to only three regions of the country. As the pope issued his long sought-after apology, which was translated from Spanish to English, he was repeatedly met with applause and whistles by those in attendance in Maskwacis.

"Know that I am aware of the sufferings and traumas, the difficulties and challenges, experienced by the Indigenous peoples in every region of this country," said Francis. "The words that I speak throughout this penitential journey are meant for every Native community and person." The pope was flanked by local tribal leaders of the Ermineskin Cree Nation, Samson Cree Nation, Louis Bull Tribe and the Montana First Nation, who sat next to him on stage.

As he concluded his remarks, the pope also called for continued assistance and an ongoing investigation into the past historical wrongs against Indigenous peoples, a likely nod to demands from survivors who have said that a key test of the church's sincerity in its apology will be whether it will release its residential school records and offer financial support to victims.

Before saying goodbye, Francis donned a traditional Indigenous headdress, recited the Our Father in English and embraced several survivors, some of whom wiped tears from their eyes and others whom seemed to express continued anger at the church's failings.

Cassidy Caron, president of the Métis National Council, told NCR ahead of the visit that while each survivor will have their own measure of the success of Francis' papal visit, a "good start to walking the path of truth, reconciliation, justice and healing" would include eliminating impediments to accessing the church's historical records, which she said would be a "concrete action" to follow the pope's words.

David Chartrand, president of the Manitoba Métis Federation who led a delegation of over 100 elders and survivors of residential schools, many of whom remain devout Catholics, said that beyond the pope's apology, there are areas of pastoral care that should be an ongoing sign of the church's commitment to the Indigenous.

Speaking to NCR during the papal trip, Chartrand cited church closures and an ongoing rotation and shortage of priests in his region, which he told NCR is a "worrisome" trend. Despite those fears and past anger, he said the major takeaway from both the morning and the pope's time in Canada is hope.

Francis will continue his encounter with the country's Indigenous peoples in the province of Alberta through Wednesday, July 27 and then head to French-speaking Quebec City for meetings with government officials and other Indigenous leaders.

"You are like the Apostles," Chartrand said he told the elders from Manitoba. "You must now go back and tell this story."