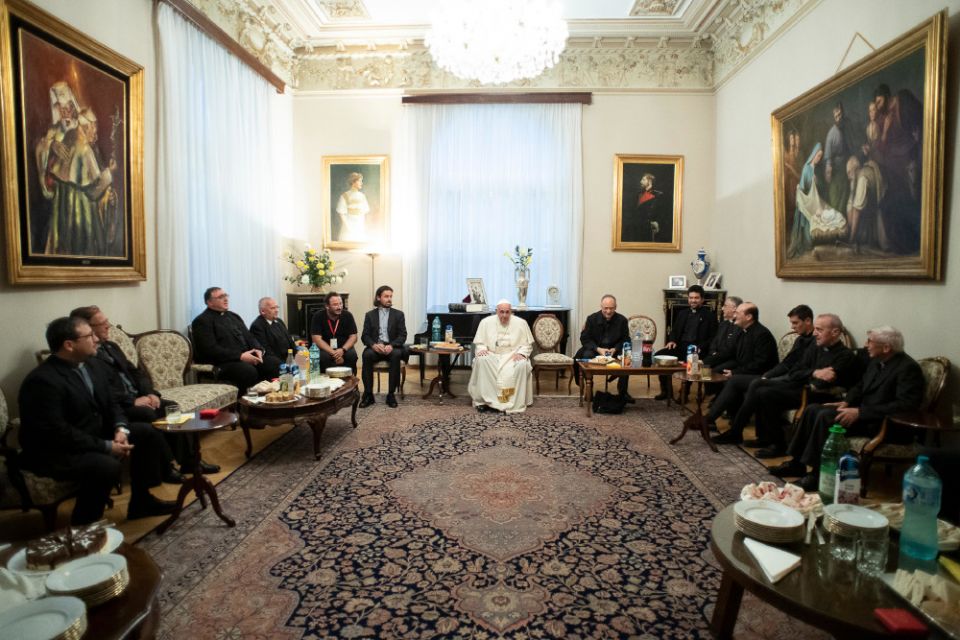 Pope Francis meets with a group of Jesuits at the apostolic nunciature in Bucharest, Romania, May 31, 2019. In remarks to the group, the pope said the church was being "wounded by tensions within it." (CNS/Vatican Media)

Vatican City — Pope Francis told Jesuits in Romania that tensions and struggles within the church have left it wounded and that the only path forward is through humble dialogue, not futile arguments.

"I think of the church as a field hospital. The church is so wounded, and today it is also so wounded by tensions within it," the pope told the Jesuits during a meeting May 31 in Bucharest.

"Meekness, it takes meekness! And it takes a lot of courage to be meek! But you have to go forward with meekness," the pope said. "This is not the time to convince, to have discussions. If someone has a sincere doubt, yes, one can dialogue, clarify. But don't respond to the attacks."

As has become customary when the pope meets Jesuits during a foreign trip, a transcript of his remarks was released weeks later by the Jesuit journal La Civilta Cattolica.

According to the text published June 13, Francis told the 22 Jesuits that in moments of "tribulation and fury," Christians must imitate Jesus who "didn’t argue with the Pharisees and the Sadducees as he had done before when they tried to set traps." Instead, "Jesus remained silent."

"There's no talking at the moment of fierce fury. When persecution is taking place, what remains to be lived is witness and loving closeness, in prayer, in charity and in goodness," he said. "You embrace the cross."

Francis met with the Jesuits at the apostolic nunciature in Bucharest at the end of his first day in the country. According to La Civilta Cattolica, the pope spent nearly an hour with the group answering their questions "in a relaxed and family atmosphere."

Asked about where he finds consolation in moments of trial, the pope said he seeks it in prayer and especially in meeting with "God's people."

"God's people understand things better than we do. God's people have an understanding, the 'sensus fidei,' (sense of faith) that corrects your line and puts you on the right path," the pope said. "You should hear what people say to me when I meet them! They have a nose for understanding situations."

Another Jesuit asked the pope his thoughts regarding marriage annulments and the difficulties faced by many couples who "are unable to make it to the end of the process" because "the tribunals don't work."

The pope recalled the criticism he received -- and continues to receive -- on the issue of Communion for divorced and civilly remarried couples.

While he said some people accused him of calling the Synod of Bishops on the family specifically to find a way "to give communion to the divorced," the gathering really was a step forward "on the path in matrimonial morals, passing from the casuistry of decadent scholasticism to the true morals of St. Thomas Aquinas."

"That point at which 'Amoris Laetitia' speaks of the integration of divorcees, eventually opening up to the possibility of the sacraments, was developed according to the most classical morals of St. Thomas, the most orthodox; not the decadent casuistry of 'one can or one cannot,'" he said.

Nevertheless, Francis said that while it may seem easier to tell couples, "'You can or you can't'" or "'Go on, no problem,'" they instead must be accompanied.

Pope 'most fearless man I ever met,' says filmmaker Wenders