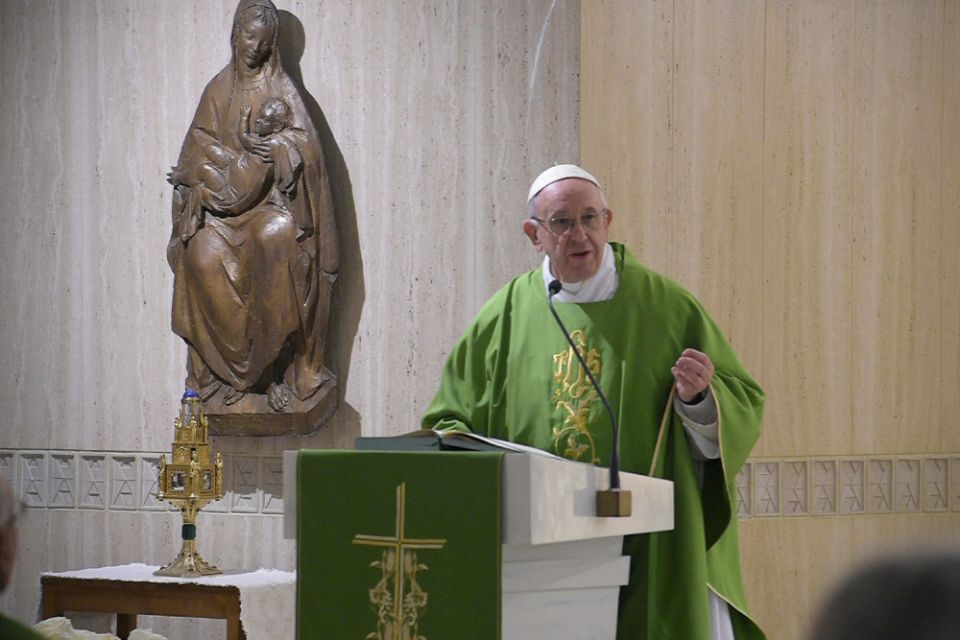 Pope Francis gives the homily during morning Mass in the Domus Sanctae Marthae at the Vatican May 25. (CNS/Vatican Media)

Vatican City — A life of holiness isn't defined by having visions or performing extraordinary feats of devotion, but by living with the hope of salvation promised by Christ, Pope Francis said.

While the call to live like a Christian is "the same as saying to live 'like a saint,' " it does not mean "having a face like on a prayer card," the pope said in his homily May 29 during morning Mass at Domus Sanctae Marthae.

"Being a saint is another thing. It means walking toward what the Lord tells us about holiness. And what does walking toward holiness mean? Peter says it: 'Set your hopes completely on the grace to be brought to you at the revelation of Jesus Christ,' " Pope Francis said while reflecting on the day's first reading.

The central message of the reading, in which Peter calls on Christians to be holy "in every aspect of your conduct," is to walk toward the light of holiness by avoiding "the world's way of thinking," which "takes away your freedom," he said.

Christians may experience "the temptation of looking back" during difficult moments in life, like the people of Israel did when wandering in the desert, he said.

"When they looked forward, things would go well," the pope said. "When they looked back with nostalgia because they could no longer eat the good things that had been given to them, they would make mistakes and forget that back there they did not have freedom."

Pope Francis said that by avoiding the slavery of a worldly mentality, Christians can experience the freedom of trusting in God's promised of salvation.