by Joshua J. McElwee, Soli Salgado
Vatican
This article appears in the Francis in Chile and Peru feature series. View the full series. 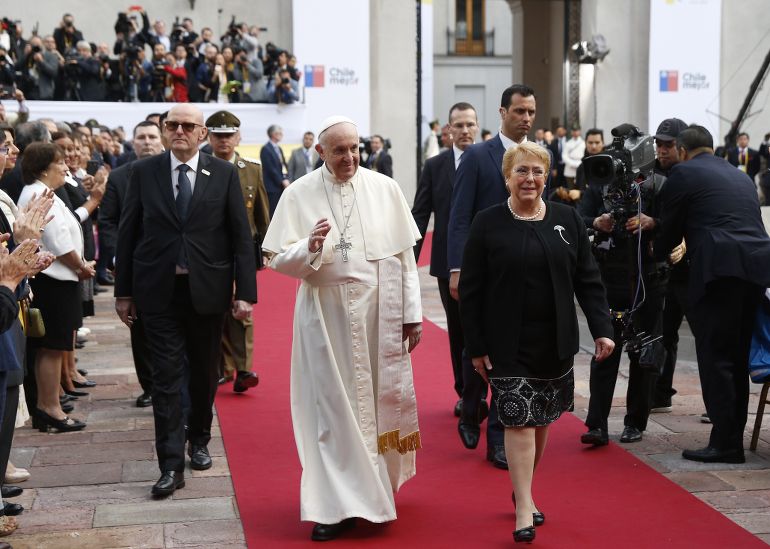 Santiago, Chile — Pope Francis has expressed "pain and shame" over the sexual abuse of children by Catholic priests in Chile, telling the country's political leaders Jan. 16 that it is right for the church to ask forgiveness.

In his first speech during a three-day visit to this traditionally Catholic country, now reeling from recent revelations of abuse, the pontiff also said the church would commit itself "to ensuring that such things do not happen again."

"I feel bound to express my pain and shame at the irreparable damage caused to children by some ministers of the church," Francis told Chilean President Michelle Bachelet in a speech outside the imposing facade of the country's La Moneda palace. "It is right to ask for forgiveness and to make every effort to support the victims."

Francis' expression of pain comes as the pontiff himself continues to face criticism in Chile over his 2015 appointment of Bishop Juan Barros Madrid of Osorno, Chile, who is accused of covering-up for notorious abuser Fr. Fernando Karadima in the 1980s and ‘90s.

Local Catholics have planned daily protests against the pontiff over the Barros appointment, and anger at the pope and the church has led to an atmosphere in Santiago not before experienced during one of Francis' other 21 visits abroad.

Those opposed to Francis' visit have also been very active on social media, using the Twitter hashtag #noalpapaenchile and sharing the slogan: "No more abuse, no more cover-up, no more hypocrisy."

One abuse survivor said Francis' words about clergy abuse Jan. 16 were not enough.

"The pope has all the necessary power and responsibility to end clerical abuse today, if he wanted," said José Andrés Murillo, who was abused by Karadima and is now the executive director of the Chilean foundation Para la Confianza, which helps survivors of sexual abuse.

"[The pope] is responsible for removing, if necessary, every bishop ... who has covered-up a case of abuse," said Murillo. "If he does not do that, his pain and shame is not credible."

Other Chileans said they hoped Francis' expression of pain was only the beginning of his efforts in dealing with clergy abuse in the country. One man at O'Higgins Park, where the pope celebrated an outdoor Mass later Jan. 16, called the pontiff's words a positive step forward but said it was only one step.

One woman at the park who traveled about 70 miles from the coast town of Valparaiso to see Francis said she hoped Chileans would understand that just because the pope has spoken about the issue that not everything is healed.

The pope did not mention Barros or Karadima by name in his speech at the presidential palace, which primarily focused on encouraging the political leaders to work for the common good instead of partisan or commercial interests.

Barros had been serving as the head of Chile's military diocese until Francis moved him to Osorno in 2015. The Vatican sentenced Karadima to a life of prayer and penance in 2011, although the priest has denied the numerous allegations against him.

Though Barros was not implicated in Karadima's canonical trial, victims say the prelate destroyed incriminating correspondence from the priest. Other victims claim the future bishop was even a witness to some of the sexual abuse.

New revelations about Francis' awareness of claims that Barros protected Karadima came Jan. 12, with leak of a previously unknown letter the pontiff had written to the Chilean bishops' conference in 2015, acknowledging that Barros was controversial before making the appointment to Osorno.

Francis has publicly defended his appointment of Barros in the past. Captured on video speaking to a Chilean in the crowd at a May 2015 general audience at the Vatican, the pope said people were judging Barros "without any evidence" and even said the allegations against the bishop were being orchestrated by "lefties."

Crowds along Francis' route through Santiago towards the presidential palace Jan. 16 were thin, with police lining streets that for long stretches were nearly empty. Unlike previous visits in other countries, the convoy surrounding the pope's car was heavy, with at least seven unmarked police vehicles traveling with the pontiff.

In the rest of his speech at the palace, Francis referred to Chile's recent economic boom -- it is now considered by several indices as the most competitive economy across Latin America -- and said the people of the country have a "great and exciting challenge" to make their nation "a true place of encounter for all."

The pontiff also referenced the "growth of democracy" in Chile following the 1973-90 dictatorship of General Augusto Pinochet.

Speaking in front of the palace where then-President Salvador Allende killed himself at the beginning of the military coup, the pope said the country "has faced moments of turmoil, at times painful, yet succeeded in surmounting them."

Quoting from 20th century Chilean St. Alberto Hurado, who founded organizations to care for children in need and strongly supported the country's labor movement, the pontiff said a nation is not just the sum of its land or its traditions but "a mission to be fulfilled."

"It is a future," said the pope. "And that future depends in large part on the ability of its people and leaders to listen."

"The ability to listen proves most important in this nation, whose ethnic, cultural and historical diversity must be preserved from all partisan spirit or attempts at domination, and inspire instead our innate ability to replace narrow ideologies with a healthy concern for the common good," he said.

Bachelet, a member of the country's Socialist Party, is a lame-duck president set to be replaced in March by the more right-wing Sebastián Piñera. She is the daughter of Air Force General Alberto Bachelet, who was tortured to death at the beginning of the military coup.

'Weave a fabric that will not unravel'

Hundreds of thousands of people packed into the 190-acre O'Higgins Park for the outdoor Mass later Jan. 16, waving flags and yellow hats as the pope arrived in the pope-mobile.

Francis reflected in his homily on the meaning of Jesus' Beatitudes in the lives of everyday Chileans.

Looking out over the crowds, the pope said that the promised blessings were not things predicted by "a mere onlooker gathering grim statistics about current events" but were "born of the compassionate heart of Jesus, which encounters the hearts of men and women seeking and yearning for a life of happiness."

"How much the heart of the Chilean people knows about rebuilding and starting anew!" said Francis. "How much you know about getting up again after so many falls! This is the heart to which Jesus speaks; that is the heart for which the Beatitudes are meant!"

The pope called on Chileans to "forge a future of peace, to weave a fabric that will not unravel."

After celebrating the Mass Jan. 16, Francis will meet in the afternoon with a group of priests and religious, and then speak to the country's bishops at Santiago's cathedral. On Jan. 17, Francis will visit Temuco, about 415 miles south of Santiago. On Jan. 18 he will visit Iquique, about 1,000 miles north, before continuing on that day to Peru.

There are unconfirmed reports that Francis plans to meet with clergy abuse victims while in Chile. Vatican spokesman Greg Burke did not confirm those reports in a briefing with journalists Jan. 11, but said that such meetings are "best" held privately.

Editor's Note: This story was updated at 8:15 a.m. CST with notes from the outdoor Mass at O'Higgins Park.

Related: NCR Podcast: Pope Francis in Chile and Peru; American Catholics surveyed
A version of this story appeared in the Jan 26-Feb 8, 2018 print issue under the headline: 'Pain and shame': Francis in Chile .

How can you, bishops?