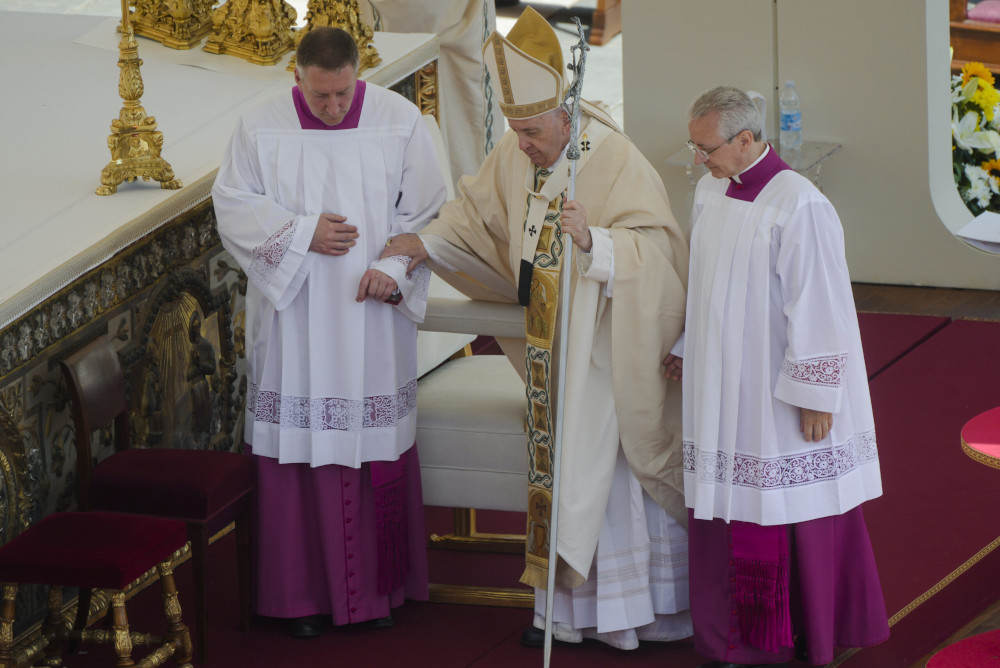 Pope Francis is helped walking as he celebrates the canonization Mass for 10 new saints in St. Peter's Square at the Vatican May 15. (AP/Gregorio Borgia)

While concerns regarding Pope Francis' health have fueled rumors he might soon resign, Brazilian bishops told Vatican media outlets on June 20 that the pope intends to continue in his role as head of the Catholic Church "for as long as God allows it."

Archbishop Roque Paloschi of Porto Velho said the pope reassured him during a visit at the Vatican on Monday that despite the many challenges the pope faces, resigning "does not cross his mind," according to an article published by Vatican News.

Seventeen bishops from Brazil will meet with the pope this month for traditional "ad limina" visits, obligatory consultations that bishops from around the world make on a rotating five-year schedule.

"I want to live my mission as long as God allows me and that's it," Francis said when asked about his health by the bishops, according to Roque.

In the same Vatican article, Msgr. Lúcio Nicoletto, the administrator of Brazil's Diocese of Roraima, said he was impressed by the "great strength" displayed by the aging pontiff, who during the meeting reinforced his commitment to protecting the Amazon rainforest and the Indigenous people who inhabit it.

In early June, Cardinal Óscar Andrés Rodríguez Maradiaga, one of the pope's cardinal advisers, said the resignation rumors amounted to nothing more than "fake news" and compared media reports on the subject to "a cheap soap opera."

Rumors of Francis' resignation have increased after the Vatican announced the cancellation of his planned July papal visit to Congo and South Sudan, citing knee pain. It's unclear whether the pope will make his expected journey to Canada later next month.

Francis began using a wheelchair in May, not long after the Vatican stated he was undergoing therapeutic injections aimed at lessening the pain in his right leg and knee. The pope has struggled for most of his adult life with sciatica, which has worsened with age. 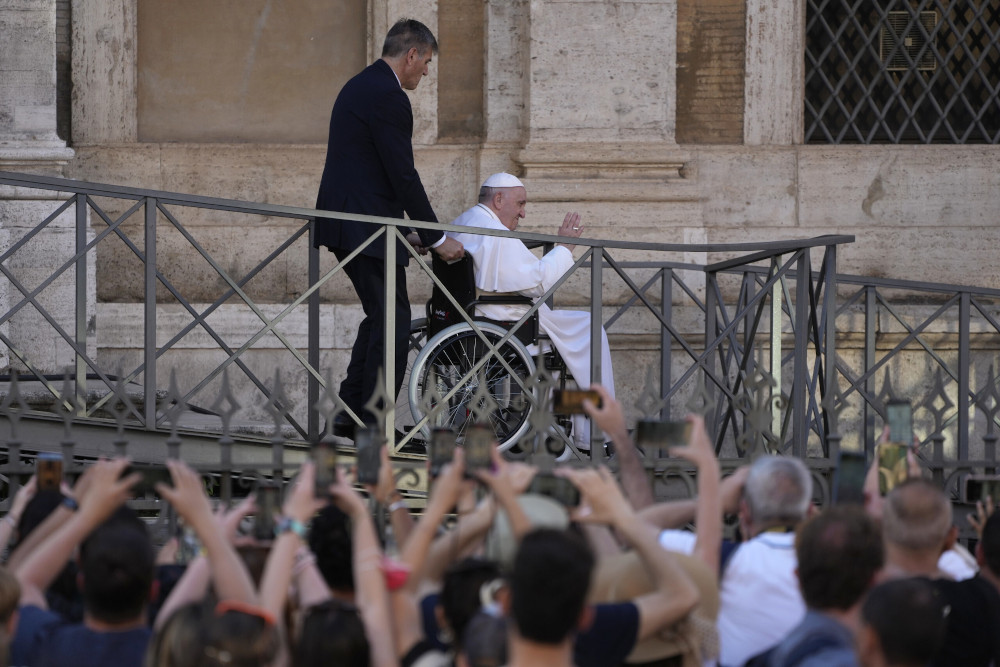 Pope Francis greets the faithful as he leaves St. Mary Major Basilica after participating in a rosary prayer for peace in Rome May 31. (AP/Gregorio Borgia)

Read this next: Knee pain places unusual limits on Francis, a pope used to being a 'street priest'

In July 2021, Francis was taken to the Roman hospital Gemelli for surgery and was kept under observation for 11 days.

Francis' predecessor, Pope Benedict XVI, shook the Catholic world and beyond when he announced his resignation as pope in 2013. In August, Francis will visit the Tomb of Celestine V, known for having resigned as pope in 1294, in the Italian town of Aquila. Four years before Benedict announced his retirement, he visited the same tomb.