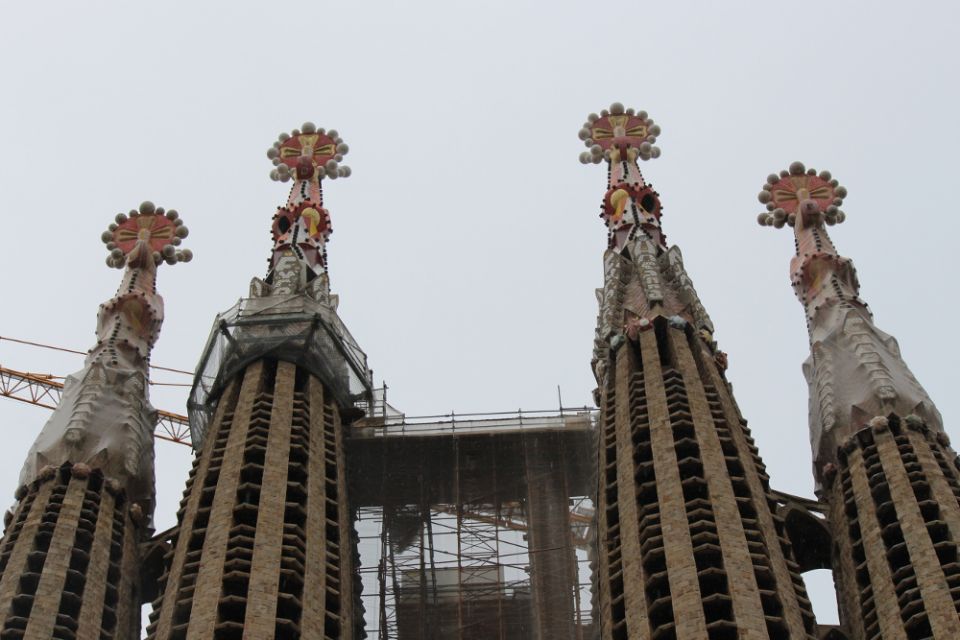 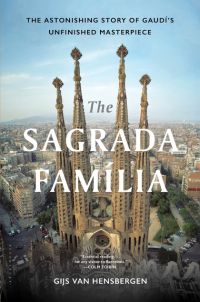 If all goes as planned, the Basilica of the Sagrada Família, begun in Barcelona, Spain, in 1882, will be completed in 2026. The edifice will reach 558 feet into the sky and become the world's tallest religious building.

Because Antoni Gaudí (1852-1926), the primary architect, believed that nothing manmade should ever be higher than God's work, the building's ultimate height will be lower than Montjuïc, the mountain that is Barcelona's highest point.

One of the world's most controversial structures, this basilica was named a UNESCO World Heritage Site in 1984 because of Gaudí's innovative and artistic ability.

Yet, as Gijs Van Hensbergen notes in The Sagrada Família, George Orwell considered the church "one of the most hideous buildings in the world." Pablo Picasso detested Gaudí's work. Salvador Dali, though, called Gaudí "the last great genius of architecture."

An art historian, university professor, tour guide and author, Van Hensbergen wrote Antoni Gaudí, a 2001 biography of the architect. In 2004, he published Guernica, a history of Picasso's celebrated painting. In his latest book, he offers a history of Gaudí's most famous accomplishment.

Part art and political history and part biography, the book points out various features of Gaudí's church, discusses them as artifacts, and ties them back to Spanish history, Roman Catholic Church teachings, and Gaudí's life, education and interests. The approach, though effective, is somewhat disorganized and confusing.

Proving his point, Van Hensbergen discusses everything from Gaudí's childhood, to his education, to his award-winning architectural work (generally in Barcelona). Gaudí grew up in Reus, where he received a traditional education in which he excelled in geometry. He learned craftsmanship by spending countless hours in his father's coppersmith workshop.

Gaudí also drew close to nature, observing plants, insects and animals — knowledge that came into play in his designs within the Sagrada Família. Some columns, for example, are decorated with carvings of green cypress leaves to symbolize immortality. 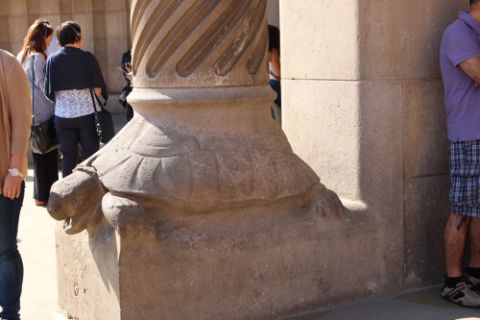 A turtle is seen at the base of a pillar of the Sagrada Família in Barcelona, Spain. (NCR photo/Toni-Ann Ortiz)

Gaudí studied architecture when, according to Van Hensbergen, Catholic art was "mired in a swamp of saccharine sentimentality." The official Catholic style was "full-blown kitsch," and could be traced back to Pope Pius IX's 1864 Syllabus of Errors, which claimed modernity as responsible for society's decadence.

Gaudí disdained kitsch partly because, as this book suggests, he had studied the philosophy of St. Thomas Aquinas and adhered to Aquinas' concept of beauty as having integrity, proportion and clarity.

For Van Hensbergen, Gaudí's genius lies in the marriage of his craftsmanship with his sense of religious poetry. Gaudí believed that God's divine presence was encrypted into the complex patterns and arcane geography of nature. He based the Sagrada Família on those patterns in order to make his church a way to find God on earth.

After he worked on the basilica for 43 years, Gaudí was hit by a tram and died at age 74. His work was not finished, but he left instructions for those who would follow him. The basilica still stands despite the Spanish Civil War, riots, attempts to destroy the church edifice, civil unrest, and, most recently, the August 2017 terrorist attacks on Barcelona, which some say had targeted the Sagrada Família.

Even though it is unfinished, this Catholic church is the most visited tourist attraction in Barcelona, attracting more than 3 million visitors a year.

Writing much of the book as if he were inside the Sagrada Família and taking readers on a tour, Van Hensbergen expounds on various features of the building. He notes abstract patterns and describes a mosaic as somewhere between a Gustav Klimt and a neo-Egyptian style of the 1920s.

He mentions Gaudí's influences as well as his innovations. He writes that the modified Gothic windows illustrate Gaudí's attempts to soften hard angles with circular elements. He discusses the basilica's spires and how their organic, undulating shape suggests Gaudí's imagination at work. Columns, he observes, seem to sprout from a tortoise shell — instead of crushing it. Gaudí interlinks parabolic arches with slanting columns, making the sanctuary look like a forest of stone.

Van Hensbergen notes the symbolism built into the church with its towers suggestive of the 12 apostles. He points out a statue of Mary holding the naked child Jesus over his bath, as opposed to the fully clothed image that one generally sees. He notes that Gaudí's angels do not have wings.

Ultimately, Van Hensbergen hopes to explain what he calls Gaudí's most quixotic work — "as mystifying as the visions that St. John recorded on Patmos which were later transformed into the Book of Revelation."

Throughout the book, Van Hensbergen grapples with two concepts as he tries to explain the art behind the architecture and the religious notions behind the spirituality. It's a tall, if not impossible, order, especially because the book contains no photographs — an egregious fault in a book like this. It makes one realize the truth behind the adage that a picture is worth a thousand words.

Unfortunately, Van Hensbergen has only words to convey the immense power he feels in this imposing structure. Fortunately, he chooses those words well.

[Diane Scharper teaches poetry and memoir for the Johns Hopkins University Osher Program. She is the author of several books including Radiant, Prayer Poems.]

Bob Dylan explores death to self in 'Rough and Rowdy Ways'