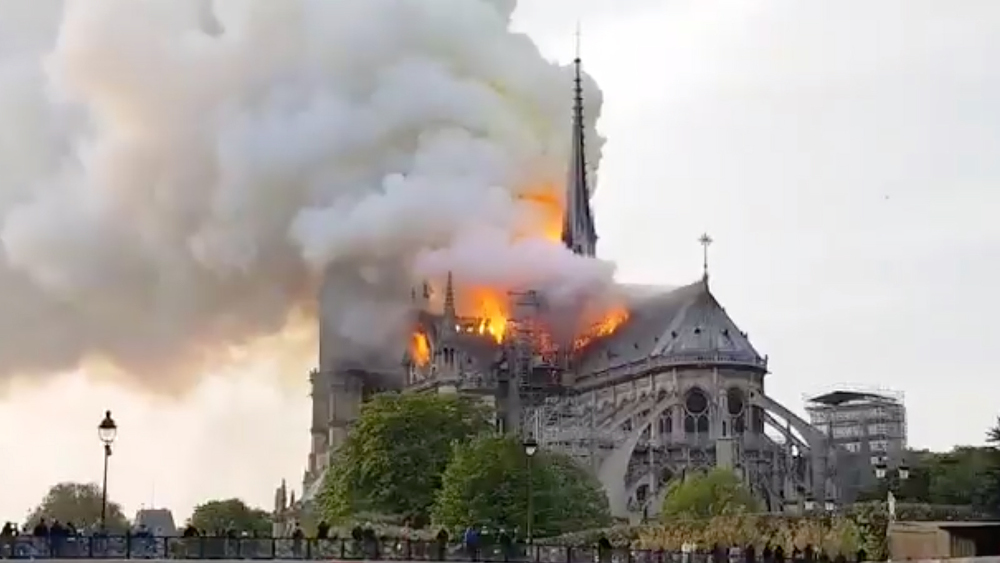 A massive fire engulfed the 850-year-old Notre Dame Cathedral in the heart of Paris Monday evening (April 15), destroying the entire wooden frame of one of Christianity's most beloved monuments.

Parisians stood in the street and watched as smoke and flames billowed from the top of the cathedral, behind its iconic entryway with the famous rose window. After sunset, they gathered to sing the Ave Maria in French.

The cause was not known, but it was thought to be linked to a $6.8 million renovation project.

Notre Dame spokesman Andre Finot told French media the entire wooden interior of the 12th-century landmark was likely destroyed: "Nothing will remain from the frame."

Earlier, the spire had also collapsed. Its landmark rectangular towers appeared threatened as were its priceless stained glass windows.

The medieval cathedral on the Île de la Cité in the middle of the Seine river may be one of the most famous churches in the world and one of the finest examples of French Gothic architecture. It attracts more than 12 million visitors a year.

But it was also beginning to crumble. Last year leaders issued an urgent call for funding to restore it. The statues of the 12 Apostles and four Evangelists that stood around a steeple erected in the 1840s were lifted away by cranes last week.

The cathedral was begun in 1163 and completed by 1260. It still serves as a Catholic Church and is the seat of the Archbishop of Paris, Michel Christian Alain Aupetit.

"Noble in architecture and art, it has long been a symbol of the transcendent human spirit as well as our longing for God," the president of U.S. Bishops’ Conference, Cardinal Daniel DiNardo, said in a statement. "Our hearts go out to the Archbishop and the people of Paris, and we pray for all the people of France, entrusting all to the prayers and intercession of the Mother of God, especially the firefighters battling the fire."

The fire alarm went off around 6:30 p.m., local time. Firefighters rushed to the scene.

The fire came a day after Palm Sunday celebrations and less than a week before Easter. It triggered waves of emotion on social media with people lamenting the loss of a cultural and religious jewel.

Archbishop Éric de Moulins-Beaufort, a native of Paris who was just elected head of the French bishops' conference on April 3, was vicar general and auxiliary bishop of Paris for 10 years before taking over the archdiocese of Reims last August. 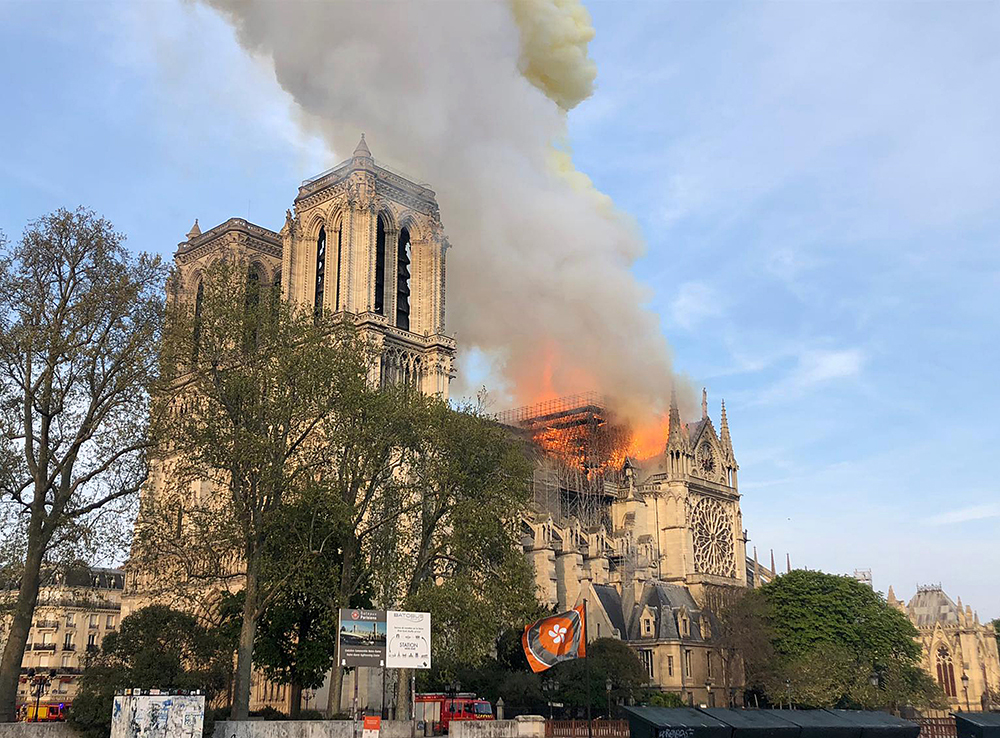 He lamented the destruction caused by the fire

"It's a part of our own flesh that has been damaged?" said Moulins-Beaufort. "There is something terrible about seeing the work of the centuries destroyed."

Vatican officials reacted with dismay over news of the fire and also asked for prayer.

"The Holy See has learned with disbelief and sadness the news of the terrible fire that ravaged Notre Dame Cathedral, a symbol of Christianity, in France and in the world," said the Vatican in a statement. "We express our closeness to French Catholics and to the Parisian population. We pray for the firefighters and for all who do their best to face this dramatic situation. "

This is not the first time the church has suffered damage. Its religious imagery were sacked during the French Revolution, and it has undergone numerous renovations. 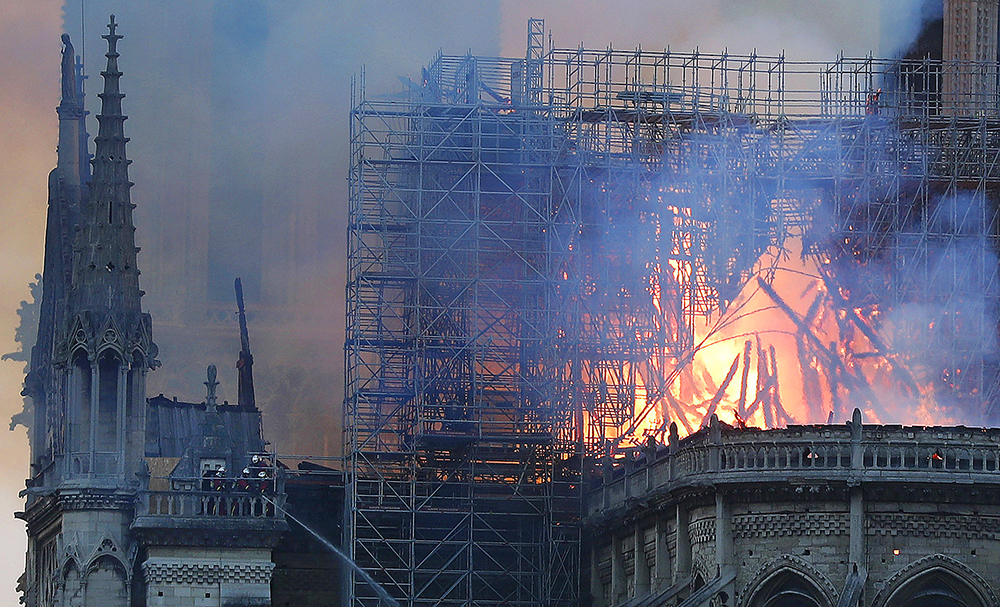 Firefighters, left, tackle the blaze as flames and smoke rise from Notre Dame cathedral as it burns in Paris on April 15, 2019. (AP/Thibault Camus)

But Monday's blaze may be its most catastrophic.

French President Emmanuel Macron cancelled a scheduled televised speech to the nation about much-discussed reform plans and rushed to the scene.

"Notre Dame de Paris in flames. Emotion of a whole nation," he tweeted, according to French media reports. "Thought for all Catholics and for all French. Like all our compatriots, I am sad tonight to see this part of us burn."

(The Associated Press contributed to this report.)