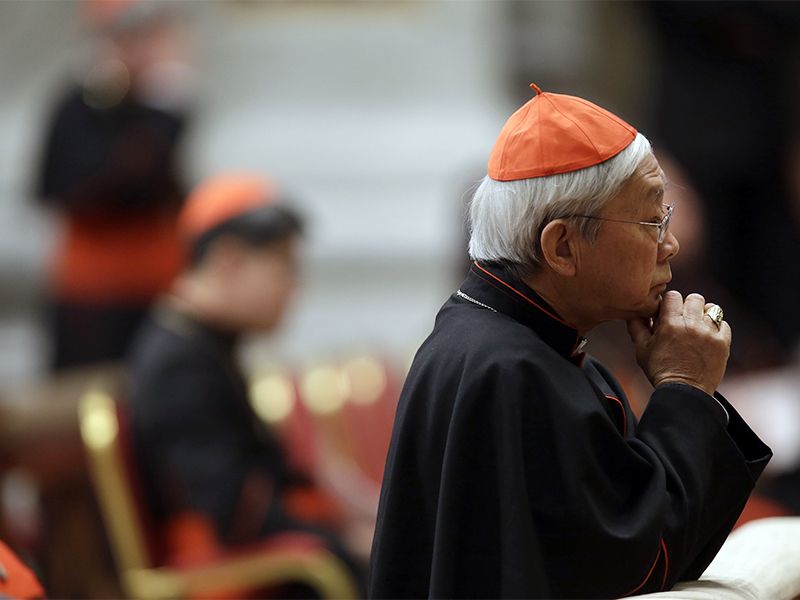 In this March 6, 2013 file photo, Cardinal Joseph Zen prays in St. Peter's Basilica during a vespers celebration at the Vatican. Hong Kong’s retired cardinal has revealed the behind-the-scenes drama of the Vatican's efforts to improve relations with China, including its request for a legitimate bishop to resign in favor of an excommunicated one who is recognized by Beijing. Cardinal Joseph Zen, a vocal opponent of Pope Francis' opening to China, bitterly criticized the changing of the guard in Shantou diocese and said in a Facebook post Monday, Jan. 29, 2018 that he traveled to the Vatican Jan. 10 to personally discuss it with the pope. (AP/Gregorio Borgia)

Vatican City — The retired cardinal of Hong Kong has revealed the behind-the-scenes drama of the Vatican's efforts to improve relations with China, including its request for a legitimate bishop to retire in favor of an excommunicated one who is recognized by Beijing.

Cardinal Joseph Zen, the most vocal opponent of Pope Francis' opening to China, bitterly criticized the proposed changing of the guard in Shantou diocese and revealed in a Facebook post Monday that he had traveled to the Vatican earlier this month to personally raise it with the pope.

Zen confirmed reports by the AsiaNews missionary news agency that the Vatican had asked Shantou Bishop Peter Zhuang Jianjian, 88, to step down in favor of Bishop Joseph Huang Bingzhang. Huang was excommunicated by the Vatican in 2011 after he was consecrated without papal approval.

Zen said that he was exposing the "confidential" information — including the contents of his Jan. 14 audience with Francis — so that the Chinese faithful "may know the truth to which they are entitled."

"My conscience tells me that in this case, the right to truth should override any such duty of confidentiality," he wrote.

The issue of bishop nominations is the key stumbling block in Vatican-Chinese relations that were officially severed when Beijing ordered Chinese Catholics to cut ties with the Holy See soon after the foundation of the Communist state in 1949.

The Vatican insists only the pope can nominate successors to Christ's apostles. China views the Vatican's insistence as interference in its sovereignty.

Popes from John Paul II onward have expressed hope for restoring diplomatic ties, with Pope Benedict XVI taking the boldest step in 2007 by urging the millions of Chinese Catholics worshipping in both the state-controlled aboveground and the oft-persecuted clandestine underground churches to unite under his jurisdiction.

Francis is taking that overture further to try to reach a deal with the state-backed Chinese Patriotic Catholic Association.

"Do I think that the Vatican is selling out the Catholic Church in China?" Zen asked in his post. "Yes, definitely, if they go in the direction which is obvious from all what they are doing in recent years and months."

The Vatican spokesman, Greg Burke, declined to comment, or to confirm or deny the AsiaNews report.

The news agency, which follows the Catholic Church closely in China, reported earlier this month that a Vatican delegation was in Beijing in December to negotiate Zhuang's retirement and Huang's nomination in Shantou.

In addition, the Vatican asked the legitimate bishop of Mindong, Monsignor Joseph Guo Xijin, to accept a demotion to become an auxiliary bishop to Bishop Vincent Zhan Silu, who isn't recognized by the Vatican, the agency said.

But Zen wrote that when he raised the cases with Francis during a Jan. 14 private audience, the pope said he had told his aides "not to create another Mindszenty case" with regards to the Chinese bishops.

The reference was to the Hungarian Cardinal Josef Mindszenty, who was imprisoned by Hungary's communist rulers and, during a brief spell of freedom during the revolution of 1956, took refuge in the U.S. Embassy in Budapest. Pope Paul VI eventually stripped him of his titles under pressure from the Hungarian government.

Zen said he felt encouraged by Francis' refusal to allow a similar fate to befall China's underground churchmen. "His words should be rightly understood as of consolation and encouragement more for them than for me," he said.

The government-recognized bishop of Mindong, Vincent Zhan Silu said he didn't know about the changes.

"What I know is that China and Vatican remain in contact and are negotiating on some relevant issues. As for how far the negotiations have gone and how to carry out personnel exchanges, I am not sure about that," he told The Associated Press.

Calls to the ethnic and religious authorities in the two dioceses went unanswered. There was also no answer at the China Patriotic Catholic Association.

Faith in Christ isn't professed in words but in deeds, pope says