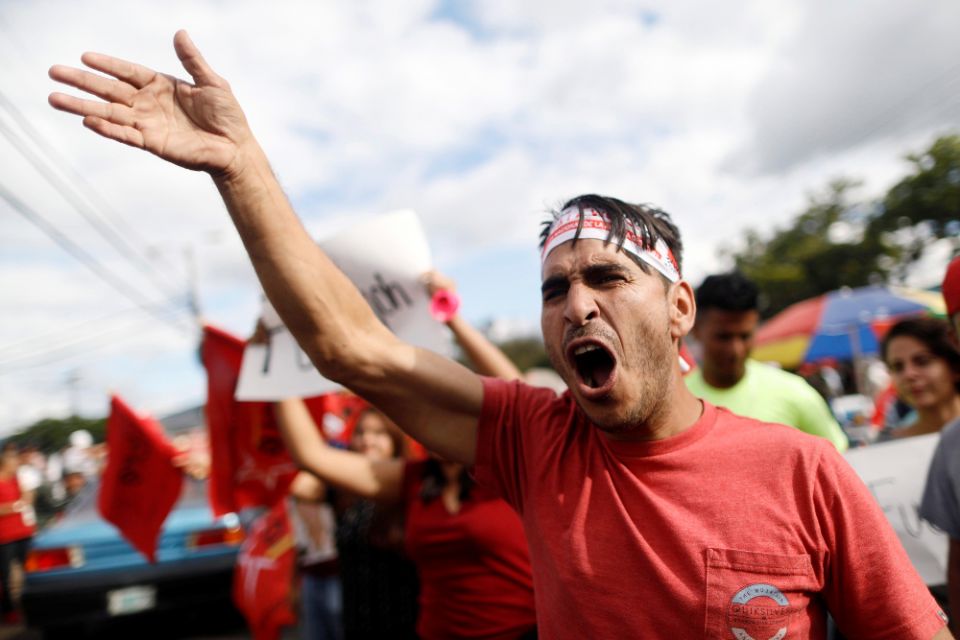 Honduras is operating under a state of siege following a volatile presidential election in which the apparent winner's margin of victory mysteriously evaporated in favor of the incumbent rightwing president, Juan Orlando Hernández.

U.S.-trained and financed Honduran security forces have been out in force since Dec. 1 when Hernández imposed a 6 p.m. to 6 a.m. curfew, expanded police and military powers and suspended the constitutional right of Hondurans and the media to move freely in the country.

At least a dozen people have been killed, scores injured and more than a thousand arrested in the country's worst political crisis since a 2009 U.S.-backed coup triggered a violent crackdown on social and political activists.

He called on security forces to uphold the Constitution "against a tyrant who wants to be re-elected by force." And reports late Monday (Dec. 4) indicated that scores of National Police were refusing to enforce the curfew, although the military had not followed suit.

The Supreme Electoral Tribunal (TSE), controlled by Hernández's National Party, has yet to declare a winner, although it maintains that Hernández now has the most votes.

The day after the Nov. 26 election, one of the four Tribunal magistrates, Marcos Ramiro Lobo, said that after about 60 percent of the votes had been counted, Nasralla had an "irreversible" lead over Hernández, the US-backed favorite.

But then the Tribunal inexplicably stopped updating its website for more than a day. When it resumed releasing more returns, Nasralla saw his 94,000-vote lead had been cut in half, and the next day, Hernández emerged as the top vote getter.

Lobo, the dissenting magistrate, said he had "serious doubts" about the process and called for an independent audit.

Meanwhile, The Economist reported they obtained a leaked audio recording of a training session for members of Hernández's party who would be manning voting tables on election day. It talks of a "Plan B" which spells out five vote-rigging methods to boost their party's votes, including how to let National Party voters vote more than once, and how to spoil opposition ballots by adding extra marks.

"What everyone already knows is that a coup occurred," said Nasralla, whose party, The Alliance Against the Dictatorship, is an unusual coalition of left and right-center groups opposed to Hernández whose government has long come under fire for massive corruption, theft of social security funds and the brutal oppression of indigenous leaders and others.

The Alliance has called on the Tribunal to be fully transparent and recount the votes of some 5,000 polling stations, but it has so far refused to recount more than a fraction of votes.

Honduran Jesuit Fr. Ismael Moreno, the director of Radio Progreso, called the election reversal a "criminal fraud" and warned that it will be "catastrophic for the Honduran people" if the international community fails to drop the pretense of "impartiality and instead take an active role in demanding and observing a physical recount."

Calls for a recount have been mounting daily from officials of the Organization of American States, the European Union's electoral observer mission, and the United Nations High Commission for Human Rights, members of the U.S. congress, along with scores of international academics, and human right groups.

However, U.S. administration officials have not joined the international voices, so far making only tepid statements, but no calls for recounts.

The U.S. has had no ambassador in Honduras for months, but White House chief of staff, John Kelly, is a strong backer of Hernández, even calling him "a great guy."  Kelly, the former head of US Southern Command, collaborated with Hernández to curtail Honduran immigrants fleeing to the United States.  He sees Hernández as an ally, allowing the U.S. to maintain a significant military presence at Soto Cano Air Base, commonly known as Palmerola Air Base.

What's more, two days after the contested election, Secretary of State Rex Tillerson quietly certified that the Honduran government has been combating corruption and supporting human rights, paving the way for Honduras to receive millions of additional U.S. dollars, according to Reuters.

"This is an outrageous decision as the Honduran security forces attack peaceful protesters who are calling for transparency and ensuring that people's votes are respected," Dan Beeton, international communications director for the Center for Economic and Policy Research, told NCR.

"Protesters, dissenters, activists, journalists, and others have been getting killed in large numbers since the 2009 coup. So the ongoing certification of Honduras is a travesty," he said. "Corruption at the highest levels remains a serious problem; President Hernández was embroiled in a grave scandal over diversion of funds from the national health system into his own campaign coffers, just a few years ago. His brother has been implicated in involvement with drug money, and his security minister has been named in a US court as being involved in coke trafficking by a DEA informant."

The 2009 coup overthrew the democratically elected President Manuel Zelaya, a wealthy rancher who became unpopular with the elites for raising the minimum wage, among other measures.

The coup was justified with the false charge that he wanted to run for re-election, which is prohibited by the Honduran Constitution. In fact, Zelaya only proposed holding a nonbinding referendum on whether to change that prohibition.

Hernández, a strong coup supporter who won the 2013 election campaigns amid claims of voter fraud, created a political storm when declaring his candidacy for re-election this year.

Hernández contended his bid was legal because of a 2015 Supreme Court ruling that he said suspended the constitutional ban against reelection. But opponents said that the court had no such authority, that the change required a vote of the people, and that the full 15-member court did not vote, but only a five-member panel, most of whom were appointed by Hernández.

"They already stole the election from us once. We must not allow four more years of suffering and pain." -- Xiomara Castro

Zelaya, the ousted president, has campaigned for Nasralla, an industrial engineer turned TV star, whose running mate is Zelaya's wife, Xiomara Castro de Zelaya. She had finished second to Hernández in the contested 2013 race.

"They already stole the election from us once," Xiomara Castro told Aljazeera. "We must not allow four more years of suffering and pain like we have had to live these past four years."

Among other goals, the Alliance wants to implement free health care for the poor, and end corruption and impunity, prosecuting those behind hundreds of assassinations since the coup, including the killing of activist Berta Cáceres, who spearheaded campaigns to stop the plundering of indigenous lands by various mining, hydroelectric and logging interests.

Hernández has promised to build new prisons and boasted that he has dramatically cut the murder rate using the military.

That strategy came under fire in a May 30 report this year by the Carnegie Endowment for International Peace, "When Corruption is the Operating System: The Case of Honduras."

Its conclusion was that the Honduran military "is an instrument for the consolidation of power," used to patrol indigenous communities, suppress protests, curtail the exercise of free speech, and, "most broadly (via Hernández's new Military Police for Public Order), to assume a wide variety of domestic security and policing roles."

Human rights groups say the current military crackdown on dissent is a blatant means to steal the election.

Hernández contends that the curfew and curtailment of the constitutional rights are needed "to guarantee the safety of the people" and respond to post-election unrest and violence by protestors.

Nasralla, however, says that government infiltrators and provocateurs have sparked the violence and vandalism being cited to justify the crackdown.

One U.S. Congresswoman, Rep. Jan Schakowsky of Illinois, described what Nasralla was up against in a New York Times op-ed piece: "Hernández and his allies control the much-protested ballot-counting process, the election oversight commission, the army — which under Honduran law moves the ballots — and all appeals processes. Given his total control over the election process, we can't expect him and his corrupt manipulators to allow a free and fair election to decide their fate."

In a later posting on her website, she expressed her hope "that our State Department can for once put aside their blind support for President Juan Orlando Hernández and evaluate this election fairly."

As elections approach in Somalia, bishop sees signs of hope