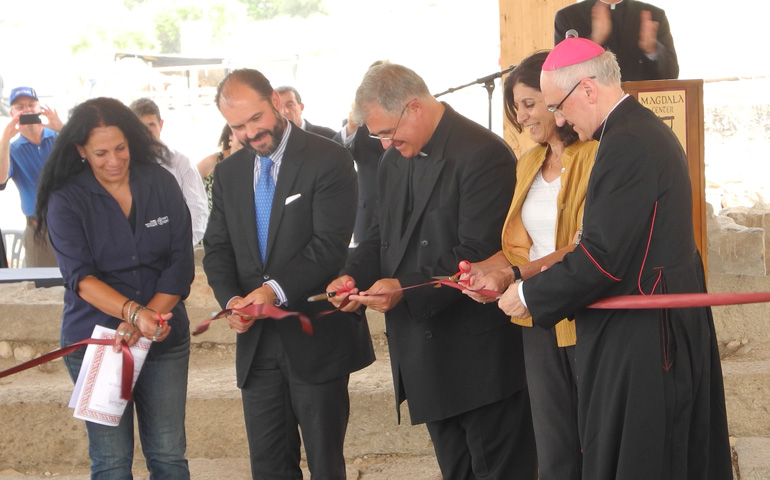 Holy sites in Jerusalem are crowded on top of each other, fighting for space and attention amid crowds of souvenir sellers and falafel shops. But up north, near the Sea of Galilee, the sites where Jesus performed his miracles are spread out among nature next to the gentle waves of the lake.

On Wednesday, Legionary Fr. Juan Maria Solana of Mexico dedicated a spirituality center on the shore of the Sea of Galilee that will create a space for pilgrims to reflect during their journey in the Holy Land. The spirituality center is part of an enormous project called the Magdala Center, believed to be located at the biblical home of Mary of Magdalene, which will eventually include an archaeological park, a 300-person hotel, a women's institute, a restaurant and a multimedia center.

Solana originally purchased the land to build a retreat near the area of Migdal, a biblical fishing village and home to Mary (Migdal is the name of a nearby modern Jewish town, as well). The site he eventually purchased was close to the areas where Jesus visited, and that was enough, he reasoned.

But then archeological surveys, which are required by the state of Israel before construction, unearthed evidence of a building believed to be a synagogue from around the year A.D. 40. A row of stores near the synagogue led archaeologists Dina Avshalom-Gorni and Arfan Najar, both from the Israeli Antiquities Authority, to conclude that this area probably had been a city center.

Rather than be close to the town of Migdal, the site could actually be the biblical Migdal, they told Solana.

"Jesus came here, and in this synagogue, he was actually here," Najar told NCR on a tour of the site before the dedication. Najar said the New Testament references that Jesus preached at a number of synagogues across the Galilee, but this is the only one in the area that the archaeologists have discovered from this time period.

First-century synagogues are a rarity, and this is only the seventh synagogue found from this period in Israel.

Plans for the Magdala Center began in 2005, and construction began in 2009. Originally, part of the spiritual center was planned for the area where archaeologists discovered the synagogue, Najar said. The center was moved closer to the water to avoid the archaeological dig.

The center will have a special emphasis on women in the church. Mary of Magdelene was mentioned 14 times in Jesus' Gospel, Solana said.

The spirituality center is called Duc In Altum, a Latin phrase meaning "cast into the deep," referencing a section from Luke where Jesus instructs Simon: "Put out into the deep, and let down your nets for a catch" (Luke 5:4). On Monday, Pope Francis blessed the boat-shaped altar, which was brought to Jerusalem during the pope's three-day trip to the Middle East.

"I hope that Magdala will be pronounced once more by all the people around the world, people who have come and visited this project, whose soul has witnessed this miracle and this archaeological miracle," Solana said during the dedication ceremony. Solana also has overseen the Pontifical Institute Notre Dame of Jerusalem Center since Pope John Paul II awarded the building to the Legionaries of Christ in 2004.

Eduardo Guerra, the assistant director of the Magdala Center, said the cost of the entire project will be around $100 million, and the Legionaries have already invested $40 million.

He added that the Magdala Center was the result of a Pope John Paul II's request to improve the pilgrim experience in Israel, especially around the Sea of Galilee.

"It's not the same like having the Notre Dame center in Jerusalem, which is very spiritual ambiance," Guerra said. "We don't have enough rooms, so many of the pilgrims have to go for a common hotel."

Christian tourists accounted for 59 percent of those who visited Israel in 2013. The vast majority, 89 percent of all Christian tourists, visited Tiberias and the Sea of Galilee. And the Israeli Ministry of Tourism is expecting that Pope Francis' visit will encourage more Christians to visit Israel.

"The visit gave Israel and the Holy Land a very good exposure," Pini Shani, director of the overseas and religious department of the Ministry of Tourism, told NCR. "He's the most important figure in [the] Catholic world, and it says to [the] rest of Catholic world that it's OK to come here, they need to see the place."

Shani agreed that more accommodations are needed in the north of Israel, especially around the Sea of Galilee.

On Wednesday, the Latin Patriarch of Jerusalem, Fouad Twal, presided over the dedication Mass in the new spiritual center.

Religious leaders from across Israel, including Jewish, Druze and Muslim leaders, the mayor of the modern Jewish Migdal, and representatives of the government and the Israel Antiquities Authority gathered for the ribbon-cutting ceremony of the archaeological park.

Ahuva Zaken, the deputy director general of the Ministry of Tourism, noted the site celebrated the cooperation between Christian and Jewish communities, both in biblical times as well as today.

"We are fortunate to have the Bible as our tour guide and the history of our people as our itinerary," she said.

A version of this story appeared in the Aug 29-Sept 11, 2014 print issue under the headline: Digging in on Galilee's shore.