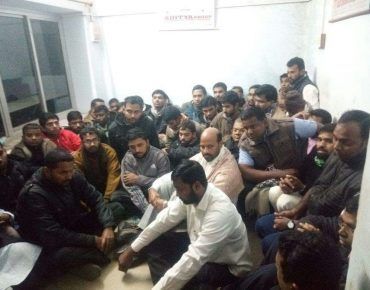 Seminarians and priests inside the police station (Matters India)

The group of 30 seminarians and two priests were detained as they traveled along the main road of the town of Satna visiting Christian institutions and singing carols, a normal exercise in this district at this time of year.

The police took them to the Civil Lines police station following a complaint from right-wing Hindu activists, who accused them of being involved in religious conversions, a charge often leveled against Christians to target them.

Later, police took into custody another group of eight priests who went to the station to inquire about the seminarians.

The seminarians and priests were still inside the police station after midnight.

The carolers come from St. Ephrem’s Theological College in Satna, about 280 miles northeast of Bhopal, capital of Madhya Pradesh.

The college trains priests primarily for the mission dioceses and religious congregations of the Syro-Malabar Church in northern India. Groups of seminarians have caroled in neighboring villages during the Advent and Christmas season since the college opened in 1992.

[Matters India is a news portal focusing on religious and social issues in India.]