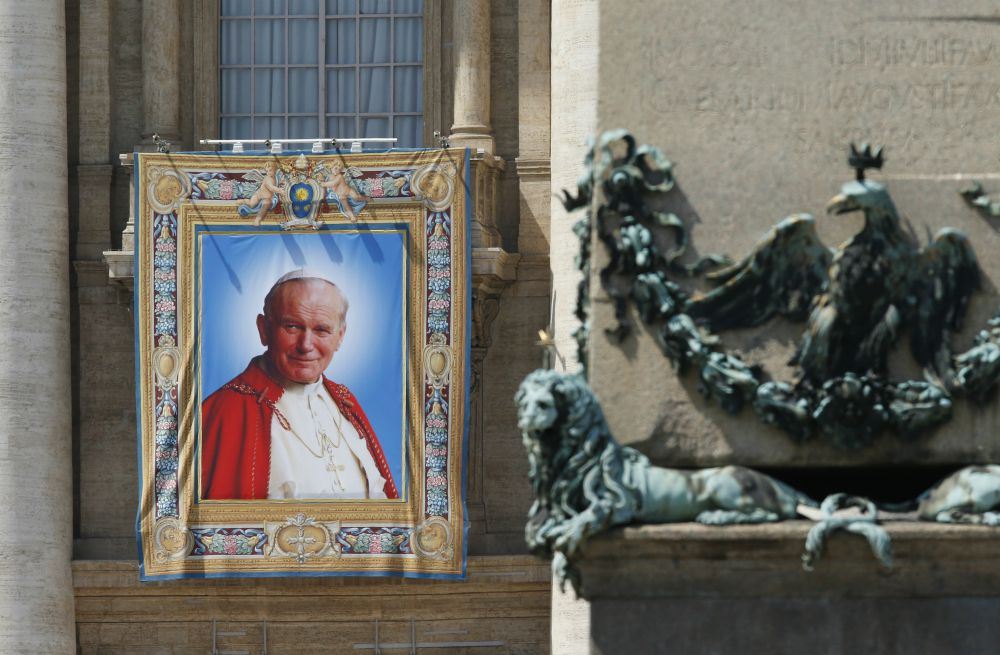 A banner depicting then-Blessed John Paul II hangs from the facade of St. Peter's Basilica at the Vatican April 25, 2014. At right are the sculptures at the base of the obelisk in St. Peter's Square. (CNS/Paul Haring)

I noted previously that the opposition to the synod on the Amazon was a manifestation of the more general anti-Francis attitude of certain conservatives. And, to my charge, we can now add the indictment of racism as seen in this bizarre rant from Bill Donohue of the Catholic League. Twitter also had some ugly racist tropes, some of them being spread by clergy. I was grateful to, and proud of, my The Tablet colleague Chris Lamb for apologizing to the indigenous representative at the Holy See press conference for this offensive behavior.

Other criticisms have not been explicitly racist, but either condescending to the indigenous cultures or inordinately afraid of syncretism. EWTN's Raymond Arroyo could be counted on for this kind of ridiculousness, as he and Fr. Gerald Murray fretted about a tree planting ceremony that they, and other papal critics, considered pagan. J.D. Flynn at the Catholic News Agency picked up this refrain, noting "the identifiably Christian aspects of the [Amazonian, indigenous] rituals have often taken place alongside unidentified images and sculptures, and with the incorporation of rituals of unclear origin. That has led to confusion." The charge of confusion has been leveled at Francis before, always by people who like their religion black or white. Why is the carved image of a pregnant woman so tantalizing to these critics, but they have not a second thought for the Egyptian obelisk in the center of St. Peter's Square, nor the fresco of the Delphic oracle in the Sistine Chapel? Remember that philistines in earlier generations wanted the nudes on the Sistine Chapel covered.

Other criticisms came more from the fringe, but echoed the same talking points. An event held by the conservative umbrella group Voice of the Family accused the synod of perpetrating "poly-demonism." This may be, as Flynn said, "hyperbolic and overwrought" but it is a difference of degree, not kind, from the concerns Flynn voiced.

The common theme from all these critics is that in seeking to evangelize and accompany the people of the Amazon, we should remember that we are the ones with the truth, that they are the ones who need instructing, that their pagan ways must be "overthrown" and replaced with Christian, read Western, ways. And, of course, all this is Pope Francis' fault.

What is missing from all these criticisms is any awareness of the fact that the Catholic Church does not, in fact, view indigenous cultures with such horror, and core teachings of our faith posit that God is active in every culture, indeed, in every human heart.

Consider how the Vatican's Congregation for Divine Worship and the Disciple of the Sacraments dealt with the need to recognize that the seeds of the Gospel are already present in every culture. A 1994 document "Inculturation and the Roman Liturgy," stated that the qualities and gifts of each people are not negated. Inculturation "strengthens these qualities, perfects them and restores them in Christ. On the other hand, the church assimilates these values when they are compatible with the Gospel, "to deepen understanding of Christ's message and give it more effective expression in the liturgy and in the many different aspects of the life of the community of believers." This double movement in the work of inculturation thus expresses one of the component elements of the mystery of the incarnation." The idea of a "double movement," or what we might term dialogue, is apparently unknown to Francis' critics, even though it was not unknown to St. Pope John Paul II who was the pope in 1994. N.B. The easiest place to find this text is at the EWTN library of ecclesial documents.

Perhaps reference to a dicastery's document is a little insufficient for the critics. How about an encyclical from John Paul II? When the Holy Father convoked two synods to discuss family life, conservatives were keen on citing John Paul II's encyclical Veritatis splendor to complain about the deficiencies they perceived in Francis' approach. For example, here and here. The critics have an intellectual fetish for the encyclical's concern to establish the category of "intrinsically evil acts," a category these same conservatives tend to abuse. But, in that same encyclical, we read this:

Indeed, as we have seen, the natural law "is nothing other than the light of understanding infused in us by God, whereby we understand what must be done and what must be avoided. God gave this light and this law to man at creation" The rightful autonomy of the practical reason means that man possesses in himself his own law, received from the Creator.

This natural law is accessible to all men and women, not only to Christians, but it is necessarily rooted in the divine law. In case you think John Paul II was having a bad theological hair day, the quotation is from St. Thomas Aquinas.

A little later on in that same encyclical, the pope quotes his predecessor Leo XIII's 1888 encyclical Libertas Praestantissimum on the universality of the natural law: "the natural law is written and engraved in the heart of each and every man, since it is none other than human reason itself which commands us to do good and counsels us not to sin." The reference is to each and every person, including the indigenous souls in the Amazon.

If a papal encyclical is not sufficient, how about a document from an ecumenical council? In the Pastoral Constitution on the Church in the Modern World, Gaudium et spes, there are several passages that invoke the natural law, Christ's salvific presence in all of creation, and that the church can profit from all human endeavor and learning, except sin. Here are just a few of such passages:

For by His incarnation the Son of God has united Himself in some fashion with every man. He worked with human hands, He thought with a human mind, acted by human choice and loved with a human heart. Born of the Virgin Mary, He has truly been made one of us, like us in all things except sin.

… All this holds true not only for Christians, but for all men of good will in whose hearts grace works in an unseen way. For, since Christ died for all men, and since the ultimate vocation of man is in fact one, and divine, we ought to believe that the Holy Spirit in a manner known only to God offers to every man the possibility of being associated with this paschal mystery.

… Since all men possess a rational soul and are created in God's likeness, since they have the same nature and origin, have been redeemed by Christ and enjoy the same divine calling and destiny, the basic equality of all must receive increasingly greater recognition.

… Moreover, since in virtue of her mission and nature she is bound to no particular form of human culture, nor to any political, economic or social system, the Church by her very universality can be a very close bond between diverse human communities and nations, provided these trust her and truly acknowledge her right to true freedom in fulfilling her mission.

… The experience of past ages, the progress of the sciences, and the treasures hidden in the various forms of human culture, by all of which the nature of man himself is more clearly revealed and new roads to truth are opened, these profit the Church, too. For, from the beginning of her history she has learned to express the message of Christ with the help of the ideas and terminology of various philosophers, and has tried to clarify it with their wisdom, too. Her purpose has been to adapt the Gospel to the grasp of all as well as to the needs of the learned, insofar as such was appropriate. Indeed this accommodated preaching of the revealed word ought to remain the law of all evangelization.

Still not convinced? How about something from sacred Scripture? In the Acts of the Apostles, we learn that St. Paul went to Athens. He did not take a sledgehammer to the Parthenon. Instead, when he went to preach at the Areopagus, he began by noting that he had found among the many pagan temples a modest altar "to an unknown God," and began to proclaim this unknown deity Jesus Christ. Or, perhaps we could consider the Nicene Creed: Is it a form of syncretism to confess that Jesus is "consubstantial" with the Father, an idea derived from pagan Greek philosophy, not Jewish or Aramaic thought?

In addition to these specific texts, ever since Aquinas encountered the pagan thinker Aristotle, natural law has been intertwined with revelation as a source of our Catholic moral teaching. Conservatives tend to view natural law narrowly and curiously do not follow Aquinas, who was far more inductive in his approach than they are. And it is an open question whether Aquinas made the claim that they do, namely, that the natural law can be apprehended by anyone, irrespective of their confessional status. Conservatives have not been shy about invoking this pagan-derived method of analysis as a source of Catholic teaching.

Why, then, are the conservatives all in a tizzy because Francis and some of the Amazon synod fathers believe it is wrong for the church to neglect the culture of the indigenous as a source of wisdom and specifically religious wisdom? Because it is Francis doing it. They are allowed to criticize the pope, of course, but they have no right to claim the mantle of Catholic tradition in criticizing him or the synod on this issue syncretism. Adopting the best in every culture is our Catholic tradition.