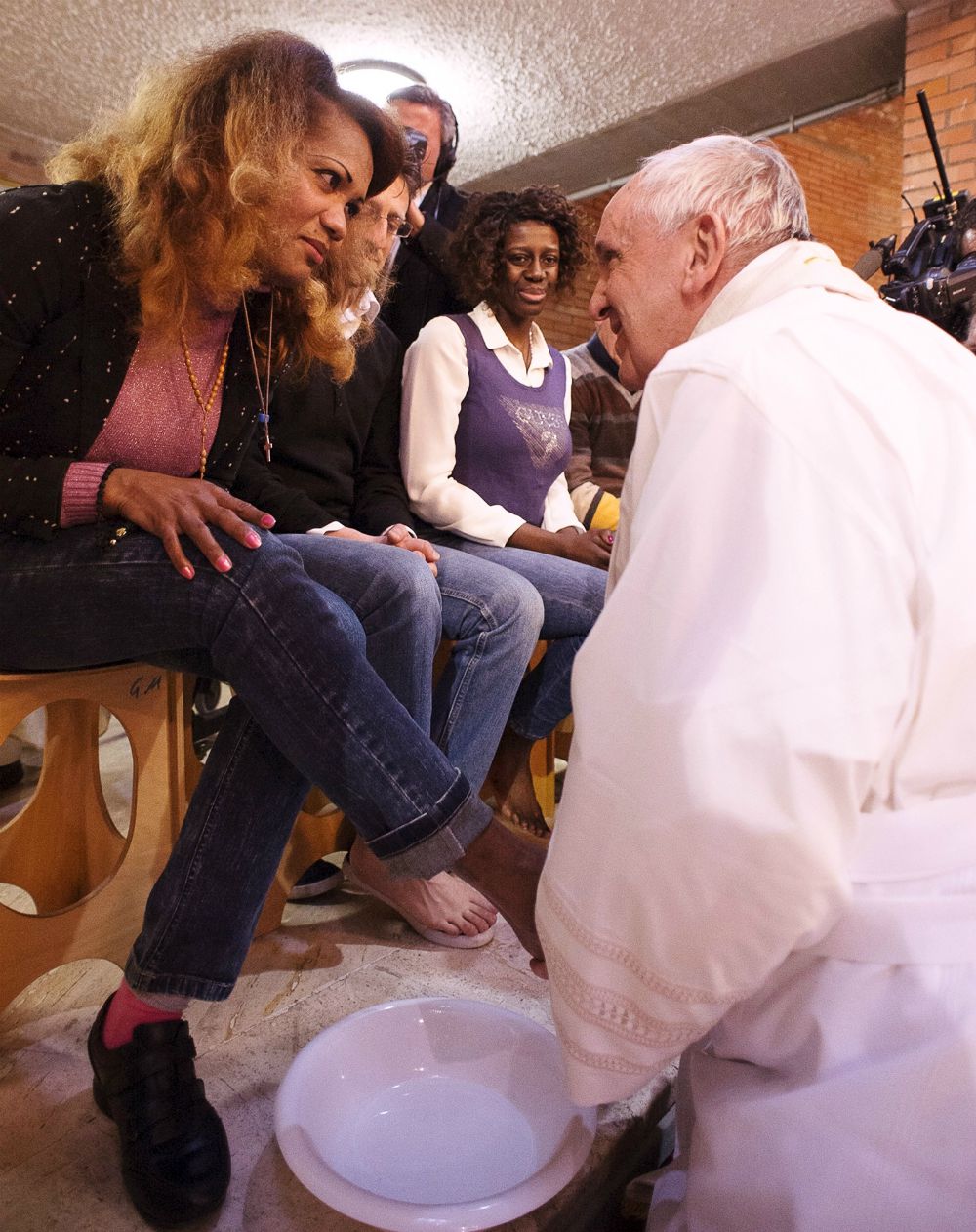 Pope Francis washes the foot of an inmate during the Holy Thursday Mass at Rebibbia prison in Rome, April 2, 2015. Following a request by Francis, the Vatican issued a decree Jan. 21, 2016, specifying that the Holy Thursday foot-washing ritual can include women. (CNS/Reuters via L'Osservatore Romano)

Yesterday, I discussed some of the key themes of last week's Amoris Laetitia conference at Boston College. Today, I would like to explore how the discussion, and the event itself, illustrated some tectonic changes in the culture of the Catholic Church and, as well, some of the outstanding problems that remain.

One of the most striking features of the conference was what was not said. The phrase "natural law" was uttered not once. I have noted previously that one of the remarkable things about Amoris Laetitia was the lack of references to natural law: It is mentioned once explicitly and alluded to in three other instances. This is a huge shift in Catholic theology. St. Pope John Paul II would include profound meditations on the Scriptures as part of his magisterial documents like Familiaris Consortio, but there remained a heavy reliance on natural law thinking once he turned to analysis of the situations confronted, especially family life. The pastoral ineffectiveness of natural law thinking is, I suspect, the reason its frames are being discarded.

Similarly, the "theology of the body" received only a couple of mentions and each time to point out how inadequate it is. Yet there are seminaries and campus ministries that make this the center of their teaching about sexual ethics. It is one of the outstanding challenges of those engaged in formation to come up with authentic, Catholic alternatives.

Another remarkable feature of the conference was the prominence given to lay and female voices. Eight lay people, six of them women, gave presentations. Of course, how else could you discuss family life without such input? But, for centuries, Catholic theology about family life has been the unique provenance of male, celibate clerics. The truth is not dependent upon the state of life of those discussing it, to be sure, but a lack of experiential knowledge is certainly an impediment to effective pastoral practice and it has led to the romanticization of married life that Professor Natalia Imperatori-Lee spoke about.

That image of Pope Francis washing the feet of a woman, who is in jail and not a Catholic, could well serve as the image that best represents this entire conference. The church must be at the service of families and marriages, but we must also leave our sanctuaries and our sacristies and go out to find those who, in this context, are hurting because their families are broken or sources of strife and pain.

Additionally, one of the presentations, offered by Professor Meghan Clark focused specifically on how the text of Amoris Laetitia does, and does not, meet the needs of women today. She applauded the fact that Pope Francis specifically rebutted the idea that the problems attending family life today are the result of efforts to emancipate women: "There are those who believe that many of today's problems have arisen because of feminine emancipation," the pope wrote at #54. "This argument, however, is not valid, 'it is false, untrue, a form of male chauvinism.' " That same paragraph speaks out against violence against women and such abhorrent cultural practices as female genital mutilation. Clark specifically applauded the pope for saying that the women's movement evidenced the working of the Spirit.

But Clark maintained the issue of women in the church remains, as she put it charitably, complicated. She noted that the U.S. bishops' conference withdrew its support for the Violence Against Women Act because the proposed legislation included protections for lesbians and transgender women. The fact that the Center for Disease Control estimates one-third of all women experience violence in their intimate relations was deemed less important to the leaders of the conference than the fear that they might be contaminated from their moral purity by associating with legislation that protects gay and transgender women. Clark also astutely noted the way a romanticized vision of family life can serve as a mechanism of clerical control.

This leads to another issue, one that was much commented upon at the Amoris Laetitia event: Where is the bishops' conference, the USCCB? They sent a staffer to the event, but why has the USCCB not sponsored similar explorations of the document, tapping the best theological minds in various regions of the country, furthering the implementation of Amoris Laetitia and beginning the task of pastoral conversion it sets forth? Other bishops' conferences have undertaken events similar to that at Boston College. Why not ours? I think we all know the answer: Too many bishops in the U.S. view this entire pontificate as a bit of bad weather, and they can't wait for it to pass.

Archbishop Charles Scicluna of Malta, in his presentation, said that the first theological principle stimulating him and his colleague in Malta to issue their guidelines for the implementation of Amoris Laetitia was "the principle of affective collegiality and communion with the Holy Father." Should all bishops operate out of such a principle? "Our Guidelines interpret Amoris Laetitia through the lens of the entire tradition of the Church," Scicluna continued. "The fresh presentation of doctrine in Amoris Laetitia cannot be interpreted adequately without taking into account the Gospel's core message of merciful love, the theological insights of Thomas Aquinas, the renewal of the Second Vatican Council, as well as the teachings of recent popes. The pastoral framework of our Guidelines reflects a 'hermeneutical continuity' rather than a 'hermeneutics of rupture.' "

The task of pastoral conversion is especially urgent when it comes to priestly formation. Many commentators spoke about the generational divide and of how many young priests see their role not as accompanying people, still less facilitating discernment, but as laying down the law. They are only too happy to replace another person's conscience instead of forming it. Franciscan Sr. Katarina Schuth addressed this issue in her remarks, and any bishop and vocations director that does not arrange to have a long talk with Schuth is engaging in malpractice.

The phenomenon of younger clergy (and not only clergy) resisting the pastoral conversion the pope is calling for is not limited to the United States. Said Msgr. Philippe Bordeyne, rector of the Institut Catholique in Paris: "I must confess that there is a gap between those who approve of the pope showing pastoral understanding towards family matters, and those who fear the pope might be fueling relativism by admitting that many people live in grey situations without being deprived from God's grace. In the second category, there is quite a number of young highly committed Catholics who expect from the pope a rhetoric of the ideal rather than a realistic view on the real situation of families." 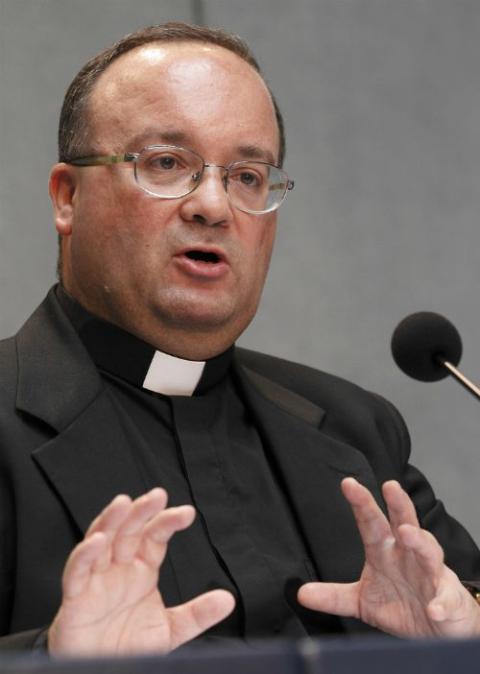 But Amoris Laetitia is almost uniquely helpful in the context of families in the U.S., as Cardinal Kevin Farrell mentioned. Speaking about the polarization in the U.S. church, the cardinal said Amoris Laetitia can contribute to a healthier culture in the U.S. "On the one hand, ours is a culture that has been characterized as partisan and polarized, bereft of heroes and ideals, where being consumed with the 'self' triumphs over the communal," Farrell said.

But on the other hand, our American culture is also one in which people help each other in numberless charitable ways and where the term 'first responders' is used to venerate all those who risk life and limb for others. To be faithful to the Catholic tradition in dialogue means that we need to have something to say and to stand for. Regarding marriage in our culture, this means standing for fidelity and permanent commitments in a 'hook-up' culture where computer apps offer opportunities for casual sex without commitments. Dialogue also means that we listen attentively to what the culture is saying about ways in which Catholic teaching has been distorted. It also means that we responsibly argue how Catholics are 'believers and belongers,' 'spiritual and religious,' respectful of all yet principled about the core of our beliefs.

Professor Richard Gaillardetz addressed the ecclesiological implications head-on in his presentation. He posited that Amoris Laetitia, and the synods that led to it, show that "a larger ecclesial vision is being enacted," one in which synodality is the organizational leitmotif and service is the method. Gaillardetz reflected upon Pope Francis' speech marking the 50th anniversary of the creation of the synod of bishops, an anniversary celebrated during the synod in 2015. "Strikingly absent in his papal addresses is any sacral rhetoric regarding the priesthood and ministry," Gaillardetz observed. "Rather, one hears a call to the church's ministers, at every level of ecclesial life, to go out and meet people, attentive to their brokenness and particular concerns and insights." Gaillardetz noted that in his address commemorating the synod, the pope's "choice here to associate the Christological character of presbyteral and episcopal ministry with Jesus' washing of feet, rather than its more typical association with the institution of the Eucharist, is suggestive of a quite different trajectory for theological reflection on ordained ministry." Synodality is no mere restructuring: It requires a church that listens and learns as well as teaches, indeed, a church that is able to teach because it has listened and learned.

That image of Pope Francis washing the feet of a woman, who is in jail and not a Catholic, could well serve as the image that best represents this entire conference. The church must be at the service of families and marriages, but we must also leave our sanctuaries and our sacristies and go out to find those who, in this context, are hurting because their families are broken or sources of strife and pain. We go out not because we are some kind of non-governmental organization bent on helping families. We go out because — to call attention to another image, one then-Cardinal Jorge Bergoglio shared with his brother cardinals before the conclave that elected him pope — when we think of Jesus knocking at the door, maybe he is knocking to get out. This conference set those in attendance (and hopefully those who will see the videos or read the papers) to the task of opening that door and letting the Body of Christ out, to walk the streets and dirty our feet and hands, serving the people of God whose experiences of family life can be sources of grace, if only someone will accompany them, encourage them, help them discern how God is already at work even and, especially, amidst the pain and the brokenness.

The critics are obsessed with the discussion about the divorced and remarried. That isn't the half of it.

Read this next: What I learned from organizing, participating in Boston's 'Amoris Laetitia' event
This story appears in the Amoris Laetitia feature series. View the full series.