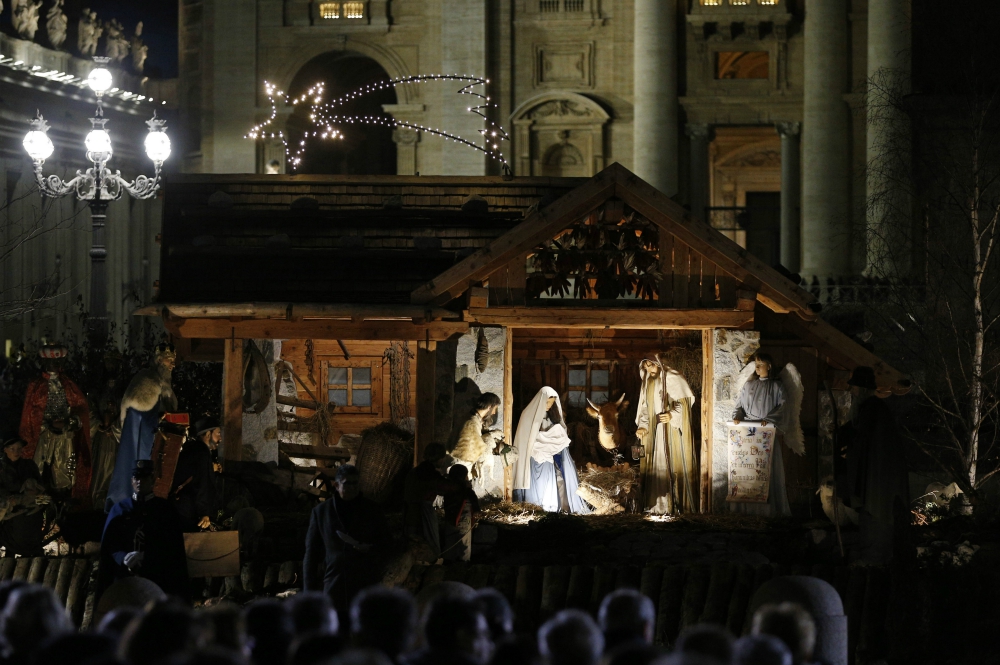 The Nativity scene is displayed during a Christmas tree lighting ceremony in St. Peter's Square at the Vatican Dec. 5. (CNS/Paul Haring)

Christmas draws near. The Advent candles, three purple and one rose-colored, adorn the altar. The "Gloria" has not been sung for three weeks now. The readings from Isaiah point us, as they pointed Israel, to the coming of the Messiah and the establishment of his kingdom. Along the Main Street in my town, most of the houses have candles in the windows, beckoning to the stranger that there is welcome from the bleak midwinter inside.

Outside the orbit of the church, a different Christmas has already arrived. The stores are crowded, on the weekends virtually impassable. FedEx and UPS trucks are omnipresent, delivering what was ordered on Cyber Monday. I noticed the first Christmas items at the grocery store the weekend after Halloween. The wreaths already have red ribbons, not purple. The lights of Christmas trees shine through the windows of many homes and, on the lawns, all manner of things appear, from inflatable Santas to wooden nutcrackers. Some houses are bedecked with garish lights.

It takes a conscious effort to preserve Advent and the sense of expectation that is proper to the season. It requires spiritual discipline to avoid the consumerism that has truly taken the Christ out of Christmas and replaced him with Mammon. In wrapping paper.

Our Holy Father, Pope Francis, has given us special assistance this year with a short apostolic letter titled Admirabile Signum. I confess I did not read the news story about it that we posted here at NCR Dec. 2. I do not even remember seeing the headline. But a friend encouraged me to read this short epistle from the pope and it is really quite wonderful.

The letter encourages us all to maintain or restore the tradition of erecting a crèche — in our homes, in our churches, in our schools. And he reflects on both the history of the crèche and, more importantly perhaps, the spirituality of the scene:

In a particular way, from the time of its Franciscan origins, the nativity scene has invited us to "feel" and "touch" the poverty that God's Son took upon himself in the Incarnation. Implicitly, it summons us to follow him along the path of humility, poverty and self-denial that leads from the manger of Bethlehem to the cross. It asks us to meet him and serve him by showing mercy to those of our brothers and sisters in greatest need (cf. Mt 25:31-46).

The pope asks us to reflect upon the scene, starting with the starry sky, and the themes of darkness and light that undergird our existential questions: Who am I? Where do I come from? Why do I love and suffer?

He asks us to consider the tradition of ruins surrounding, and in some cases even replacing, the cave in Bethlehem as the backdrop for the manger. "More than anything, the ruins are the visible sign of fallen humanity, of everything that inevitably falls into ruin, decays and disappoints. This scenic setting tells us that Jesus is newness in the midst of an aging world, that he has come to heal and rebuild, to restore the world and our lives to their original splendor."

The pope asks us to consider the role of the shepherds in the story of Christ's birth:

"Let us go over to Bethlehem and see this thing that has happened, which the Lord has made known to us" (Lk 2:15). So the shepherds tell one another after the proclamation of the angels. A beautiful lesson emerges from these simple words. Unlike so many other people, busy about many things, the shepherds become the first to see the most essential thing of all: the gift of salvation. It is the humble and the poor who greet the event of the Incarnation.

He notes that many people add additional figures and he believes that the most appropriate such figures are the poor. "First, there are the beggars and the others who know only the wealth of the heart," the pope writes. "They too have every right to draw near to the Infant Jesus; no one can evict them or send them away from a crib so makeshift that the poor seem entirely at home." Is this not an exquisite summation of Francis' teaching these seven years?

He discusses the importance of Mary and of Joseph, of placing the Christ Child into the manger at Christmas and the Magi at Epiphany. He offers concise reflections on the theological significance of the crèche and all of its parts, but the key thing is that the crèche is a means of passing on the faith. It is something so simple a child can grasp it.

"It touches our hearts and makes us enter into salvation history as contemporaries of an event that is living and real in a broad gamut of historical and cultural contexts," he writes.

One of the things that happened after the Second Vatican Council that I think we can now all view with some regret is the disappearance of much popular piety. We were not wrong to focus on the Mass, especially now that it was in the vernacular and we could understand it. But popular piety — statues and holy water in the home, pilgrimages, processions, family devotions — these are things that act as a kind of spiritual frame for the Mass. They do not compete with the Mass but support the faith required to discern the body and blood of Christ in the Eucharist.

Our Latino brothers and sisters did not abandon their popular piety as we in the cold north did. Who can fail to witness the fireworks and the mariachi bands and the hundreds upon hundreds of floral bouquets at the foot of the Virgin of Guadalupe last week and not recognize that the faith of our Latino brothers and sisters is alive in a way that faith in the Anglophone church is not?

Causality is a difficult thing to determine, but it is clear that one reason religion is on the ropes in the West is that we have become affluent. Last week, Jonathan Luxmoore had a great article here at NCR about the 30th anniversary of the collapse of communism in Eastern Europe. In it, he observed, "The church has had to contend with its own problems. Hopes of a mass religious revival, high in the first years after communist rule, faded as consumer lifestyles diluted popular enthusiasm."

"You cannot serve God and mammon," Jesus told his disciples (Matthew 6:24). Look around at what our consumer culture has done to Christmas and you will discern how prescient the Master was. Francis challenges us in so many ways, but always he challenges us to deepen our faith. This Advent, as we assemble our crèches, let that deepening of faith be our prayer.