Could not retrieve the oEmbed resource.
Opinion
Spirituality 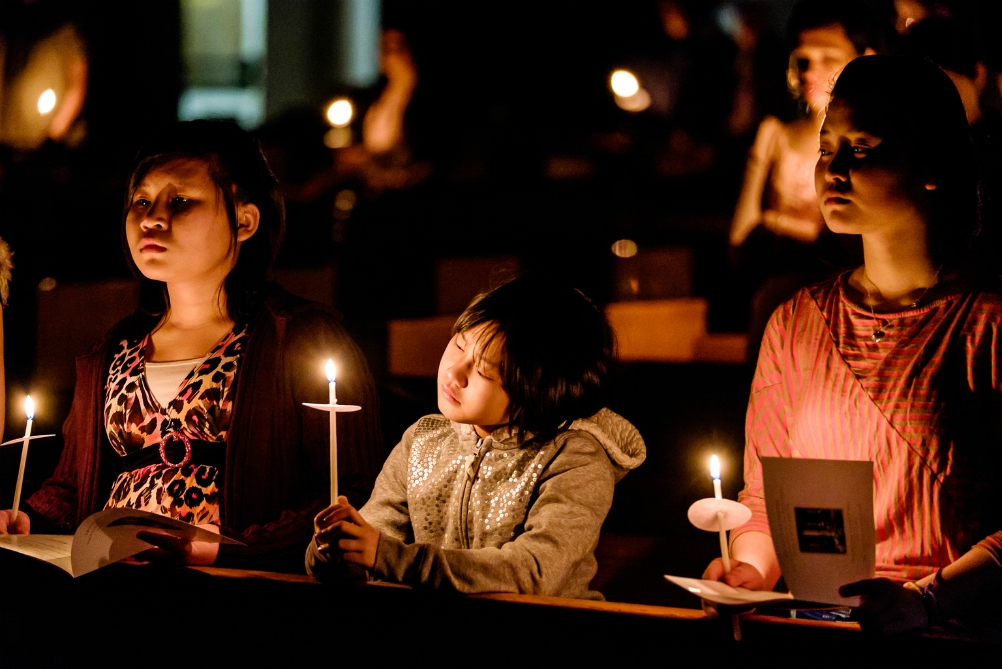 Young people hold candles during the Easter Vigil at the Cathedral of St. Joseph in Hartford, Connecticut, April 4, 2015. (CNS/Bob Mullen)

I forgot to mention something in yesterday's Good Friday column: Jesus had it coming.

If we approach the account of Jesus' suffering, death and resurrection from the standpoint we enjoy today, knowing how the story ends, then we see Jesus as the victim of injustice, the sinless man caught up in some psychodrama that went horribly wrong, or we dabble in those early beginnings of anti-Semitism by attributing motives to the religious elders of Jesus' time, assuming they acted as they did against Jesus to protect their social standing or some similar base motive.

In fact, the Jewish elders had good reason to be afraid. The Roman occupation was the greatest threat to the Jews' safety and identity as a people since the Babylonian exile and, indeed, disaster would come less than 40 years after Jesus' death with the destruction of the second Temple and of Jerusalem itself.

The centerpiece of Jewish identity and faith was the law and the Temple worship, and Jesus had challenged both. He had contradicted the religious obligations of his time, not only healing on the Sabbath, but justifying his actions by telling his followers that the Sabbath was made for man, not man for the Sabbath. He had promised he would destroy the Temple. The absconding, transcendent God of the Jews he dared to call by a familiar name, "Abba." He had dared to arrogate to himself a power no religious authority would have presumed to invoke, the power to forgive sins, a power that belonged only to God.

Now this Jesus had brought his blasphemies to Jerusalem. It was time to put him to the test. The religious leaders asked for a sign. Herod asked for a sign. Pilate asked for a sign. Dismas, the good thief, asked for that smallest but most tensile form of solidarity, remembrance, but the other thief tested Jesus in his last moments. Alas, do we not still put Jesus, and his church, to the test, demanding a sign and always a sign that conforms to our wishes and ambitions? How little has changed.

It was not only the religious authorities who failed to perceive Jesus as the savior. His own closest followers were convinced it was all over. During the debate on episcopal collegiality at the Second Vatican Council, the secretary of the Holy Office, Cardinal Alfredo Ottaviani, leader of the conservatives who wanted no changes whatsoever in the structures, liturgies and theologies of the church, rose to object to this new and pernicious doctrine. Solemn as ever, he told the assembled bishops: "I have searched the sacred Scriptures for some example of the apostles acting in a collegial fashion, and at long last I have found it." He paused for effect. "In the 14th chapter of the Gospel of Mark, Verse 50: 'And they all forsook him and fled.' "

The apostles were right to flee. This was not like some political leader who fails to accomplish all he or she should, like Franklin Roosevelt's inability to confront the racism of his party, or Barack Obama's failure to perceive the political and moral failure of his policy of deporting immigrants, or Hillary Clinton's mistake in not campaigning in Wisconsin. Jesus' mission was not unfulfilled, it was rejected. Utterly. His followers had no reason to look back with fondness on his teachings, and not just his teachings but his very self. They did not burn his books. They crucified the man.

And so, when someone says that they doubt the Resurrection, but they think of Jesus as a great teacher, ask them which other first-century crucified rabbi they cherish as a teacher? If they wish to be less embarrassed at this time of year by the claim of the early — and all subsequent — Christians that Jesus' resurrection was a bodily one, and so suggest a more sophisticated interpretation, that the resurrection was a metaphor, ask them if they have ever experienced their own bodies as a metaphor.

No, only a resurrection of the body would be enough to turn the apostles around from their fright and their flight, bring them back to the old Jerusalem and there experience the new Jerusalem. Only if we understand how totally — and understandably — rejected Jesus was on Good Friday can we grasp how radically different God's verdict was, and so make the joy of that first Easter our own.

The liturgy of the Easter Vigil — the lighting of the fire and the candles, the singing of the Exsultet, the readings from the Hebrew Scriptures recounting the history of salvation (and most especially the magnificent 55th chapter of Isaiah, the prophet at his existentialist best), the singing of the Gloria and turning on the lights, the return of the Alleluia after 40 days without it, finally the Mass, where this paschal mystery is not just remembered but reconstituted — this liturgy will be denied to us this year. Even if we watch it on television, it is not the same because liturgy is not something one does alone; it is something we do together, an unstated reminder that Jesus came to save a people, not a person, the vital link between ecclesiology and eschatology.

Unlike some of our evangelical friends for whom spirituality is all about "me and Jesus," our Catholic spirituality instructs us that the church, the ecclesia, is always an assembly, that Jesus came to save "us" not "me" or, better, only "me" because it is part of an "us," the "us" who follow the Magdalen to the tomb and have followed through the centuries. All these years later, we still hear the words of the angel addressed to Mary and Joanna and Mary, the mother of James — "Why do you seek the living amongst the dead? He is not here. He has been raised." — and hear them as words freshly spoken.

This year, we hear those words not with our friends and our families and the assembly of fellow Christians, not with our ears, but with our hearts, our lonely hearts.

In God's providence, he gave us a sort of road map for celebrating this greatest of feast days in such a lonely and miserable condition a couple of weeks back, when the Office of Readings for Friday in the fourth week of Lent contained this passage from one of St. Athanasius' Easter letters. Always beautiful, it seems almost as if had been written with a pandemic and consequent social distancing in mind, although his reference to those "far apart" referred only to the many churches of the ancient Christian world. Here is the excerpt:

Brethren, how fine a thing it is to move from festival to festival, from prayer to prayer, from holy day to holy day. The time is now at hand when we enter on a new beginning: the proclamation of the blessed Passover, in which the Lord was sacrificed. We feed as on the food of life, we constantly refresh our souls with his precious blood, as from a fountain. Yet we are always thirsting, burning to be satisfied. But he himself is present for those who thirst and in his goodness invites them to the feast day. Our Savior repeats his words: If anyone thirsts, let him come to me and drink.

He quenched the thirst not only of those who came to him then. Whenever anyone seeks him, he is freely admitted to the presence of the Savior. The grace of the feast is not restricted to one occasion. Its rays of glory never set. It is always at hand to enlighten the mind of those who desire it. Its power is always there for those whose minds have been enlightened and who meditate day and night on the holy Scriptures, like the one who is called blessed in the holy psalm: Blessed is the man who has not followed the counsel of the wicked, or stood where sinners stand, or sat in the seat of the scornful, but whose delight is in the law of the Lord, and who meditates on his law day and night.

Moreover, my friends, the God who first established this feast for us allows us to celebrate it each year. He who gave up his Son to death for our salvation, from the same motive gives us this feast, which is commemorated every year. This feast guides us through the trials that meet us in this world. God now gives us the joy of salvation that shines out from this feast, as he brings us together to form one assembly, uniting us all in spirit in every place, allowing us to pray together and to offer common thanksgiving, as is our duty on the feast. Such is the wonder of his love: He gathers to this feast those who are far apart, and brings together in unity of faith those who may be physically separated from each other.

I have ended these commentaries on the Triduum with links to music that move me to tears. For Easter, the first is the hymn that I think is sung in every church tonight or tomorrow: "Jesus Christ Is Risen Today," so simple and joyful. Here it is sung at St. John's Episcopal Church in Detroit.

The other music that is equal to the emotions of the day is Gustav Mahler's Resurrection Symphony. All of it is splendid, but at least do yourself the favor of listening to the final movement, in which the modulations are simply stunning. As a bonus, in this recording, you not only have Leonard Bernstein leading the London Symphony Orchestra and Edinburgh Festival Chorus, you get Janet Baker singing the mezzo part. Baker is to Mahler as mustard is to a hot dog: Once you have combined them, you cannot really have the one without the other. And with that, I wish you all a blessed Easter.