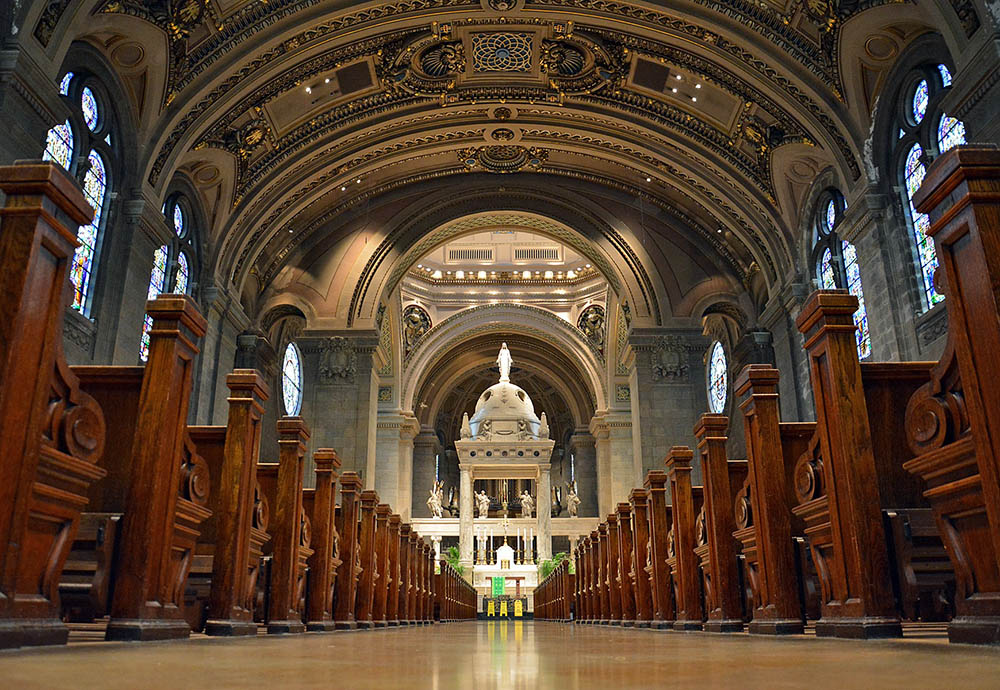 The interior of the Basilica of St. Mary, Minneapolis (Wikimedia Commons/Andreas Faessler)

"My parishioners were livid!"

"What are the bishops thinking? This is nuts."

"Don't they realize that Biden coming to Mass every Sunday is a good thing?"

"How can they be so opposed to Biden when the alternative is threatening democracy and trafficking in racism and xenophobia?"

Those were some of the reactions I heard, and questions I was asked, at this week's meeting of the Association of United States Catholic Priests. Over meals, in the elevator and in the Q-and-A after my talk, the topic was on everyone's mind.

The topic of my speech — "The Politico-Theological Merger That Is Shaping the U.S. Church" — had been chosen 18 months previously, but last year's meeting was canceled due to the pandemic. Our bishops made it even more timely with their own meeting last week.

More than a hundred priests gathered in Minneapolis for the meeting, which is held annually. It is clear that for many of them, especially for the older guys, the gathering is a vital shot in the arm, a chance to swap stories and strategies and, given the right-wing lurch of the bishops' conference, to commiserate.

Many of the priests wanted to know why the bishops' conference had abandoned the "seamless garment" approach to life issues that had been advocated by the late Cardinal Joseph Bernardin. No argument from me there. Had the conference spent the last 40 years articulating such a consistent ethic, they would have a moral authority they now lack, even if it is impossible to guess what political impact that moral authority would have.

Some of the priests had worked with civic leaders over the years and knew that it was never a good idea to become too aligned with one party. They told me about building relationships with politicians whose views were very different from their own, but understood that building relationships is advisable for any religious leader engaging civic leaders.

You never know when something is going to happen, I don't know, maybe something like a pandemic, in which religious and civic leaders will have to work hand-in-glove, and it is easier to do so if there is an already extant relationship upon which to build. Some wondered what it would be like to be a staffer at the bishops' conference who needed to contact the White House for help this week.

I wish I had had some reassuring words for my interlocutors. But the fact is that we are now going to spend five more months focusing on this crazy issue of denying Communion to pro-choice politicians.

The Communion controversy was not the only subject the priests discussed. This year, one of the highlights of the meeting was an interfaith service at the site of George Floyd's murder, led by the Rev. Jerry McAfee, a Baptist preacher. Attendees said the visit to the site was like visiting a shrine, the sense of the sacred overcoming evil pervaded the place that, from that horrific day when Floyd was murdered, has been changed by the prayers and solidarity of so many who have visited it.

Many conversations focused on how older clergy could help younger clergy, many of whom come out of seminary thinking that they have the answers to all the riddles of soteriology. I had touched on this theme briefly at the end of my talk, noting that conversations about their own vocation stories would likely yield some common notes of hope and human concern.

Many of these older priests are deeply read and know the tradition well, not some Disneyfied version of the tradition. If they find themselves in conversation with a young priest who seems more conservative, they should cite some of the many excellent teachings of St. Pope John Paul II and Pope Emeritus Benedict XVI, and then draw the connection to Pope Francis today. Hint: John Paul II was a complicated figure and was never the neocon his American acolytes painted him as.

One downside of the meeting? LifeSiteNews sent a "reporter" to confront some of the priests as they were trying to make their way to the dining area. In conjunction with the Lepanto Institute, they held some kind of a vigil outside as well.

I did not see them: When I left for a tour of the great Masqueray-designed churches of the area — the Basilica of St. Mary in Minneapolis, the Cathedral of St. Paul and the chapel at St. Thomas University — I went to the car by a different route. Like the Magi.

I had never attended one of these Association of U.S. Catholic Priests meetings, but it was a welcoming crowd, at least for someone from the National Catholic Reporter. These were unreconstructed liberals, mostly older clergy, who lack the shrill puritanism of so many young liberals these days. And they want to be pushed to think in new ways: When I offered some pretty strong critiques of different facets of contemporary liberalism, many in the room nodded approvingly. A speaker never knows in advance whether an audience wants you to be a cheerleader or to give them something to chew on, but I figured that they wouldn't have invited me if they wanted bromides.

Still, for my first post-COVID-19 in-person talk, it was nice to have such a friendly audience. Who doesn't like being told by others that they value your work? They stroked my vanity.

They also bracingly touched my humility. When giving a talk, it is necessary to scan the audience every few minutes, to make sure you are not losing them. But every time I scanned this audience, once I assured myself they were still very attentive, different thoughts entered my mind. How many dying souls had been comforted in their last hours by the men in this room? How many children had received their first Communion from these hands? How many grieving families had been comforted at a funeral presided over by one of these priests? How many sermons had stirred an individual to a moment of personal growth or conversion, or stirred an entire congregation?

The bright, loving, attentive priests have given their lives to the happy task of channeling God's grace and, what is more difficult, helping the rest of us notice the grace that is already present and at work. They have been the face of Christ in their compassion and in their solidarity.

They have done the work of the church we journalists just write about. Being accorded the microphone before such an audience was profoundly humbling. It was a great blessing for me.