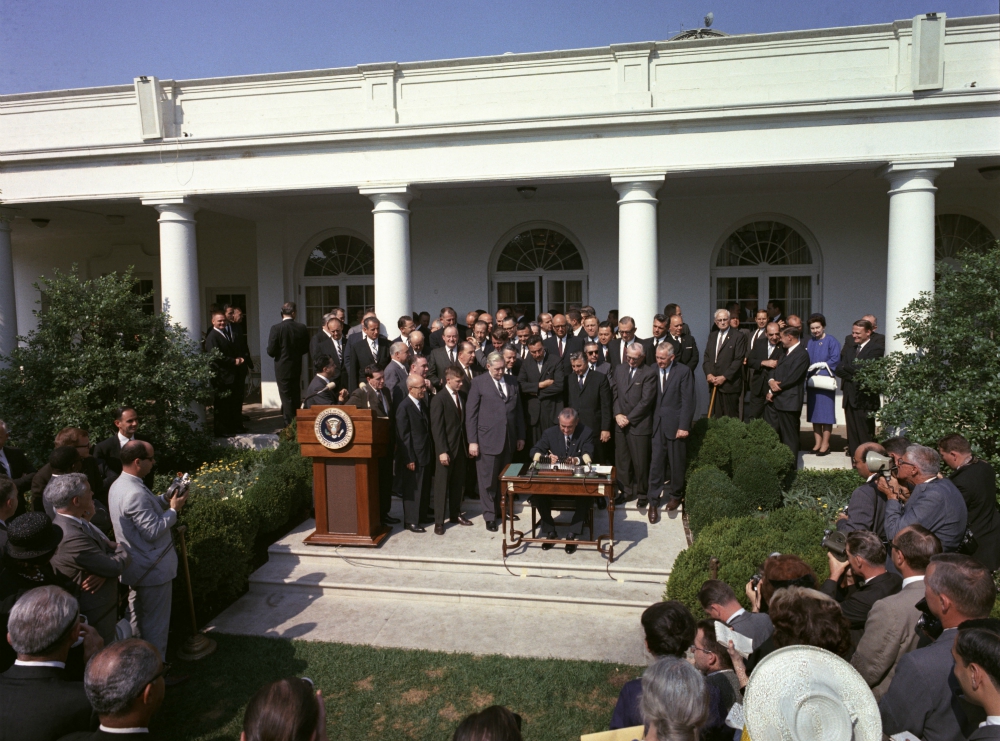 President Lyndon Johnson signs the Economic Opportunity Act, one of the War on Poverty initiatives, on Aug. 20, 1964. (Wikimedia Commons/U.S. Government)

Yesterday, in my links column, I called attention to a New York Times article about affirmative action. The article captured well the good intentions that animated the early programs, and also the many unexpected consequences. The article did not focus much on the political backlash.

This year, Democratic presidential candidates are proposing a variety of government initiatives, whether it's the Green New Deal or "Medicare for All" or reparations for slavery. The more honestly they can discuss the mixed history of social programs, how they succeeded and how they misfired, the more likely they are to get a hearing from the American people on these new proposals.

The Times article quotes Robert Kirkpatrick Jr., who was dean of admissions at Wesleyan University at the time affirmative action was first introduced. "I think it's a fair question to ask: Did we really understand or know what we were doing, or could we have predicted what the issues would be?" said Kirkpatrick. "The answer is no. I think we were instinctively trying to do the right thing."

Many of those instincts proved true and many not. The courts ruled that racial quotas violated the Constitution, and so the argument changed in a way that was felicitous, focusing on the value of diversity per se. As the Times article demonstrates, affirmative action opened doors to many black people whose range of opportunities were vastly increased because of the access to top-tier schools like Columbia University.

On the other hand, the backlash against the programs continues today. Talk to the parents of a bright white male applying to colleges, whose test scores are right on the margin: Every time they get a rejection, they have to wonder if they might have been accepted but for the affirmative action programs. I know many black friends who could easily have gotten into any college they wanted and who came to resent the assumption that they had only gained admission because of an affirmative action program.

On balance, it seems easier to me to make the case that affirmative action benefited our society as a whole than the reverse, even if the price of the program fell disproportionately on a group of white students who did not get to attend the colleges they most wanted to attend and a small group of black students who felt their achievement was marred by questions about how they got into college. And, as noted, in response to court challenges, we backed into a more rigorous defense of the value of diversity per se.

Another example of a government program that has been demonized by conservatives but that has achieved some important successes is the "War on Poverty" programs first introduced by President Lyndon Johnson in the mid-1960s. Like affirmative action, the War on Poverty had some unintended consequences that were negative, as well as successes.

In 1964, the official poverty rate was 19% of the population. In 2014, it stood at 14.8%, a drop of 4.2 percentage points. Additionally, anti-poverty programs have lifted almost 40 million Americans out of poverty and greatly ameliorated the effects of poverty through programs like food stamps and Medicaid. When conservatives from Ronald Reagan to Paul Ryan mocked LBJ's Great Society programs — "We had a war on poverty and poverty won" — they were not telling the truth.

There were unintended consequences from these programs, especially in the African American community. Just as happened with affirmative action, Great Society programs helped open avenues to financial success for millions of black families. They were able to leave the segregated ghettos where black people had been forced to live before, but they took much of the social capital of those communities with them.

The people left behind tended to sink more deeply into poverty and the social pathologies that attend it. It is a brutally sad fact that while the overall poverty rate declined, the poverty rate for children remains stubbornly high: 21.1% in 2014, down from 23% in 1964.

The Great Society programs were funded by tax dollars, so the costs were widely spread. But Reagan effectively campaigned against "welfare queens" a phrase that suggested not only that there was fraud in the system, but that the system was fraudulent, that recipients of welfare were living better than the working poor who paid taxes.

There was also a racial overtone because the original "welfare queen" was a black woman named Linda Taylor, who lived on Chicago's South Side and really did game the system. The Chicago Tribune, not Reagan, first awarded her the sobriquet that Reagan would use to stigmatize an entire race. As if all Italians should be stigmatized on account of Al Capone or all white youngsters for Dylann Roof. It is a measure of how deep-seated racism is that in Taylor's case, the demonization was relatively effective.

Ours is a dogmatic age, and so the political actors think they, too, must speak in absolutes, that admitting a venture was not a complete success or that one's proposals will not be a total solution to a particular problem will sound a note of indecision, of failure of commitment.

But months before Franklin Roosevelt pledged a new deal for the American people, he spoke of the need for "bold persistent experimentation" and that is what the New Deal was. It was not a complete success at ending the Depression. It was imperfect because of the political realities of the day. But it earned the votes of the American people precisely because it touched on a pragmatic streak in the American psyche and it restored the nation's confidence in the proposition that we humans are not at the whim of impersonal economic laws. Surely, Roosevelt's time was no less dogmatic than or own.

We can debate the particulars, but I hope the Democratic candidates will shed any dogmatism in their language and their logic. Let hope marry pragmatism as it did in Roosevelt's day, not because we wish to compromise, but because we are conscious of the need for honesty and humility about the outcomes of even our best efforts.