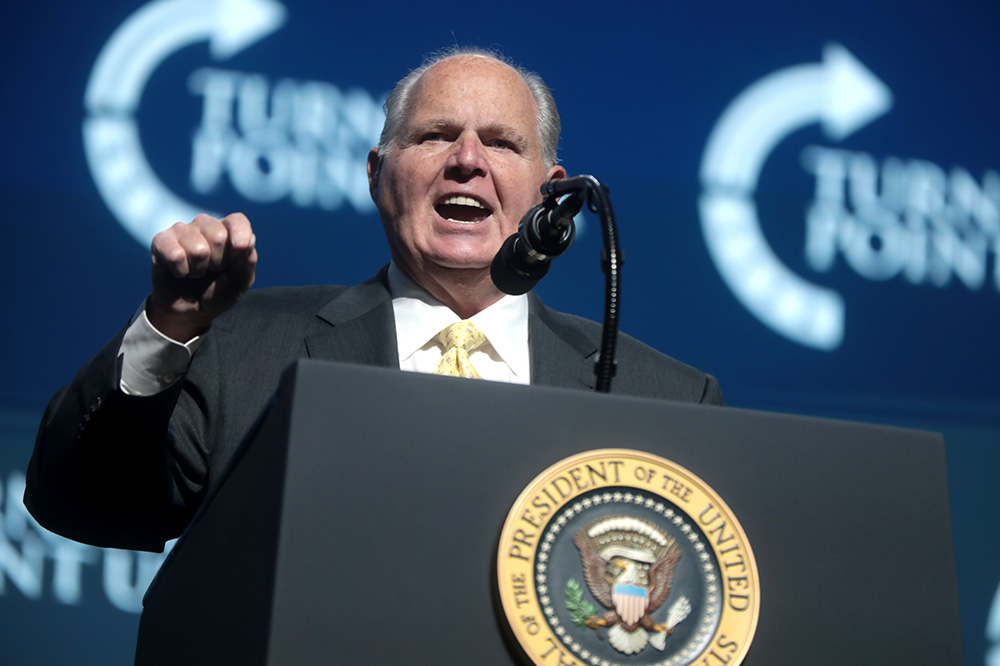 Last Wednesday night, all three primetime Fox News shows began their shows with tributes to Rush Limbaugh, who had died earlier in the day. And well they should. Limbaugh, more than anyone, coarsened American political discourse, paved the way for the rise of conservative populism, and fed the rawness of the culture wars, which are the nightly fare offered by Tucker Carlson, Sean Hannity and Laura Ingraham. EWTN host Raymond Arroyo made an appearance on Ingraham's show to praise the fallen icon.

Limbaugh oozed bile. He did not merely characterize his targets as misguided, or stupid, or even selfish. He rendered them for his audience as dehumanized targets of rage. He had special rage for feminist women, who were castrating harpies, and Black people, who were lazy, intellectually unqualified, and inherently criminal. The message he pounded home day after day was that minorities and women were seizing status and resources from white people and men, and that politics was a zero-sum struggle — and the victory would go to whichever side fought more viciously.

The content and the style vied with each other for vulgarity, none of it bounded by a concern for truth and almost always with a view toward stoking the basest of human emotions.

When Ingraham speculated, as she did on the afternoon of Jan. 6, that the mob attacking the Capitol had turned violent because it had been infiltrated by Antifa, she was walking down a path that Limbaugh had marked. When Arroyo traffics in anti-immigrant rhetoric, as he did last Thursday night, he is singing from the Limbaugh hymnal. When the entire EWTN and Fox networks explain away former President Donald Trump's serial misogyny, their script was perfected by Limbaugh.

One of the grimmest ironies of these conservative populists is that they advocate the very economic policies that sustain the economic insecurities without which their paranoid politics would collapse. I always wonder if they know they are duping their followers.

There is no denying that Limbaugh had a certain genius, but originality was not a part of that genius. He publicized conspiracy theories about the Clintons the way Oliver Stone publicized conspiracy theories about the assassination of JFK. He demeaned Blacks the way Fr. Charles Coughlin demeaned Jews. He advocated for states' rights the way George Wallace and John Calhoun had advocated for states' rights. Limbaugh liked to bemoan others as thugs, but he and his pedigree damn near cornered the market on thuggery.

No one need have cared about Limbaugh's influence if that influence had been confined to the media. But Limbaugh's style and ideas were consequential, as he shifted the Republican Party away from traditional conservatism toward movement conservatism. Chait's observation about politics becoming a zero-sum game is spot-on: Limbaugh brought back a paranoid and Manichaean element that has manifested itself in American politics through the years.

In previous times, however, it had faltered: Joseph McCarthy wreaked great harm on our society and our polity, but his reign of terror was short and his misdeeds were balanced by traditional Republicans who still believed that politics was the art of the possible.

Why was Limbaugh successful where Coughlin and McCarthy had failed? In part, because his rise in shock jock radio coincided largely with the rise of the religious right in politics. In this great free country of ours, people can believe and worship as they wish. But bringing millions of voters who think dinosaurs walked the earth a few thousand years ago (until they failed to get a ticket on Noah's Ark and were wiped out by the great flood) into the political mainstream introduced a capacity for credulity without which it is hard to imagine Trump getting away with his lies about building a border wall and making Mexico pay for it. Or Sen. Mitch McConnell's backflip on confirming Supreme Court justices in an election year. Or the Texas Republican lies about the loss of power in their state being the result of windmills freezing.

The Enlightenment has its limits and its excesses to be sure. Still, if you spend an hour on YouTube listening to what is being said in many white evangelical pulpits, you will find yourself thinking H.L. Mencken's reporting on "The Monkey Trial" was not blinded by his undoubted anti-religious bigotry. Maybe he nailed it. Listen for another hour to some of those sermons, and you find yourself harboring Voltairean thoughts: "Écrasez l'infâme!" (""Crush the infernal thing!")

Regrettably, the same can be said about far too many Catholic pulpits these days. Here's looking at you, Tyler, Texas?

Newt Gingrich, who led the Republican takeover of the House in 1994, acknowledged the party's debt to Limbaugh, naming him an honorary member of the caucus and inviting him to address the new GOP majority. As historian Heather Cox Richardson explained in one of her Letters from an American:

Limbaugh told them that, under House Speaker Newt Gingrich, the Republicans must "begin an emergency dismantling of the welfare system, which is shredding the social fabric," bankrupting the country, and "gutting the work ethic, educational performance, and moral discipline of the poor." Next, Congress should cut capital gains taxes, which would drive economic growth, create hundreds of thousands of jobs, and generate billions in federal revenue.

The conservative fascination with the "moral discipline of the poor" evidences their rank hypocrisy: Limbaugh had four wives and Gingrich is on his third, as is Trump. Rules for thee but not for me.

As for the capital gains tax cut, it did not actually create millions of jobs nor bring in new revenue; it furthered the income inequality that actually harmed the working-class men and women Limbaugh claimed to champion.

When Winston Churchill was asked to send a note to his predecessor, Stanley Baldwin, on the occasion of the latter's 80th birthday, the normally magnanimous Churchill declined, saying, "I wish Stanley Baldwin no ill, but it would have been much better had he never lived." I am not prepared to go that far about Limbaugh — nor any man or woman. That said, it is a close call.

Limbaugh developed and exploited all these themes and more. He was the indispensable man in the creation of conservative populism, and the country is very much the worse for it.