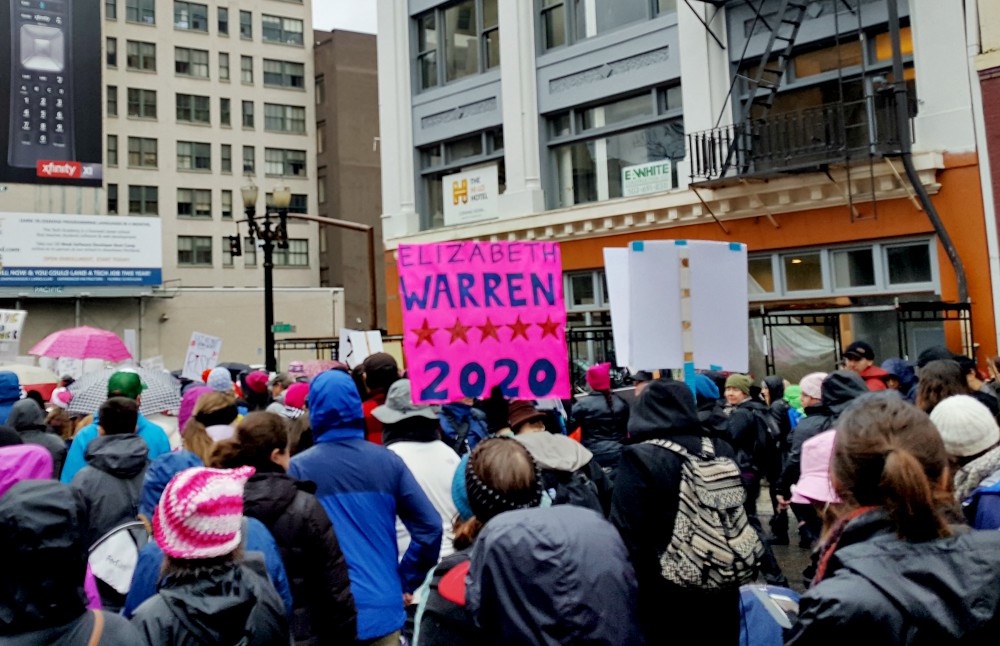 A sign supporting a 2020 presidential run for Massachusetts Sen. Elizabeth Warren is seen during the Women's March in Portland, Oregon, on Jan. 21, 2017. (Wikimedia Commons/Another Believer)

From the Milwaukee Journal-Sentinel, a local hospital run by Ascension told a man experiencing chest pains they had no room at the inn, I mean in the hospital, so they could not admit him. He later had a heart attack and died. I understand that mistakes happen, but who is responsible in this organization? The guy who makes $17 million? Anthony Tersigni needs to go.

Tersigni is not alone. A friend sent an old New York Post article about excessive compensation for executives at Fidelis Care. The bishop said, "You get what you pay for," but I want to know how, then, to explain the creation and flourishing of Catholic health care by religious women who worked for nothing all those years. Sadly, religious orders today seem to have drunk the corporate Kool-Aid and the bishops are not inclined to ask questions. Maybe it is time for Congress to start asking questions or at least one question: If these nonprofits are going to operate as if they were for-profit entities, why don't we tax them accordingly?

At RNS, a podcast featuring Bill Baker and yours truly. We recorded this interview in October at St. Catherine of Siena church in Greenwich, Connecticut where I was giving a talk later that morning.

The list of reasons why Donald Trump should scare us is long, but last week, he added something to that list that was truly shocking: He told the members of his Cabinet and the press pool that the Soviet Union had invaded Afghanistan to confront terrorists. The rest of his monologue was simplistic to the point of being deceptive, but this idea about terrorists is sheer propaganda. Who told him this was so? The Washington Post has the story.

Also at The Washington Post, Annie Linskey and David Weigel look at the special challenges facing women, like Massachusetts Sen. Elizabeth Warren, who are seeking the presidency, including one I mentioned last week: Before they get to run against Trump, they have to figure out how to run against Hillary Clinton. Likable enough? This is completely unfair and also entirely real.

Congresswoman Rashida Tlaib is apparently not worried about appearing "likable." She claimed Democrats were going to impeach Trump, and she used a cuss word to describe him. More on this tomorrow.

Here at NCR, we published a letter from Terence McKiernan, president of BishopAccountability.org. His letter made me yearn for the days when this organization studiously avoided anything like an editorial stance and stuck to the important task, one they have done so well, of collecting and publishing documents. Manifestos like this — "Pope Francis must," "we must" — need to be done carefully and intelligently, with arguments and evidence, and McKiernan's letter is irresponsible in its scattershot generalizations.

Paul Krugman, in The New York Times, explains why the Trump tax cuts are even worse than people make them out to be. It has not created a groundswell of money being repatriated. It did not pay for itself. It did not create enormous levels of new investment. Most Americans — 90 percent of us — will be made poorer by the tax cut. For Democrats, this should become the core of the message in 2020: Trump betrayed the working-class people he aimed to champion.

If you thought conservative Catholics were finally grasping the clergy sex abuse crisis, think again. At the National Catholic Register, Fr. Raymond de Souza writes, "When Archbishop [Charles] Scicluna submitted his report, Pope Francis announced that he had been 'badly informed' about what was going on in Chile. That was another, near fatal, blow to confidence in the capacity of the Holy Father to provide the necessary leadership." No. The pope's willingness to admit he made a mistake restores our confidence in his leadership. People unwilling to admit to making a mistake are the dangerous ones. And, at Catholic World Report, Amy Welborn thinks Francis' focus on credibility shows he is still thinking in institutional terms. Only if you have a really truncated, public-relations understanding of credibility. Reading the pope's letter to the U.S. bishops, it is obvious to me that the credibility he was speaking of is rooted in the Gospels, not in poll ratings.