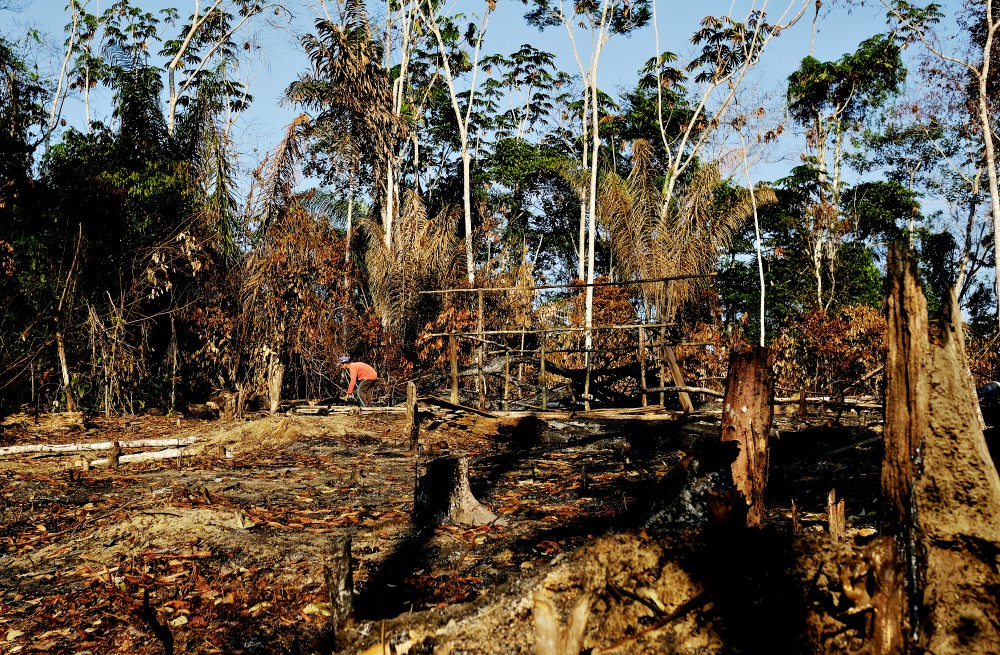 A wildcat gold miner builds his makeshift home at a deforested area of the Amazon rainforest near Crepurizao, Brazil, in 2017. (CNS/Reuters/Nacho Doce)

Yesterday, I complained about corruption, but this story in The New York Times about Donald Trump's dealings with Deutsche Bank not only highlights the layers of corruption in both the Trump organization and the bank, some of it was as petty as a promised trip to Mar-a-Lago. Most astounding is the sheer stupidity of the bankers. Trump was Lucy holding the football, and Deutsche Bank was Charlie Brown, never willing to abandon the hope that this time she would not yank the football at the last minute, or that Trump would pay back his loans.

Also in The New York Times, Robert Leonard and Matt Russell explain how Democrats can win in rural America but only if they take the time to learn something about the unique needs and issues rural voters face. Hint: Just because complaining about "big agriculture" wins applause at Dartmouth doesn't mean it makes sense to people in Des Moines. Resentment against Walmart and Amazon for pushing out small retailers is evident. I note, as well, that the authors call attention to the fact that rural voters tend to belong to faith communities.

Best, funniest and weirdest news story of the week? Rep. Devin "Snowflake" Nunes filed suit against Twitter and several Twitter users, including the satirical "Devin Nunes' cow." With a story like this, there is only one writer to whom we should turn, Dana Milbank at The Washington Post.

How not to defeat Trump? Agree to a debate hosted by the LGBTQ group Human Rights Campaign that will focus exclusively on issues related to that community. GOP strategists will watch as Democratic candidates ties themselves in knots discussing transgender athletes and then just put the video into a feedback loop. Furthermore, if 3-5 percent of the community can demand a debate dedicated to their issues, will NARAL insist on a debate? The AFL-CIO? The NAACP? Some of us are old enough to remember the '70s and '80s when Democrats forgot how to talk about just being an American because we were enthralled by hyphens and special interests. I am told that the Human Rights Campaign debate is about fundraising. If that is the case, then the Democrats deserve to lose.

I am still not a believer, but there has been enough buzz surrounding South Bend, Indiana, Mayor Pete Buttigieg's candidacy that Distinctly Catholic will start paying attention. This interview with Greg Sargent at The Washington Post shows the degree to which the mayor is thoughtful and serious, fluent in discussing the connection between policy and values.

Speaking of the connection between policy and values, who knew Sen. Elizabeth Warren could preach so powerfully? Appearing in a CNN town hall Monday night, Warren was asked about her faith and while she cited the wrong verse — it is Matthew 25, not 26 — but she distilled the essence and shared it with the audience in a manner worthy of a real preacher.

In the Las Vegas Review-Journal, a physician makes the case against physician-assisted suicide. In addition to the ethical quandary it places doctors in, he notes what will be the socioeconomic inequalities of treatments: Poor folk will be denied more expensive care, even if it could prove successful, and encouraged to take their lives. You can see that a mile away. Compassionate choices? Not so much.

Many times have I warned people in the pro-life movement that their focus on overturning Roe v. Wade was misplaced, that kicking the issue back to the states would empower pro-choice activists, and that the vast majority of states would enact laws that either codify Roe or worse. Writing at Politico, pro-choice activist Robin Marty agrees with me, arguing that overturning Roe could be the best thing to happen to the pro-choice movement. Careful what you wish for, people.

Whatever you think of Trump, he may be less dangerous to the planet than his fellow right-wing nationalist from Brazil, President Jair Bolsonaro, who has already removed protections from the Amazon forests, which are the "lungs of the planet," absorbing enormous amounts of carbon dioxide and emitting enormous amounts of oxygen. This is one scary scenario, and involves the elimination of indigenous cultures, too, and Carol Giacomo at the Times explains it well.