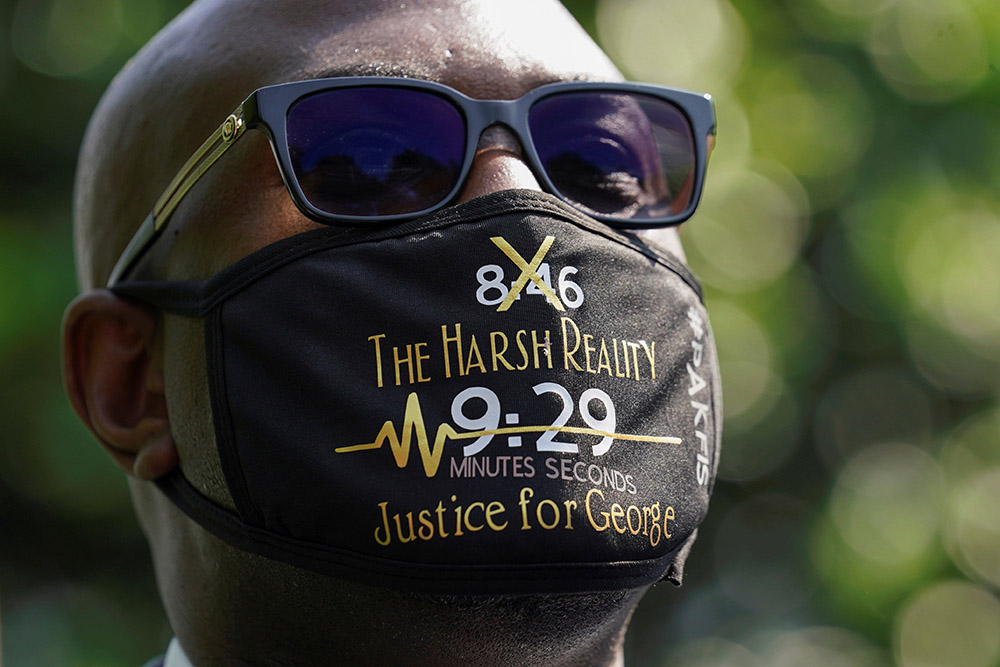 Philonise Floyd wears a face mask referencing his brother George's killing as he and other family members speak with reporters at the White House following their meeting with President Joe Biden in Washington May 25. (CNS/Reuters/Kevin Lamarque)

President Joe Biden welcomed the family of George Floyd to the White House on the one- year anniversary of his murder, and it was very moving. The family and the president both urged Congress to enact bipartisan police reforms. The president behaved with dignity. For four years, such moments were impossible to imagine, and it is good that they are back. Whatever else a president must do, calling forth the better angels of our nature is at the top of the list. It was no surprise the Floyd family acted with dignity both at the White House and later at the Capitol: They have acted with dignity throughout this year of reckoning, and they, unlike the politicians they engaged yesterday, never asked to be placed in this position. I doubt very much many of us could have done the same.

At Politico, Republican Rep. Adam Kinzinger has called for U.S. Rep. Marjorie Taylor Greene to be kicked out of the GOP caucus because she compared requirements to wear masks with Jews being forced to wear a yellow Star of David during the Holocaust. Her comparison is offensive, to be sure, but that is not why she should be kicked out of the conference. It is because her comparison displays acute paranoia of a kind that beclouds judgment. Kinzinger, alas, appears to be one of a dying breed: a Republican officeholder with a conscience.

Relatedly, in The New York Times, Paul Krugman on "The Banality of Democratic Collapse." It is a bracing read, and I shall have more to say on the topic Monday in my Memorial Day commentary.

At Working-Class Perspectives blog, Marc Dann and Leo Jennings have penned a "Working-Class Bill of Rights." I do not agree with every item on their list, and the anachronistic throat-clearing about the founding fathers at the beginning is unfortunate. Still, they make the point that in the economic sphere, the disadvantages faced by the many and the rewards stolen by the few are both so enormous that something like a bill of rights might establish a new, higher floor for all citizens.

Relatedly, from the Catholic Labor Network, good news about Washington state farmworkers who have secured the right to overtime pay. The initiative was backed by both labor and faith groups and makes Washington the second state, after California, to pass such a law. The rest of us have had the right to overtime since 1938. It is about time farmworkers have it nationwide as well.

After forcing a plane to land so that authorities could arrest Belarusian dissident journalist Roman Protasevich, the Belarus government released video of his "confession." It was painful to watch. He had obviously been tortured and, yet, the Belarus government thought it was a good idea to show the video anyway. It showed the degree to which Stalinism is alive and well in the regime of Alexander Lukashenko. The video was not intended to show Westerners that Protasevich was really guilty. It was intended to show other dissidents in Belarus what awaits them if they cross the leader.

Relatedly, at The New York Times, Andrew Higgins and Andrew Kramer profile Protasevich. I hope that his poor country is filled with others like him.

If there is a more serious and evenhanded journalist than Lesley Stahl, I do not know her. Stahl did a segment on last Sunday's "60 Minutes" about young people who received what they consider inadequate health care when they decided to transition from one gender to another. Stahl is being attacked because — well, it is hard to tell, but apparently because she talked to people who have decided to detransition and that somehow reinforces a conservative talking point. Maybe it does, and maybe it doesn't, but a journalist should never refuse to tell a story because it might upset someone's narrative, including their own. I would add on a personal note that I think anyone who considers Stahl a lousy reporter is dabbling in Trumpism.