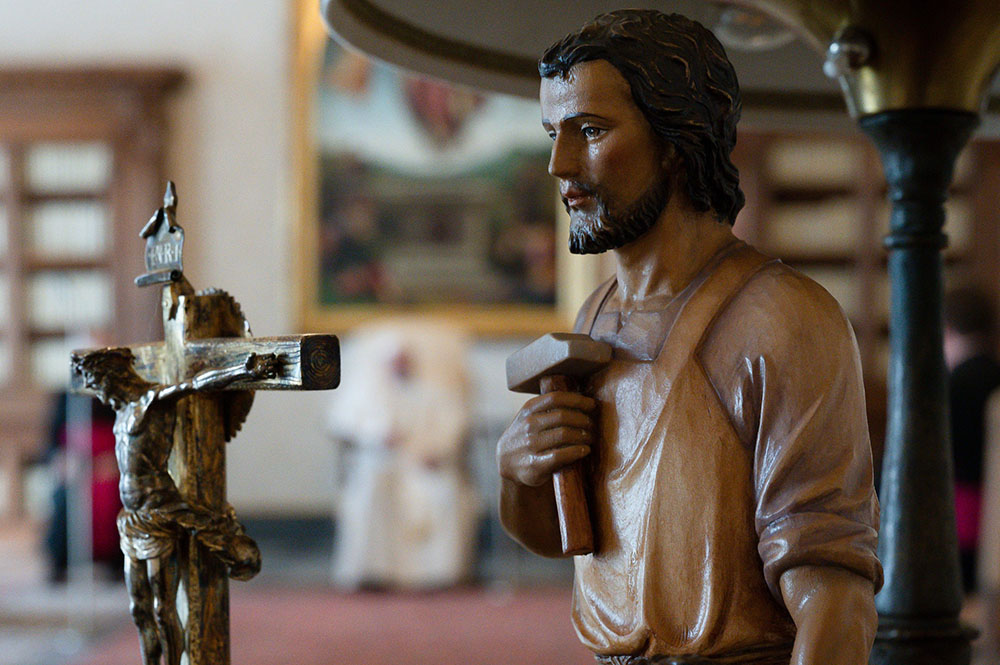 A statue of St. Joseph is seen as Pope Francis leads his general audience in the library of the Apostolic Palace at the Vatican March 24. (CNS/Vatican Media)

From The Boston Globe, new research from Equis, the Democratic polling outfit that focuses on Latino voters, indicates that it was Latina women, not Latino men, who made the most pronounced shift to Donald Trump in the 2020 election. Explaining why this happened remains complicated but whatever we all thought we knew about voting behaviors of certain groups was bunk.

From NPR, Army Lt. Caron Nazario is suing the police officers who pulled him over, refused to explain why they did so, gave him contradictory threatening orders, pepper-sprayed him and handcuffed him. The police officers in question deserve to lose everything they have and I hope there will be criminal charges also. Police violence against Black men, in this case an Army officer in uniform, has got to stop, and it will only stop when the perpetrators are made to pay.

In The New York Times, Kurt Streeter looks at the potential for the upcoming Tokyo Olympics to become a super-spreader event, and the conundrum over boycotting the 2022 Winter Olympics in Beijing. He also looks at the exorbitant costs and the damage done to the poor and the environment in host cities. I was glad to see him float the idea I have been discussing for a decade: Award the games to one city permanently. Odd he did not mention the obvious candidate for the summer games: Athens. Still, the Olympics have been in trouble for some time, and they need to be reformed or scrapped.

Also at the Times, the always incisively funny Michelle Cottle looks at the different dictionaries used by our nation's two political parties and how basic words like "bipartisanship" and "infrastructure" and "cancel" have come to mean wildly different things.

I remain suspicious of polling after pollsters got the 2020 election so wrong, knowing all eyes would be on them because of the mistakes in 2016. But the pollsters at the University of Texas may be the exception to prove the rule and they have new data on voting rights, abortion and guns. I especially call attention to their findings on abortion. Fifty-four percent of Republicans favor making abortion laws stricter but only 21% favor banning the procedure in all cases, When the U.S. Supreme Court overturns Roe v. Wade and its progeny, anti-abortion groups will need to put their cards on the table about what they want the law to look like.

From the "Go, Rebuild My House" blog sponsored by Sacred Heart University, feminist theologian Tina Beattie writes about the vitriol that came her way when she reviewed a book about transgender issues and was insufficiently woke for her critics. She writes:

An ideology is a set of beliefs by which one seeks to bring about change in society, and as such it is a neutral term. However, benign ideologies seek change through understanding, not through diktat. They are open to different views and refined through debate and reflection. Destructive ideologies are those that impose their views on others and seek to silence or eliminate all dissent.

There is surely room for a variety of opinions on these issues, but the chilling atmosphere that seeks to silence those who do not toe the line is something all liberals should abhor.

On a lighter note, from NPR, Scott Simon reports on a letter signed by animal lovers, including Jane Goodall, that seeks to have AP Style change its nongendered pronouns for animals. The letter correctly notes that most people with pets refer to their pets with gendered pronouns. Maybe I will get a petition going to allow the word "church" to be capitalized as "Church" when referring to the one, holy, catholic and apostolic faith.

From Politico, every politician's dream is to draw an opponent who dishes up a story like this: A MAGA-backed pastor, Phil Rizzo, who lives in a $1.55 million house is challenging Gov. Phil Murphy. Best of all, the pastor does not pay taxes on his house because it is listed as a rectory.

From The Washington Post, a remembrance of the "Arab Spring," a series of protests against dictatorships. Hopeful in the beginning, "it all went horribly wrong." Only Tunisia took steps toward democracy that have been sustained. Egypt has returned to military dictatorship. Yemen and Libya devolved into violent chaos. Syria has been hell. It is too grim and too sad.

From Mundelein Seminary, the rector, Fr. John Kartje, delivers reflections on St. Joseph as a model of affective maturity. His talk is part of a series of reflections to begin the Year of the Family to which the pope has called the universal church. Of course, columnists need a different temperament than a future priest, so readers should not look for me to become calm like St. Joseph anytime soon!