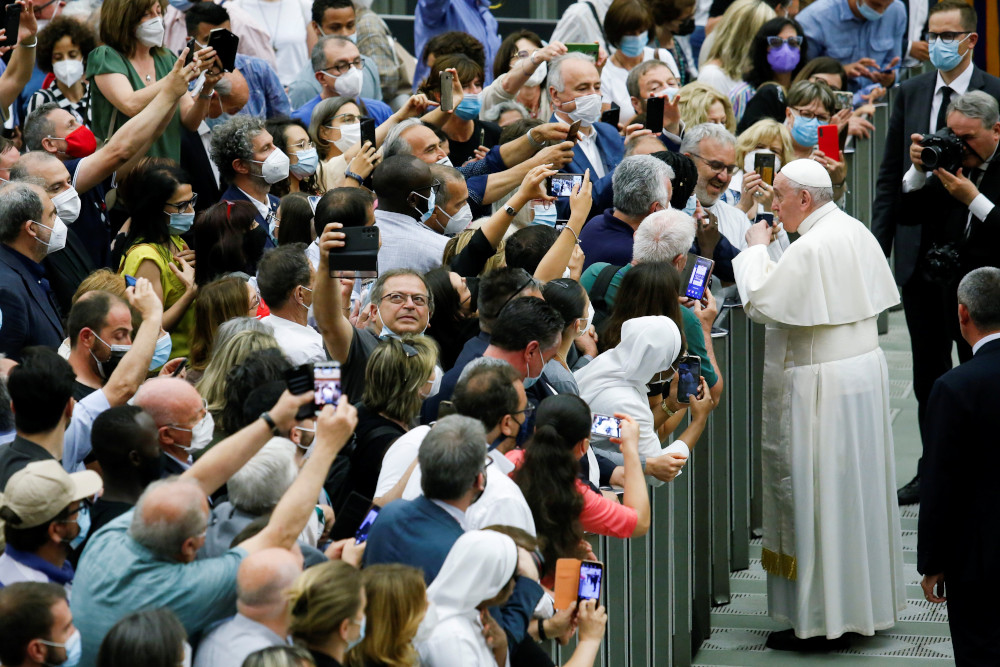 Pope Francis greets people during an event marking the 50th anniversary of the founding of Caritas Italy, at the Vatican June 26. (CNS/Reuters/Remo Casilli)

Happy Feast of Sts. Peter and Paul — and a happy 77th birthday to Boston Cardinal Sean O'Malley! Here is a recording of Palestrina's "Tu es Petrus" sung by the Sistine Chapel choir at the conclusion of Pope Francis' Mass with the cardinal electors the day after his election as pope. Such beautiful music and such a happy memory!

Relatedly, how is the current successor of St. Peter polling? The latest Pew Research Center numbers show that 82% of U.S. Catholics have a favorable impression of the pope. (I would bet good money it is lower among bishops?) Only 73% of Republican Catholics report having a favorable opinion of the Argentine-born pontiff, compared to 90% of Catholic Democrats. I was frankly surprised his number among Republicans was that high.

From the Times Union, Bishop Edward Scharfenberger of Albany, New York, says that he would not approve a document that barred Communion from pro-choice politicians. Given the demands from the zealots that any document do precisely that, it will be interesting to see how the drafting committee navigates this Scylla and Charybdis.

Poor Garry Wills. Writing at The New York Times, he argues correctly that the bishops are wrong about denying Communion to politicians but also argues, incorrectly, that they are wrong about abortion. The poverty of his argument is astounding but it comes down to this: Scripture does not mention abortion, so why should we? Scripture also does not mention manmade-climate change or nuclear weapons or a host of other evils that we are called to confront. He raises the canard that because half of all fertilized eggs fail to adhere to the uterine wall, "nature and nature's God [are] guilty of a greater 'holocaust' of unborn babies than abortion accounts for," comparing a natural act to an intentional one, a failing to note the difference for moral analysis. It is ridiculous arguments like these that make the Communion-denial brigade seem sane by comparison.

At Politico, Ben White looks at the economic data and the many, divergent interpretations of what that data mean. Are we in a full-blown recovery or is inflation the dominant reality? Getting the economy right is more important than all the culture war fights that tend to dominate the news cycle.

At Harvard Law Today, a discussion about "Free Speech, Media, Truth and Lies," hosted by the National Constitution Center. The discussion begins with Harvard University professor Martha Minow arguing for a return of the Fairness Doctrine. Joining her in the conversation is Jonathan Rauch, of Brookings Institution, and Paul Matzko of Cato Institute. Fascinating, scary, hopeful, the conversation deals with the issues upon which our democracy will be broken or find new ways to thrive.

At The Hill, Ruth Santiago and Michael Gerrard urge the Biden administration to reject a proposal from the Puerto Rican Electric Power Authority (PREPA) to spend federal money rebuilding the old fossil fuel infrastructure that failed during Hurricane Maria and that causes disproportionate pollution for poor communities in the southeast section of the island. The Biden administration should listen: Solar panels that can be taken inside during a hurricane and, when it passes, quickly reestablished, would obviate the need for electric transmission lines to cross the island's mountainous core. If ever there was a place where solar and wind power is abundant, Puerto Rico is that place.

More often than not, an attempt to find a metaphor or a meme for politics in the non-political culture will fall short, failing the standard by which all metaphors are judged: Does it enlighten more than it adumbrates? But Derek Robertson's essay at Politico "How Republicans Became the 'Barstool' Party" is a winner. He begins with a focus on Dave Portnoy, founder of "the self-consciously lowbrow Barstool Sports digital media empire," who has "parlayed an outsized, aggressively macho social-media presence into a status as a right-leaning populist champion." Doesn't that sound like an apt description of Donald Trump and his most noxious acolytes?