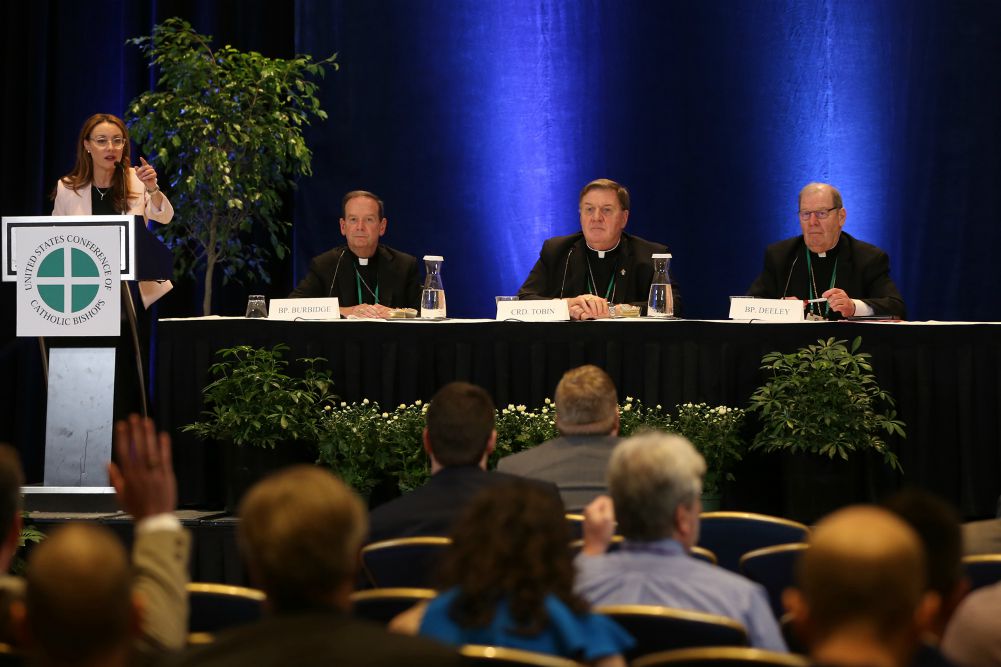 The fractures that define the life of the Catholic Church in the United States at this time were on full display in the ballroom of the Marriott hotel where the U.S. bishops just met. But not among the bishops, who rallied around proposals to implement Pope Francis' motu proprio letter Vos Estis Lux Mundi, ("You are the light of the world") dealing with sex abuse. No, the division can be seen among the media outlets covering the event.

At the National Catholic Register, Ed Condon argued that the bishops spoke some fine words but failed to adequately denounce Bishop Michael Bransfield and other bishops who have strayed, more "fraternal correction" than the corporate silence that accompanies these meetings. "There are many good bishops in Baltimore who recognize nothing of themselves or their ministry in the actions of Bransfield and [former Cardinal Theodore] McCarrick, and those who kept them in place for so long," Condon writes. "But if they do not rise to say so out loud, will the faithful know they are there?"

Condon is on to something: If the bishops do not differentiate themselves from bishops who have committed crimes, should they be surprised if the people in the pews think they are all a bunch of crooks? But there were two words missing from his column: Robert Finn. The former bishop of Kansas City-St. Joseph, the only bishop in the U.S. criminally convicted for his failure to protect children, was in attendance throughout the meeting in Baltimore. McCarrick has been defrocked and Bransfield may end up in jail, but why ignore Finn who was sitting right there? And what about Pope John Paul II who promoted McCarrick four times? I do not fault the late Polish pope for appointing Bransfield: By late 2004, the pope was very ill. But men John Paul trusted and to whom he gave enormous authority are responsible for that appointment, no? Will we ever see a criticism of John Paul II in the Register?

Further to the right than the Register, LifeSiteNews' Doug Mainwaring highlighted an intervention by Bishop Joseph Strickland of Tyler, Texas. Strickland, first out of the gate in promoting the "testimony" of disgraced former nuncio Archbishop Carlo Maria Viganò, urged his brother bishops to crack down on "errant" Catholic politicians who do not toe the party line. He was good enough to mention immigration alongside abortion, but he still seems not to understand that the bishops' credibility is rather low on any issue, and it has been a long time since people looked to them for advice on how to vote.

Still it is interesting that Mainwaring chastises Archbishop Jose Gomez and the rest of the body of bishops for their response to Strickland: "Gomez completely ignored Strickland's main point about challenging Catholic politicians whose public lives stand against the sanctity of life, and Strickland returned to his seat," he writes. "None of his brother bishops rose to support him, or to second his concern." Most of his "brother bishops" wonder aloud how it is that Strickland was ever appointed!

The conference, as predicted, passed the implementing documents. Some of the language was made more robust, but those who wanted some kind of lay oversight of the bishops were, as predicted, disappointed that no such oversight was included. As a practical matter, every metropolitan archbishop in the country will have a mostly lay board looking into any allegations they receive under the terms of Vos Estis. But Lumen Gentium survived the calls for lay oversight and none of us have to worry about waking up as Congregationalists tomorrow.

Perhaps at the next meeting, the bishops can consider how they can overcome the polarization within the flock that is fed by the media as well as by other sources. The Donatists on both left and right need to be reminded that Donatism was ruled a heresy. More importantly, the bishops need to consider how they might genuinely remake the hierarchic culture so that the church can, as Francis has called for, be an instrument of evangelization rather than a millstone of worldly corruption.