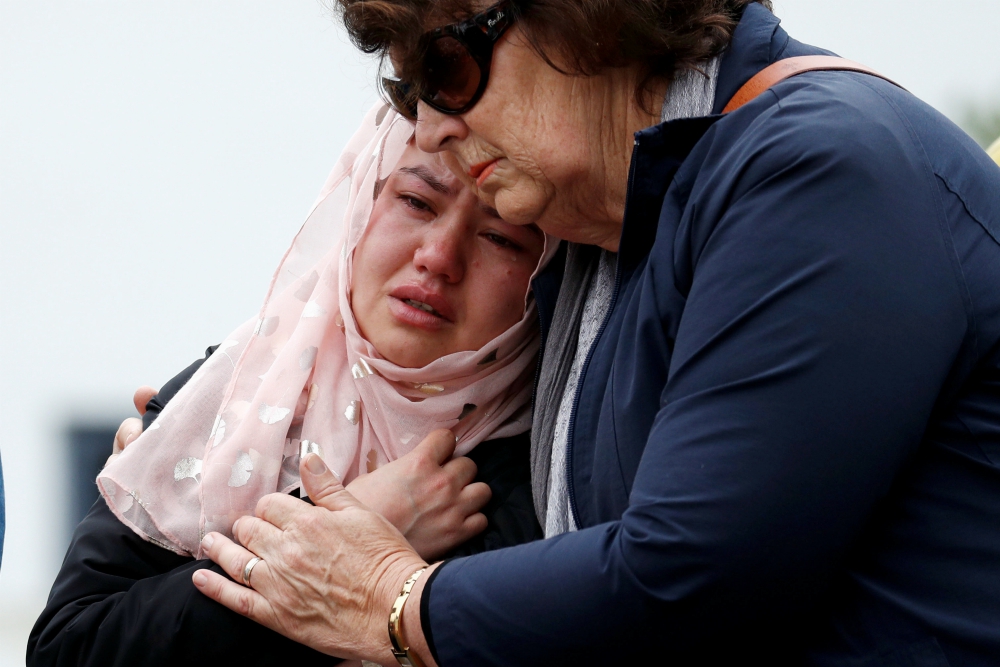 People embrace as they pay respects outside Al Noor Mosque in Christchurch, New Zealand, March 18. Prayer services were held across the country and abroad after March 15 mosque attacks in Christchurch that left at least 50 people dead and 20 seriously injured. (CNS/Reuters/Jorge Silva)

A friend posted a note on his Facebook page the other day: "This has been a really bad few days in the world. We seem caught between the violence and hatred of the New Zealand terrorist and the greed and corruption of the college admissions system." As far as the news cycle went, yes, it felt like we were caught, but are we caught in terms of politics?

The murders in two mosques in Christchurch, New Zealand, were horrifying but not baffling. The perpetrator issued a manifesto explaining himself. That manifesto was filled with conspiracy theories and nonsense of the kind we have come to expect from white nationalists: The Jews are always the ultimate source of threat to the Aryans and the Muslims are somehow their dupes and immigration is their method. But the manifesto was not the work of a crazy person so much as it was the work of a person swept up in great evil.

Americans have largely assumed we were immune to nationalism because the very diversity of the country's population made it an improbable vehicle for political success. Yes, white Anglo-Saxon Protestants were a kind of "ruling class" for many years, but by the Second World War, that is, in our lifetimes, the country had become a hodgepodge, although divisions along racial lines persisted even while ethnic differences blended in the suburbs. And, unlike other realms that had once combined various nationalities, such as in the Habsburg Empire, in a democracy, the blending was more successful and thorough.

The only way for nationalism to gain currency, then, was to link it to religion or race. British nationalism, forged in the 18th century, wedded itself to Protestantism: In "Rule Brittania," when the chorus sings, "Britons never, never will be slaves," the slavery sworn off was not a fear that Britons would wake up black and working on a plantation. The fear was that they would be papist and subject to an absolute monarch as in Catholic France.

The first iteration of nationalism in the future United States was steeped in this rejection of Catholicism, and anti-Catholicism remained a kind of recessive gene in American culture, found in the hateful ideology of the Ku Klux Klan, for example, but also in highbrow pulpits like Marble Collegiate Church into the last half of the 20th century.

The resurgent nationalism of our time has linked itself to race and until Donald Trump started winning primaries in 2016, no one really thought it would be possible to mainstream this odious ideology. We must stipulate that the ideology, to say nothing of the actions, of the killer in Christchurch is far, far more extreme than the ideology of the president, but they are in the same family, and they resist the same liberal democratic norms that have traditionally served to ameliorate racial hatreds, not stoke them.

The killer took his guns into a mosque and killed more than four dozen people, and Trump condemned the slaughter. Yet, despite the protestations from the White House, the rest of us noticed that just last week, in an interview with Breitbart, the president warned darkly that the military, the police and "the bikers," that is, the people with guns, supported him and things would get ugly if these armed groups had to take on Trump's political opposition.

Never in my wildest dreams did I ever think I would hear such a threat from a president. It is shocking, absolutely shocking, that Republican members of Congress did not immediately distance themselves from this thuggish language and demand the president retract it. The fact that they did not confirms that white nationalist thuggery is now thoroughly mainstreamed. It is the responsibility of decent people to reject it with all of our might.

The college admission scandal showed a different ugliness in humankind, the pervasive corruption and greed that dozens of affluent Americans thought was acceptable, the recognition that many thousands more parents undertake similar efforts to advance their kids' prospects by legal means, and the irresistible conclusion that the rich in America do not think the rules apply to them.

One of the things about this scandal that people had a hard time getting their head around was the fact that these kids were from fabulously wealthy families. They did not need a diploma to guarantee financial security. Why then commit fraud to get them into an elite school?

The Vox article, by Anna North, goes on to dissect various misconceptions about merit and money in our society and how both converge to confer status, issues discussed brilliantly last year by Matthew Stewart in The Atlantic.

Unlike white nationalism, the cultural and political left is as prone to corruption and greed as the right. I recall discussing the Lewinsky scandal in 1998 with friends who wondered why President Bill Clinton was not paying a higher price. I remember saying, "I think we all knew the president had sex with women other than his wife when we elected him. They are throwing new mud at him, but it is just blending in." Then I added, "Now, if they found evidence of venality or something new, something we did not previously know about him, that would cause us to reassess."

I spoke too soon. The Clintons used the post-presidency to make millions. The Obamas are doing the same. The Bushes came from money, but that did not prevent George W. from hitting the lecture circuit, where he has made more than $20 million in speaking fees.

Harry S. Truman, bless his heart, left the White House, moved back to Independence, Missouri, and refused to take money for speeches. Is there a way to codify his example?

Both the left and the right turn to celebrities to bring the spotlight to a particular cause. I adore Meryl Streep as an actress. Her performances as Margaret Thatcher and Julia Child were extraordinary, although my all-time favorite is her portrayal of the driven fashion editor Miranda Priestly in "The Devil Wears Prada." But I do not give one whit what she thinks about abortion or the environment. I am glad Angelina Jolie cares about various worthy causes, but she is an actress, not an expert. The list could go on.

Greasing sociocultural and political wheels with cash or sex or other things of value is nothing new. In the mid-17th century, Arabella Churchill caught the eye of the future James II, and bore him four illegitimate children, long before her brother John came to the Duke's notice and preferment. Ulysses Grant was as corrupt a president as any president we have had, yet he remained a national hero. Jack Kennedy basked in the friendship of the Rat Pack and the more-than-friendship of Marilyn Monroe.

I am not advocating for Puritanism. But only in our own time do we pretend that the kids of rich people who get into Harvard — thank you, Jared Kushner — got there because of their merit. Indeed, wealth itself used to be seen as an accident of birth, not a sign of merit, and that prior moral calculus was far more accurate and ennobling.

So here we are, beset by the violence and racism of white nationalism and the corruption and greed of America's rich and uber-rich class. We look for an alternative and, frankly, only one name leaps to mind: Pope Francis. He is the most radical figure of our times, the most determinedly countercultural. He cares not a whit for status and he wishes the church he leads were a poor church. He preaches against violence and calls for dialogue as the antidote to violence on an almost weekly basis.

He doesn't fulfill the wish list of liberal Western Catholics and he drives conservative Western Catholics bonkers. But, after a week like this one, I am so comforted to belong to a church that has someone like him as its leader. As another friend wrote me this week, "We need more Pope Francis and less Donald Trump." Amen.