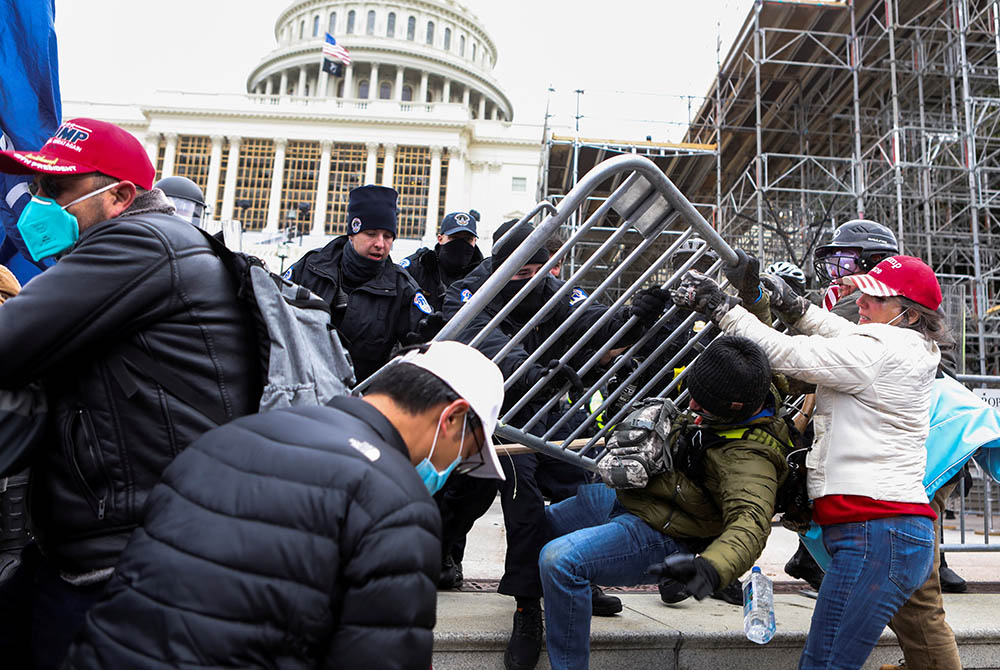 Law enforcement officers push back against supporters of President Donald Trump attempting to enter the U.S. Capitol in Washington Jan. 6, 2020, during a protest against the certification of the 2020 presidential election. (CNS/Jim Urquhart, Reuters)

The fact that a mob of Trump supporters, deluded into thinking they could affect a coup d'etat, stormed the U.S. Capitol and arrested the counting of Electoral College votes occasions a variety of emotions but no one — repeat, no one — has a right to be surprised. The president has been inciting violence in one way or another for weeks.

Today is two months to the day since the election was called for Joe Biden. For every day since, the president has repeated a series of nonsensical allegations about the election being stolen, about nonexistent voter fraud and about corrupt election officials. His bootlicking sycophants in the Amen corner of the Republican Party, Fox News and EWTN, have repeated the allegations day in and day out. The members of MAGAland were listening.

All of this came to a head at a rally on the Ellipse, just south of the White House, held just before the Congress began the usually pro forma task of counting the Electoral College votes, where the president repeated the false claim that the election was stolen. Trump claimed he had won "in a landslide." He put the vice president on notice, that he expected him to do the president's bidding. "I hope Mike is going to do the right thing, I hope so. I hope so. Because if Mike Pence does the right thing, we win the election," Mr. Trump falsely said. "He has the absolute right to do it. We're supposed to protect our country, support our country, support our Constitution, and protect our Constitution."

The president repeated a litany of specific allegations about ballots being destroyed and dead people voting and the voting machines being rigged. "We will never concede," the sorest sore loser on the planet proclaimed to his adoring fans, some of whom were waving Confederate battle flags. Who would think such people would have a hard time admitting defeat?

Related: 'You reap what you sow': Some bishops decry violence at Capitol

If half of what the president alleged was true, those who stormed the Capitol were right to do so. If there really was such widespread election fraud, they were justified in attempting to stop the certification of a stolen election. In a democracy, nothing, nothing is more treasonous than undermining an election.

Inside the Capitol, the members of Congress assembled in the House chamber to begin counting the Electoral College votes. U.S. Rep. Paul Gosar, who represents Arizona's 4th Congressional District, rose to challenge his own state's certification. That is to say, without even blushing, Gosar asked that his state's voters be disenfranchised. Sen. Ted Cruz of Texas affirmed that he had signed Gosar's complaint, requiring the Senate to return to its chamber, and both houses began debating whether or not to accept the certified result from Arizona.

Sen. Mitch McConnell, still the Senate majority leader, was the first to speak. He distanced himself from the president's allegations and the antics of his fellow Republicans. "We cannot simply declare ourselves a national board of elections on steroids," McConnell said. "The voters, the courts, and the states have all spoken. They've all spoken. If we overrule them, it would damage our republic forever. This election actually was not unusually close."

It was a fine speech. It was also too little, too late. The man who refused to permit a hearing on Judge Merrick Garland's nomination to the Supreme Court did not object when crackpot Sen. Ron Johnson held a hearing last month on election fraud. That event trafficked in allegations that had already been dismissed by the courts for lack of evidence, but it certainly served as kindling for what transpired yesterday. As if more fuel was needed, Sen. Cruz repeated the president's false charges, dressed up in constitutional finery and political BS. Shortly after he spoke, the chamber had to be cleared because the mob had broken through the police perimeter and was storming the building. 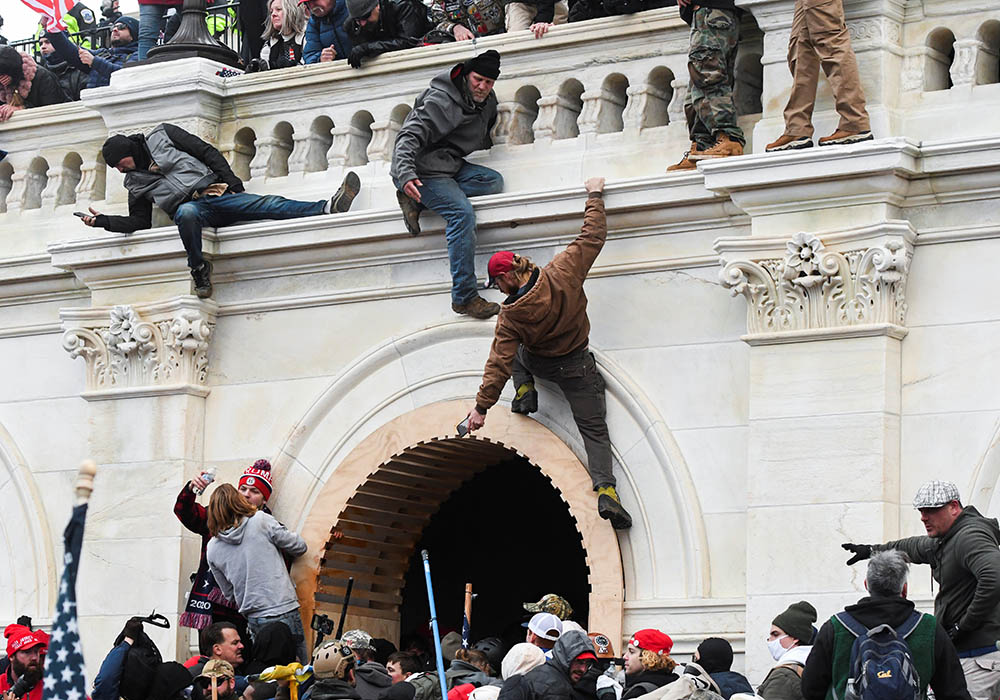 Supporters of President Donald Trump climb on walls at the U.S. Capitol in Washington Jan. 6, 2021, during a protest against Congress certifying the 2020 presidential election. (CNS/Stephanie Keith, Reuters)

Of course, EWTN star Raymond Arroyo, who has repeated the canards about election fraud for months, captured the historic significance of the day. "This all has a Les Miserables air about it," Arroyo tweeted, before retweeting a photo of the insurrectionists posing for photos at the dais of the Senate chamber and asking "Who are these people?" Later he tweeted that the violence was disgraceful before retweeting a video from the president that, according to Twitter, "can't be replied to, retweeted, or liked due to a risk of violence."

Bishop Steven Raica of Birmingham, Alabama, needs to have a "come to Jesus" talk with EWTN CEO Michael Warsaw, the gist of which is: Fire Arroyo or I will place your organization under interdict.

Laura Ingraham was on Fox News midafternoon explaining that she had heard from some MAGA protesters who had come all the way from Portland, Oregon, to "support the president." She reported that they were "very upset they were being lumped in" with those who stormed the Capitol. In the first place, this protest was not about any effort to "support the president." This was about overturning the results of the election. And, why would they be upset to be lumped in with the other people who came to join this effort, those who happened to be in a position to climb over the barricades?

Yesterday, while MAGA protesters were putting the "banana" back into "banana republic," the good people of Georgia were demonstrating that democracy is still a resilient thing, that the way to bring about change is to go out to the polls. Sen.-elect Raphael Warnock was declared the winner in his race in the early hours of the morning, and Sen.-elect Jon Ossoff was declared the victor in his contest in the afternoon. With the double wins, the Democrats take control of the upper chamber by the narrowest of margins. McConnell can no longer exercise a veto over any and all legislation.

I hope the Democrats convoke hearings into the mob violence yesterday. It appeared that most protesters were allowed to disperse but some were arrested. It is 2021, so everyone has a cellphone and cellphones yield important information: With whom were they planning their activities? Did they consider violence? Who inspired them? It is up to the courts to bring criminal charges if such charges are warranted, but the entire nation deserves to learn a great deal about these coup plotters.

The moral reckoning for the Trump presidency will be long and arduous. Many will be indicted before history, including too many U.S. bishops, for turning a blind eye to the countless depredation of democratic norms perpetrated by Donald J. Trump in the past four years. And we still have two weeks to go before Trump is evicted from the White House.

Yesterday was remarkable. Many commentators noted that it was the first time the Capitol had been overrun since the British Army did so in 1814. It was also a predictable exclamation point on this narcissistic, amoral presidency. It should disgust everyone but it should not — it must not — allow quislings like McConnell and Cruz and Ingraham and Arroyo to escape the public shaming that they have so richly earned. You do not need to break down a door in the U.S. Capitol to insult democracy. Those who fed the flames of this lunacy deserve nothing but opprobrium.