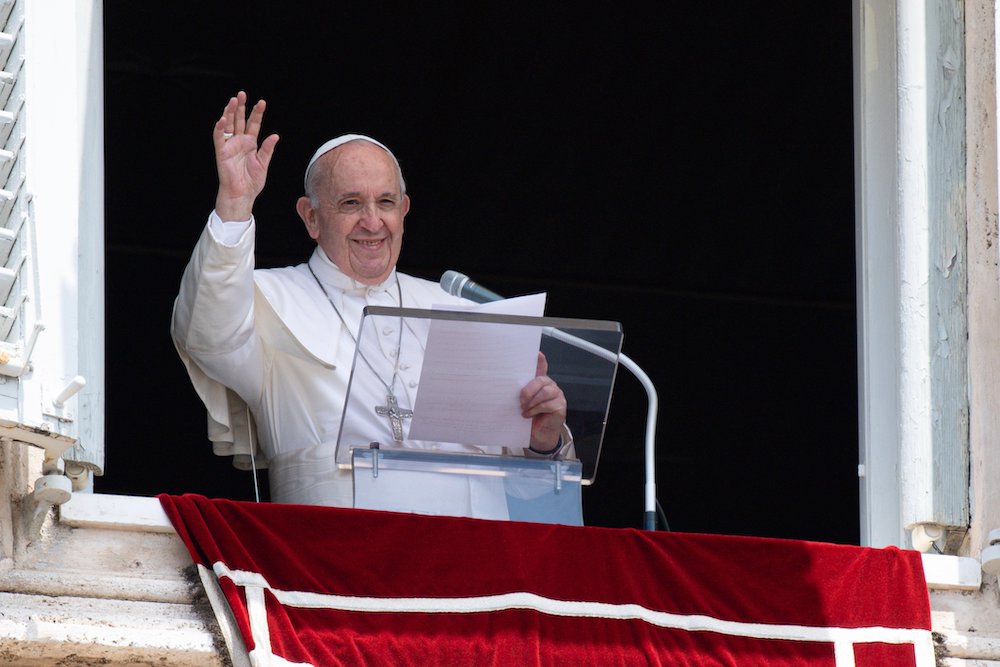 Pope Francis greets the crowd gathered in St. Peter's Square at the Vatican for the midday recitation of the Angelus July 4. After speaking about the day's Gospel reading and leading the prayer, Pope Francis went to Rome's Gemelli hospital for colon surgery. (CNS/Vatican Media)

Pope Francis is not just the head of this worldwide hierarchic structure we call the Catholic Church. He is the pope, and the Greek root of that word, pappas, or "father," became vividly clear on Sunday night when news broke that Pope Francis was having surgery.

Phone calls, emails and tweets exploded in a volcano of emotion and concern. Not one fretted about Pope Francis' "agenda." The governance of the church entrusted to the pope was not at issue. No one worried about a potential conclave. Eventually, longer conversations got around to trying to ascertain what any compromise in the pope's health would portend for the church. But the initial reaction was visceral and familial. It was not a principle that was in danger. It was not a belief. It was a person, the pope, our pope.

Once again, the limits of analogizing between the life of the church and, say, the world of politics or other social organization, came into view precisely. The dialogue between theology and social science was reminded of its limits.

In his famous Novanglus letters, written in 1775, the future President John Adams wrote that a republic is a "government of laws, and not of men." Ultimately, the U.S. Constitution set forth the basic law out of which all our other particular laws emanate. Those laws are "no respecter of persons," that is, they apply — or are meant to apply — to all equally, and when they are not so applied, we recognize an injustice is being done. It is in countries blessed with a government of laws that the civil power, while often inadequate and frequently misused, can avoid the capricious use of power, which is no small blessing.

Indeed, the scariest thing about today's Republican Party is that it is in danger of becoming committed to a government of men, or at any rate, one man, former President Donald Trump, laws and principles be damned. Trump is to the GOP what the Red Queen is to Wonderland: She, remember, invoked no law but her own will when she shouted "Off with his head," just as Trump took cognizance of no law when he asked the Georgia secretary of state to "find" an additional 11,780 votes so that he could win the state.

The Catholic Church, however, is not a government of laws; it is a communion of persons. Yes, we have our canon law: Any society that seeks to organize itself must have some legal structure. Yes, the word "communion" is amorphous and somewhat indistinct, reflecting the fact that it describes a reality that can only be perceived with the eyes of faith. And, yes, we have a hierarchic structure that is clear and often rigid, allergic to change, definable.

But relationships within the church go more deeply than those of the state. The church is founded, ultimately, on a person and an event, the Lord Jesus and his passion, death and resurrection. He is our constitution. Even the Scriptures, though written and canonical, have no force except that which derives from the conviction of believers that those Scriptures are revealed and true. The Gospel is heard, not read.

The papacy has changed through the centuries. The relationship of the center to the peripheries has always been an object of flux in the history of the church. We live at the end of a period in which an unprecedented degree of ecclesial power has been vested in the pope, not only doctrinally with the definition of papal infallibility at the First Vatican Council, but functionally, because new means of transportation and communication have allowed Rome to exert a much higher degree of vigilance over the universal church. What is more, the separation of church and state, so long fought by the Vatican, has in fact resulted in the pope having greater power in the selection of bishops now than at any time in its first 19 centuries. No one can pretend to control an organization without control over its personnel.

This zenith was not foreseeable in the late 18th century when the power of the papacy hit its nadir. Anti-papal ideologies — Gallicanism in France and Febronianism in Austria — were powerful forces. The suppression of the Jesuits, forced upon Pope Clement XIV by the Bourbon monarchies, was a severe blow to ultramontanism. In a series of ultimately fruitless efforts to maintain the papal states, successive popes became dependent on different rulers. Pius VI and Pius VII would both be imprisoned by Napoleon.

Pius VI, in an effort to hold on to some of the church's prerogatives, traveled to Vienna in 1782 to intervene with the Emperor Joseph II. (Frederick the Great derisively referred to the emperor as "brother sacristan.") The fact of the trip was itself a mark of papal impotence: In the High Middle Ages, popes commanded emperors to come to Rome, they did not go miter in hand to the emperor! At the level of politics, the trip failed to stem to the tide of Febronianism.

But a funny thing happened during this failed trip. The peasants lined the pope's route and knelt as his carriage passed by. The theological and political issues that required the trip were unknown to them. They knew he was the successor of Peter, Jesus' best friend when he walked the earth. They knew that the priest mentioned him at every Mass, in the Roman Canon itself, so that they were all praying for him every day. They knew the pope was their father in faith and they knelt to ask for his blessing as his carriage made its way to the city on the Danube.

Sunday night, I added the pope's name to the list of other friends for whose health I was praying, although I have never met him. Those prayers had nothing to do with Pope Francis' commitment to synodality, nor to his teachings on this issue or that. This good man, our pope, was in the hospital and I wanted him to get well. I suspect millions of Catholics around the world did the same. Ours is no church of laws, but a communion of persons, founded on divine love poured out for us. Sunday night, we were reminded of that.