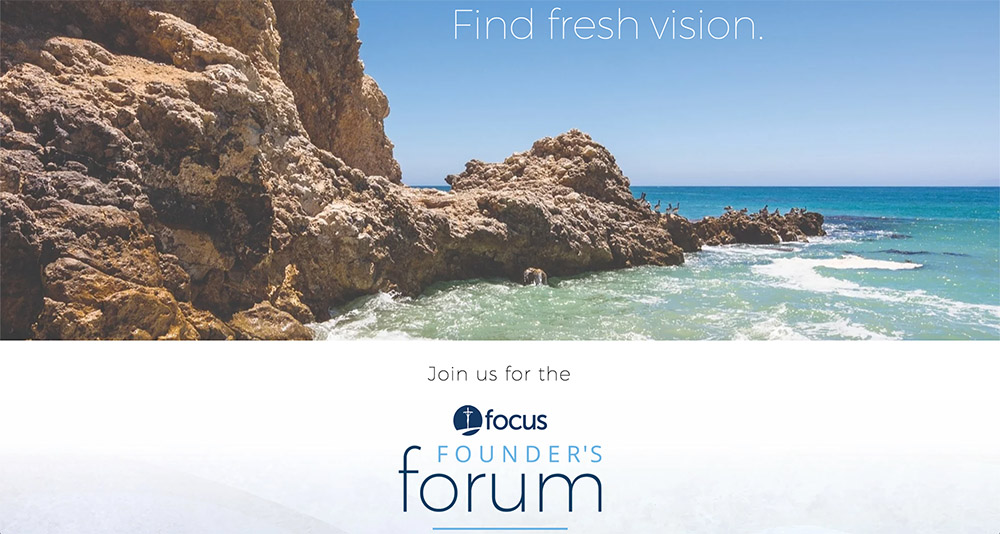 The "FOCUS Founder's Forum" is billed as an opportunity to join a "small group of friends for a transformative weekend of vision, inspiration, and impact" and is being held at the Ritz-Carlton, Laguna Niguel, a luxury resort overlooking the California coast. (NCR screenshot)

Like most Americans, now that we are all vaccinated, I would love to start traveling. Unfortunately for me, I am saving money to redo my kitchen next summer and so the travel budget is nonexistent.

That is why I was thrilled when I read on the webpage advertising the "FOCUS Founder's Forum" in October that "it would be our pleasure to treat you to the entire weekend, including hotel, breakfasts, and dinners," as reported yesterday by my colleague Christopher White. The hotel in question is the Ritz-Carlton, Laguna Niguel, where the rooms that weekend go for $881 a night, so the fact that they are free is a real blessing.

FOCUS is the Catholic version of what used to be known as Campus Crusade for Christ. My colleague Heidi Schlumpf reported on FOCUS in 2018. Young missionaries are recruited to evangelize on college campuses. According to priest friends who have worked with the missionaries, they are as likely to be crusading for Cornelius Jansen, the Dutch theologian who gave his name to the elitist, and heretical, rigorism that afflicted the church in France in the 17th and 18th centuries, but lives on in the United States as a kind of fusion of the American dream with those passages of the Pauline epistles when you just know the apostle to the gentiles was having a bad day.

Not only will I and the other attendees get a good night's sleep on someone else's dime (I am betting the sheets have a thread count double what I am used to!), but the resort is perfectly suited to the religious mission of the organization.

"Perched on a bluff overlooking the Pacific Ocean, The Ritz-Carlton, Laguna Niguel is the perfect setting for a weekend of vision," the website tells us. "This beautiful property fuses modern luxury with playful creativity, the perfect expression of the eclectic and warm personality that makes Dana Point and Laguna Beach unique. Throughout the FOCUS Founder's Forum, you'll have plenty of time each day to enjoy all that the resort and local area have to offer — from ocean-inspired spa relaxation and seaside golf escapes to gourmet dining and gallery hopping."

So, between discussions about how we can help young people follow our crucified Lord, we will have time for a mud bath, 18 holes, some foie gras and a bit of shopping for a nice watercolor.

And what an eclectic list of speakers! Former President George W. Bush, who is not a Catholic, is one of the presenters, as is New York Cardinal Timothy Dolan, who is a Catholic. I am not sure why Jay Leno is giving a talk. Maybe listening to Bush and Dolan reminisce about the days when being a Republican did not entail apologizing for Donald Trump will put us all in the mood for a laugh.

One thing the assembled donors will likely not do is offer the prayer to St. Dominic, written by Blessed Jordan of Saxony, who succeeded Dominic as master general of the order: "Inflamed with zeal and the celestial fire of God, because of your perfect and apostolic poverty, you have wholly devoted yourself to the apostolic religion and at last you have brought this virtue to its perfection through the establishment of the Order of Friars Preachers."

Really, who can think about "perfect and apostolic poverty" when your room has such a gorgeous view?

I wonder if the attendees will go out into the streets of Laguna and recruit the homeless for one of the dinners? St. Pope John Paul II told the assembled faithful at Yankee Stadium in 1979, during his first papal visit to the U.S., "You must never be content to leave them [the poor] just the crumbs of the feast. You must take of your substance, and not just of your abundance, in order to help them. And you must treat them like guests at your family table."

Our current pontiff, Pope Francis, famously said in the first days after his election, "How I would like a poor church for the poor." The pope, like all religious, took a vow of poverty as a young man to better imitate Christ and specifically the interior freedom that poverty makes possible.

I wonder if the pope would feel comfortable at the Ritz-Carlton, Laguna Niguel? The question is facetious: No one wonders that. Francis would be scandalized by this "Lifestyles of the Rich and Famous" version of Catholic missionary discipleship. And so should you.