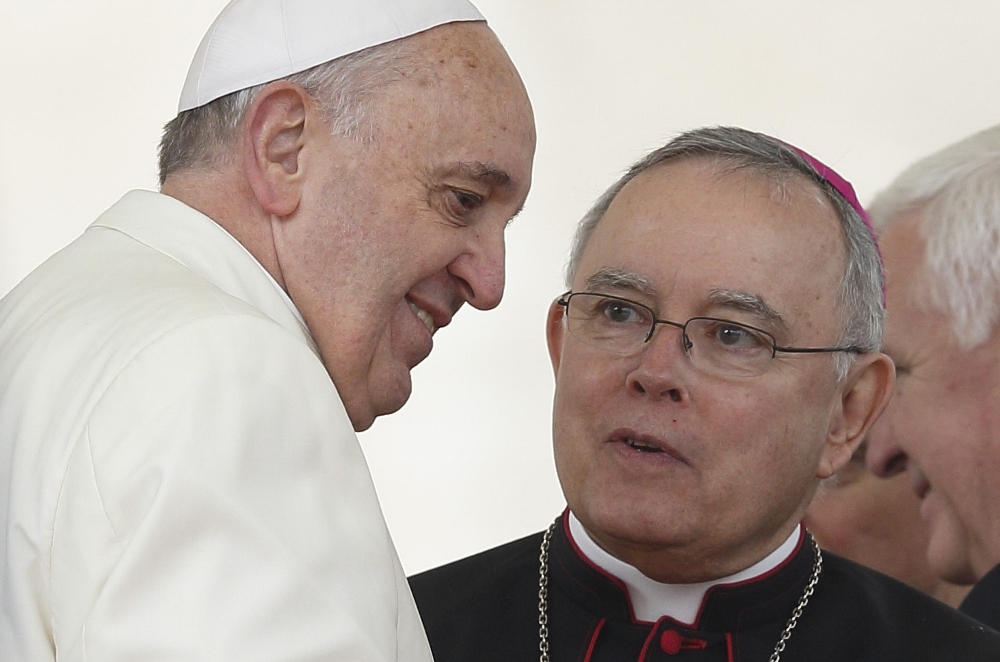 One year left. Last week, on Sept. 26, Archbishop Charles Chaput of Philadelphia turned 74 years of age, and so he will be submitting his resignation to the pope as required by canon law this time next year. The archbishop is not going down without a fight. Indeed, his title could be "Leader of the Opposition," such is his aversion to this Holy Father and his pastoral program.

Chaput is headed to Rome this week because he is a delegate to the Synod of Bishops, which opens on Wednesday. He is not entirely happy to be attending the event, which will discuss young people and vocational discernment. At the end of August, he disclosed that he had written to Pope Francis urging him to cancel the meeting, or at least to change its topic.

"I have written the Holy Father and called on him to cancel the upcoming synod on young people. Right now, the bishops would have absolutely no credibility in addressing this topic," he told a conference on Aug. 30.

I was prepared to dismiss this complaint as merely another example of myopia on the part of an American. The U.S., most especially Pennsylvania and New Jersey, is engulfed in a clergy sex abuse mess of the bishops' own making and the universal church needs to stop a long-planned and important international event to attend to our issues. We are Americans. Does not the world revolve around us? Shouldn't the church do so as well?

We now know that Chaput's real objective was simply to stop the synod by any means necessary. How do we know this? Because he has now published a critique of the synod's instrumentum laboris (working document), which he says he "received from a respected North American theologian." Chaput states the critique is "substantive enough to warrant much wider consideration and discussion as bishop-delegates prepare to engage the synod's theme." Since he decided to publish it under his own name, we can safely assume he agrees with its thrust, if not each and every item raised.

And what is that thrust? Taken as a whole, the critique resembles an American tourist yelling at a waiter in a Parisian restaurant because the waiter does not speak English. This unnamed theologian — and why he or she did not see fit to put their name on this document is beyond me — faults the instrumentum laboris because it does not adhere to the theological perspective of the author. Imagine that: a North American theologian in this day and age whose stance is "my way or the highway"?

The specific concerns raised are just as specious and also a bit weird. The first charge is that the instrumentum laboris is guilty of "naturalism."

"The IL displays a pervasive focus on socio-cultural elements, to the exclusion of deeper religious and moral issues," the criticism states. "Though the document expresses the desire to 're-read' 'concrete realities' 'in the light of the faith and the experience of the Church,' the IL regrettably fails to do so."

This is nonsense. The instrumentum laboris does not display "naturalism." It evidences the "see, judge, act" approach that has long characterized the theological approach of many theologians following on Gaudium et Spes. This approach has been especially prominent in Latin America, and not merely in theological circles but in the magisterial teachings of their bishops' conferences. Alas, in Philadelphia, His Grace pursues a North American variation: See nothing, judge everyone, act ridiculously.

The second point of the critique is that the instrumentum laboris demonstrates "an inadequate grasp of the Church's spiritual authority." The author objects to the emphasis placed on dialogue as the method and style appropriate to the church.

"In other words, the Church does not possess the truth but must take its place alongside other voices," the anonymous theologian writes. "Those who have held the role of teacher and preacher in the Church must replace their authority with dialogue."

The phrase "in other words" permits an analogy or a metaphor or an explication, but not a distortion. And, in this instance, one sees just how hypocritical the archbishop's endorsement is: In calling for the synod to be canceled, Chaput said the bishops could not be credible on the subject of young people. Does he think refusing dialogue and insisting on "their authority" is the way to restore their credibility?

The third objection raised is that the instrumentum laboris does not mention "the [human] will" and, consequently, has "a partial theological anthropology." He claims the authors replace the concept of "will" with that of "affectivity," but the instrumentum laboris pairs "reason" with "desire" which is certainly a synonym for "will." And the theologian quotes that passage. This is grasping at straws.

The fourth complaint is that the instrumentum laboris embraces "a relativistic conception of vocation." This comes close to the concerns raised by conservatives about the treatment of conscience in Amoris Laetitia. It is not news that conservative theologians, alarmed by the retrieval of a thoroughly traditional understanding of conscience have, since Vatican II, favored a constricted, nontraditional and Neo-Scholastic elimination of any role for conscience in moral decision-making. It is not news, but it is Burkean bunk, the triumph of a legalistic approach to pastoral theology over a more Thomistic, and pre-Kantian, understanding of the role of conscience in moral theology.

The last named concern — that the instrumentum laboris evidences "an impoverished understanding of Christian joy" — does resonate with me. The anonymous theologian writes, "Despite its constant reference to 'joy,' nowhere does the IL describe it as the fruit of the theological virtue of charity."

This is an oversight and the synod fathers should certainly correct it. I say this not only because it is worth mentioning on the merits but because the eventual document from the synod should bend over backward to make itself understood to all Catholics, including conservatives. Just because they prefer to close their ears and eyes to anything that comes from Francis does not excuse him from the obligation to try again and again to reach out to them.

That said, how utterly ironic that this concern earns the endorsement of Chaput, whose preferred method of public engagement is the snarl.

I am not sure what Chaput and other conservatives think they are doing. In 2014, Cardinal Walter Kasper came to the Catholic University of America in Washington, D.C., and he was asked about the opposition to Pope Francis. He said that they acted as if this pontificate was a bit of bad weather and they were hoping it would pass quickly. Four years later, the opposition has intensified, but it has not grown and its essentially American character has become more and more obvious.

The rest of the world rallied to Francis after the despicable attack on him by former nuncio Archbishop Carlo Maria Viganò. It was Chaput himself who praised Viganò, not the pope, to The New York Times the next day.

Francis is not going anywhere fast, and even if he stepped down tomorrow, I highly doubt the cardinals will elect Cardinal Raymond Burke pope. What, then, is Chaput's objective? He is merely an obstructionist, no doubt disappointed to be the first archbishop of Philadelphia in more than 100 years to not receive a red hat, a man whose primary intellectual attributes are a lack of suppleness and a limited range. He is a testy man, increasingly embittered, whose tenure as a bishop coincides precisely with the rise of the "nones," never taking responsibility for the failure of his own pastoral strategies, always blaming others and amorphous forces for his own inability to effectively evangelize. That is his legacy. No wonder he seems so angry all the time.