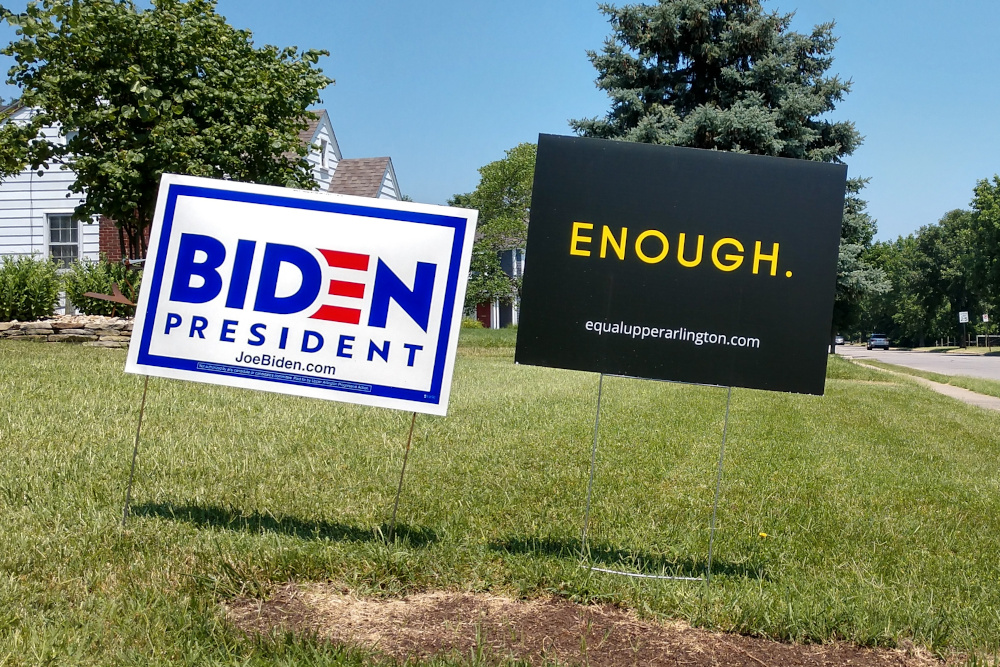 A sign supporting Joe Biden for president is pictured in the yard of a home in Upper Arlington, Ohio (Wikimedia Commons/Dan Keck from Ohio/CC0)

The group, Republican Voters Against Trump, released an ad last week that was devastating in its way, featuring a voiceover of President Ronald Reagan invoking the "shining city upon a hill" while showing images of America under President Donald Trump.

The images are a kind of dystopian photographic negative to Reagan's sunny optimism, so sunny that he added the sparkling word "shining" to the "city on a hill" image bequeathed to us by John Winthrop, the first governor of Massachusetts Bay Colony.

I confess to my ambivalence about this project. Reagan is a hero to the Republican Party and to many fellow Americans, but he helped to usher in a period of conservative and libertarian politics that has only now begun to shatter. He was helped by the left's turn from pragmatism and policy, especially economic policy, to culture and semiotics, to be sure, but he capitalized on the opening the left's failures created, and defined politics in ways that are really only now, in this horrible pandemic, becoming quite so obvious.

"The nine most terrifying words in the English language are: 'I'm from the government and I'm here to help,' " Reagan famously quipped. Now, only the government is in a position to coordinate the response to both the pandemic and its economic consequences. We need that help and it is terrifying that it has been so lacking.

That lack is precisely why I shall quash any qualms about welcoming these Republican voters who are willing to join the effort to deny Trump a second term. Ambivalence be gone. There will be time after the election to register our differences over the Reagan legacy. Now, Democrats and all who are concerned about the singular damage Trump is doing to the fabric of our society and the foundations of our democracy should not quibble over the past.

I am reminded of how Winston Churchill responded when some members of parliament questioned his praise of Joseph Stalin after Hitler invaded Russia: "If Hitler invaded Hell I would make at least a favorable reference to the devil in the House of Commons." We are in the position of Franklin Roosevelt recognizing that he needs Charles de Gaulle after all.

Let there be no recriminations against these Reaganites who wish to help oust Trump, no settling of old scores. "To every thing there is a season, and a time to every purpose under heaven" (Ecclesiastes 3:1). Now is the season for clean slates.

This sentiment runs counter to much of the national mood. I read in The New York Times that the communications director at Boeing, the happily named Niel Golightly, resigned because someone complained about an article he wrote in 1987 arguing against having women in combat, which was a real issue back then. His article was filled with nonsense, to be sure but, according to the article he has developed a reputation for promoting women to positions of responsibility in his long career. In the current climate, "off with his head" is so much easier than drawing distinctions.

During the primary season, Democratic presidential hopefuls outdid themselves in making it clear that they believed there was no room for pro-life voters in the party. In 2017, then-House Minority Leader Nancy Pelosi had to step up to the pro-choice extremists and say that there was room for pro-life Democrats in the party, famously saying of the people with whom she grew up in Baltimore: "Most of those people — my family, extended family — are not pro-choice. You think I'm kicking them out of the Democratic Party?"

Earlier this year, Hillary Clinton refused to promise to support Sen. Bernie Sanders if he won the nomination. In a documentary, Clinton said: "He was in Congress for years. He had one senator support him. Nobody likes him, nobody wants to work with him, he got nothing done. He was a career politician. It's all just baloney and I feel so bad that people got sucked into it."

Clinton went on to complain about the "Bernie Bros" and others who supported Sanders in 2016. Four years later, she is still blaming Sanders.

You do not have to share Fox News' paranoid fears about "cancel culture" to recognize that there are unhealthy and illiberal currents running through the culture at this moment. Anyone with eyes to see knows that litmus tests are a dime a dozen, and they will only strengthen as the election nears and the prospect of a Democratic Party win takes shape.

Former Vice President Joe Biden needs to explain where he stands on issues so he achieves a genuine mandate: Those who say, "just win" at any cost and we can worry about governing later, are deeply cynical and that cynicism is what paved the way for Trump in the first place. However, Biden is capable of letting those with whom he disagrees on this issue or that know that they are still welcome at his party.

Those who say, "just win" at any cost and we can worry about governing later, are deeply cynical and that cynicism is what paved the way for Trump in the first place.

Here is the thing: It is not only vital that Biden defeat Trump. It is vital that he defeats him by a large margin. Already, the president is warning about voter fraud and a "rigged election." Can you imagine what kind of nightmare the country would go through if we have a repeat of the 2000 Florida debacle this year? No. On election night, it is important that the margin be so large, even Trump must acknowledge it.

That large margin is important for another reason. The illiberal pressure of special interest groups will be strong in a Biden administration. If the Democrats hold the House and take the Senate, there will be no incentive to compromise and the extremists will want to run wild. But, the first task facing the next president will be to try and unite the country. It is a task for which Biden is suited by both temperament and history.

So, let the net be cast wide. Let the tent be built big. Wipe the slates clean. The goal is to win and win big in November — and then to set about the task of uniting this great country by returning to the essence of liberal governance: social improvement and extending equality and human dignity.

A version of this story appeared in the Aug 7-20, 2020 print issue under the headline: Time for Biden to build a big tent.