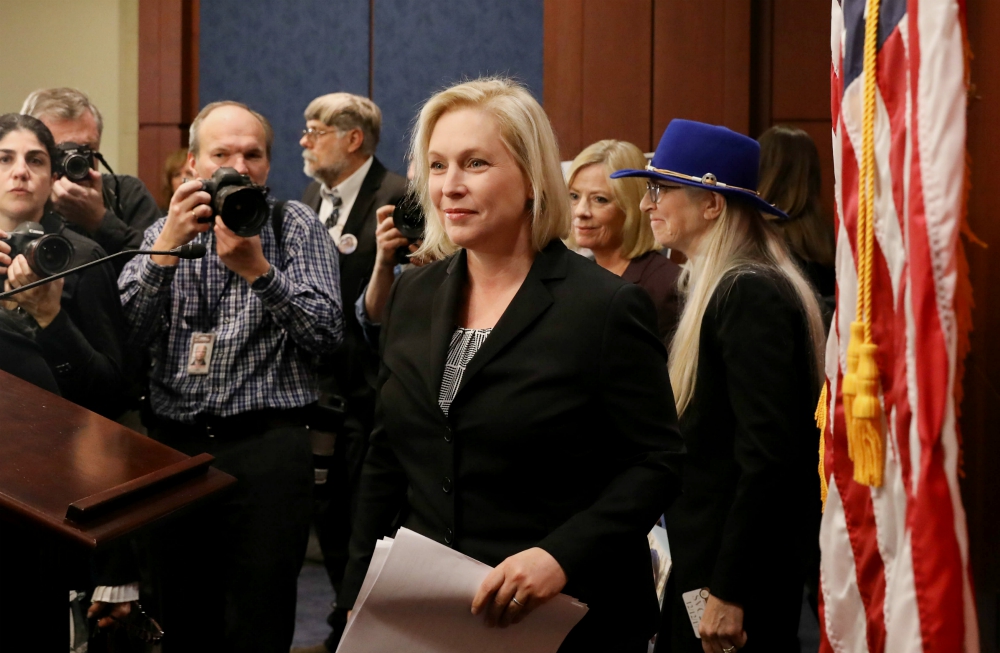 Last week, I explained why I was finding myself more enthusiastic than I had expected about the candidacy of Sen. Elizabeth Warren. Warren was joined last week in the 2020 presidential race by former Secretary of Housing and Urban Development and former San Antonio Mayor Julian Castro, about whom I will write another day.

Today, I would like to focus on the other candidate who joined the race, New York Sen. Kirsten Gillibrand, who announced her candidacy on Stephen Colbert's "Late Show." I am in bed by that time of night, but I watched her interview on Rachel Maddow's show the next night. She was underwhelming.

Maddow's introduction did not evade the fact that Gillibrand had undergone a "transformation" or an "evolution" in her views. As a congresswoman from an upstate New York district, she had an "A" rating from the National Rifle Association, supported making English the official language of the country, and referred to undocumented immigrants as "illegal aliens." When she became the Empire State's senator two years later in 2009, she shifted to the left pretty quickly.

The question about this change was not just predictable. It was the most predictable question, not least because Maddow is the most popular newscaster in leftie political circles. And Gillibrand was prepared. She said she "recognized I didn't know everything about the whole state."

She told a story about meeting the family of a teenage girl who had been shot and killed in Brooklyn. "I just knew I was wrong, and I knew that I had to do something to make sure that young, beautiful girl did not die in vain," she said. She wrote a bill on gun trafficking and explained that she was now a leader on these issues.

OK. I have never lived in New York state, but I think I know that people die from gun violence there and I knew it in 2006, when Gillibrand was still busy securing her "A" from the NRA. Perhaps the story about the effect this family's suffering had on her was true and certainly, like all good candidates, she has learned that a good story is worth a thousand data points.

It was interesting that she noted her introduction of a bill that would ban gun trafficking. She neglected to mention the bill did not pass. That is not her fault. Of course, you can't pass gun control legislation when the Republicans control the Senate. But don't pretend that writing bills that won't pass has anything to do with actual governance, a point Castro, who was a mayor, will be sure to make on the debate stage. And, besides, legislative speak is deadly and Gillibrand has not learned how to shake it.

When Maddow asked her about her shift on immigration, and the fact she had told another interviewer she was embarrassed by her previous stance, Gillibrand said, "Well, I don't think it was driven from my heart. I was callous to the suffering of families who want to be with their loved ones. ... I recognize, as we all do, that immigration and diversity is our strength as a country; it's always driven our economy. It's the American story. ... I really regretted that I did not look beyond my district." Does this add up?

Later, she spoke about the need to bring people together, and made a stunning claim: "You can find common ground with anybody on any issue." She noted she had just worked with Sen. Ted Cruz on some legislation.

I can think of half a dozen issues on which common ground is not possible, and shouldn't be, such as building the wall, or keeping the Iran nuclear deal, or protecting voting rights, or honoring the promise made to the Dreamers, or voting to confirm certain nominees. After a commercial break, she was touting her voting record as the senator who has voted against President Donald Trump more than any other.

Another strange moment came when Gillibrand said, "You have to take on the corruption in Washington. ... There is so much money and greed. ... My vote is not for sale."

This remarkable claim from someone whose campaigns have largely been funded by big-dollar donors on Wall Street does not pass the smell test. CNBC had just reported that Gillibrand had reached out to Wall Street executives to assess their willingness to back her campaign. The Center for Responsive Politics has applauded Gillibrand's decision to reject PAC money but also noted her reliance on the financial industry for campaign support. Maybe what she meant is that her vote is no longer for sale because she has already sold it.

A friend who knows politicians better than I do said of Gillibrand, "She is incapable of sincerity." There was nothing in the Maddow interview to disprove that assessment.

That does not mean she won't win the primary within the primary on the neoliberal side of the Democratic Party, where she will be facing Sen. Kamala Harris, who has her own issues with fat-cat financing, and former Congressman Beto O'Rourke, who might have sunk his campaign before it started with an interview that could only be excused if he admits he was really high when he gave it.

But I do not see Gillibrand going toe-to-toe with any of the candidates vying for the populist mantle in the other primary within the primary. She would have to be far more talented a campaigner than she is to overcome the fact that all the energy in the party is with the populist, not the neoliberal, wing of the party. If those Wall Street businesspeople she has befriended are such smart investors, when she comes knocking for donations to her campaign, they should keep their checkbooks in their pockets.