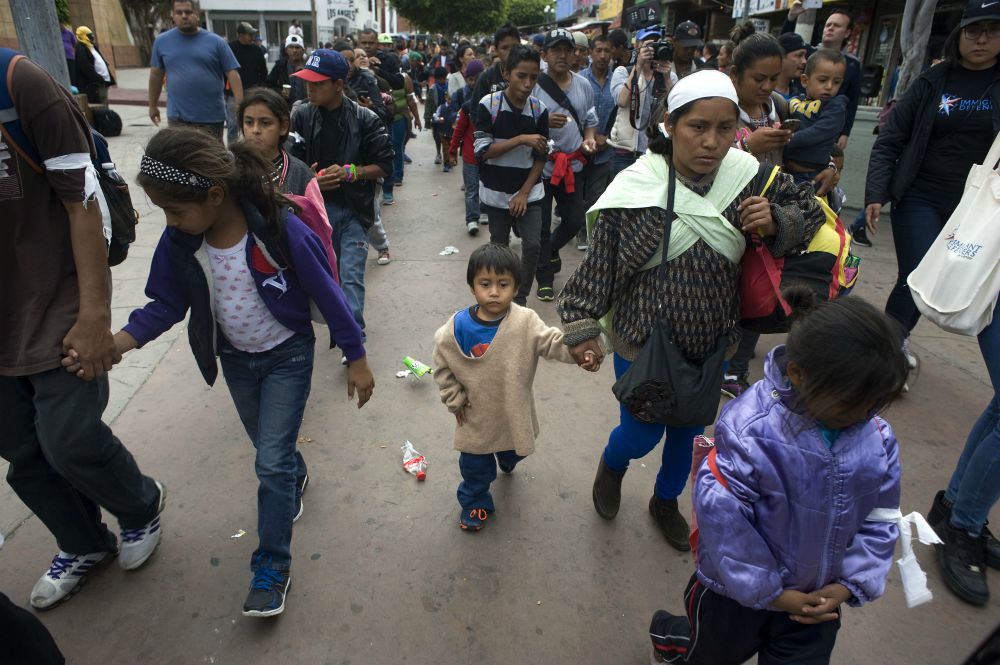 Central American migrants walk to the U.S.-Mexico border crossing April 29 in Tijuana, where they presented themselves for asylum. Now, however, following the Trump administration's "zero tolerance" policy, families who enter without first presenting for asylum are being separated. (CNS/David Maung)

"If you are smuggling a child, then we will prosecute you, and that child will be separated from you as required by law," Attorney General Jeff Sessions said during a speech to the Association of State Criminal Investigative Agencies May 7. "If you don't like that," he added, "then don't smuggle children over our border."

This was Sessions announcing the new "zero tolerance" policy for immigrants crossing illegally into the United States. We're already seeing the effects: The number of minors in U.S. custody was 10,773 on May 29, according to the U.S. Health and Human Services Department, an increase of about 2,000 minors in custody since the policy was announced.

Making family separation a point of government policy is unacceptable and immoral. For anyone purporting to hold and support family values it is abhorrent. On a policy level, it is ineffective: It deters no one and keeps no one safe.

As we have seen time after time with this administration, the policy was announced without being thoroughly thought through and with no planning. Border agents and child welfare agencies had no advance warning. By early June, Homeland Security facilities to house minors were at capacity. On June 5, NBC News reported that of 550 children in detention in U.S. border stations, 300 of them had been in custody more than 72 hours — and nearly half of those are classified as "tender age children," meaning under the age of 12. The New York Times found more than 100 children under the age of 4 have been separated from their families.

No law requires that migrant families be separated at the border. Previous administrations have treated this as an administrative, not criminal, issue. The Trump administration could to do the same but has chosen not to.

Some suggest that people with legitimate fears should seek asylum before entering the U.S. But that process is becoming increasingly difficult. At the end of May, Jesuit Fr. Sean Carroll, executive director of the Kino Border Initiative, with dual offices in Arizona and Sonora state, Mexico, said his program had 89 people — 57 of them children — waiting to be received by U.S. Customs. Most were from Guatemala. While Customs usually makes a near-immediate determination of the strength of asylum-seekers' cases, now "people are waiting," Carroll said. Some had been with Carroll six days already.

The United Nations human rights office said June 5 that the policy "is a serious violation of the rights of the child," and called on U.S. authorities to adopt noncustodial alternatives. The ACLU has filed a class-action lawsuit in federal court in San Diego, calling for a halt to separations and for reunification of families.

As Bishop Joe Vásquez of Austin, Texas, chairman of the U.S. bishops' Committee on Migration, said in a statement June 1, "Family unity is a cornerstone of our American immigration system and a foundational element of Catholic teaching. ... Rupturing the bond between parent and child causes scientifically-proven trauma that often leads to irreparable emotional scarring."

"My brother bishops and I understand the need for the security of our borders and country, but separating arriving families at the U.S.-Mexico border does not allay security concerns," Vásquez said. "Children and families will continue to take the enormous risks of migration — including family separation — because the root causes of migration from the Northern Triangle remain: community or state-sanctioned violence, gang recruitment, poverty, and a lack of educational opportunity."

"Policies should address these factors first as we seek to repair our broken immigration system," the bishop said.

Vásquez has hit on the hard truth: The root causes of our "migration problem" lies on the other side of our borders and they are sown with the seeds of foreign policy mistakes the United States made in Central America over the last six decades — supporting dictatorships, quashing democracy and imposing imperialistic economic policies. The United States has never taken responsibility for the part we played in creating the violence, poverty and lack of opportunity that force our brothers and sisters south of our borders to uproot their families and flee north.

Eradicating the problems that force people to leave their homes is the best deterrent.

This story appears in the Families Separated at the Border feature series. View the full series.
A version of this story appeared in the June 15-28, 2018 print issue under the headline: Family separation is immoral, ineffective.