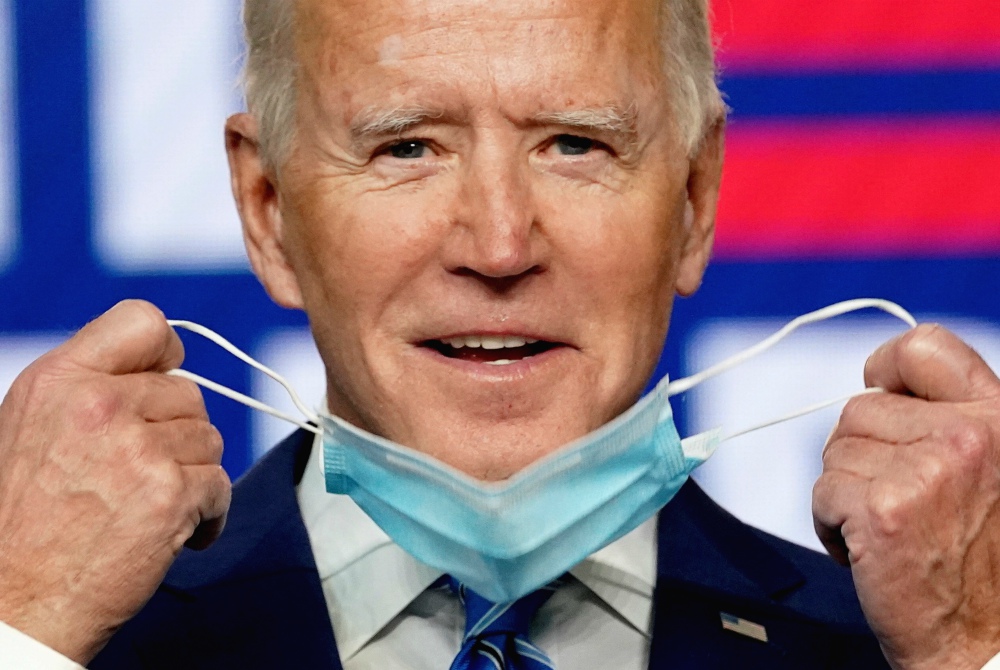 Joe Biden removes his face mask to speak about the presidential election results during an appearance in Wilmington, Delaware, Nov. 4. (CNS/Reuters/Kevin Lamarque)

For only the second time in our nation's 244-year-history, a Catholic has been elected to the highest office in the land. Joe Biden, the former vice president, a cradle Catholic and current parishioner at St. Joseph on the Brandywine in Greenville, Delaware, will become the 46th president of the United States.

As fellow Catholics, we offer our congratulations.

The media love the external symbols of Biden's faith: the rosary beads he is known to clutch during a crisis, the rolled-up bulletin in hand as he leaves Mass on Election Day, the quoting of papal encyclicals on the campaign trail.

But his rosary is not just a fashion statement, nor is his faith merely a campaign talking point. His belief in God — and in resurrection and redemption — is the spiritual foundation that carried Biden through the tragic loss of his wife and 1-year-old daughter in a car accident, and the later death of his son Beau from brain cancer at 46.

And the value Biden gives to Catholic social teaching — internalized over a lifetime of practice of the faith, and cemented in grief and loss — impresses us. Biden cares about the common good, the dignity of the human person, stewardship for creation, a preferential option for the poor and vulnerable. Biden has also demonstrated the capacity to get past grudges, work across the aisle and focus on the healing the nation so desperately needs.

"Biden actually sees his Catholic faith as a key for bringing the country back together and overcoming the divisions that divide us," Stephen Schneck, executive director of the Franciscan Action Network, told NCR's national correspondent Christopher White for a profile of Biden's Catholicism in July.

"In his own mind, it's the inspiration to just about everything the campaign is trying to do," Schneck said.

After four years of racism, misogyny and narcissism in the White House, we look forward to a dignified, honest leader who might restore a level of respect for the office and for our nation. It's clear that Biden believes in something bigger than himself.

The race was not an easy one: It included false allegations of being rigged, attempts at voter suppression, canceled conventions, debates so contentious that they necessitated a "mute" button, and a super-spreader event that resulted in one candidate getting sick with the coronavirus.

And it required three days of counting to determine the winner. Now that the counting has finished, the result is clear and there is no rational reason to doubt the outcome.

That so many Catholics did not vote for Biden — some early exit polls say anywhere from 37% to 49% — is evidence of the narrative, on the part of too many church leaders, that to be Catholic is to vote Republican, over the single issue of abortion.

But other issues — the pandemic, health care, the economy — were more compelling to a majority of Americans, and to a slim margin in the Electoral College.

Now is the time to promote unity and integrity after years of suffering for so many. We offer Biden our prayers as he leads us through that process to begin to heal the soul of a nation.

This story appears in the Election 2020 feature series. View the full series.
A version of this story appeared in the Nov 27-Dec 10, 2020 print issue under the headline: NCR congratulates Joe Biden, our nation's second Catholic president.