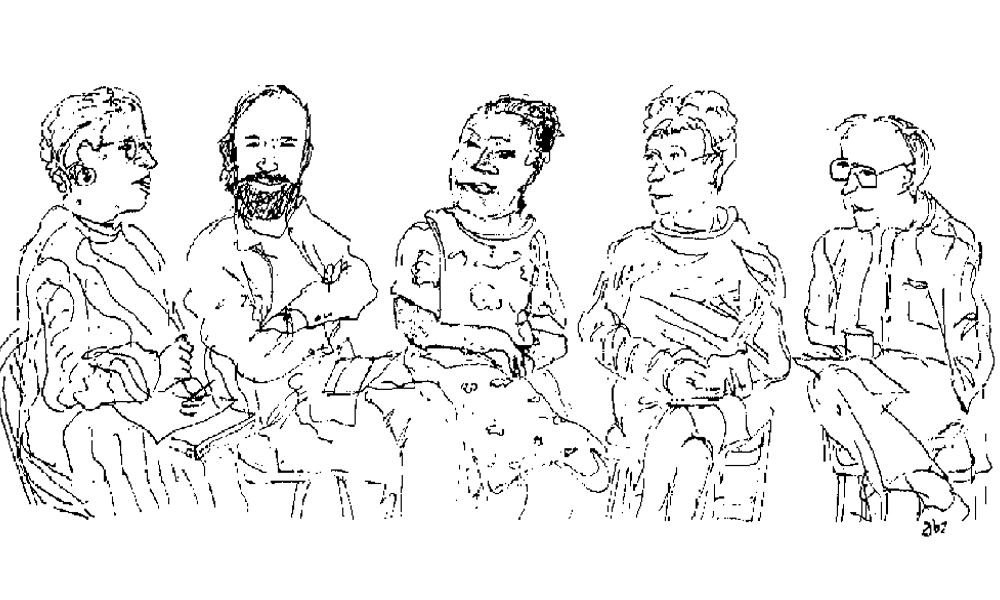 In September, NCR and GSR have reported on three tales of Catholic thinkers censored — Jesuit Fr. James Martin; Boston College theology professor M. Shawn Copeland; and Rebecca Bratten Weiss, co-founder of the New Pro-Life Movement. The excruciating irony of these tales begins with the fact that it no longer requires an edict from the Holy Office or a word of disapproval from the local bishop to silence thought and to pronounce someone persona non grata.

The mechanics have gone digital for sidelining someone like Martin, whose rather mild suggestions in his latest book, Building a Bridge, which urges a kinder church approach to the LGBT community, have stirred the hornet's nest of homophobia. Bratten Weiss was branded as insufficiently pro-life for suggesting the life agenda can and should include issues of women's rights, health care and violence. Word from Madonna University is the decision for Copeland not to speak was mutual, out of fear the situation would get "uglier."

It no longer takes the time it once did for tiny minorities to derail careers by slandering anyone who asks inconvenient questions. Once upon a time, such groups at least had to make the effort to send actual letters to faraway offices in Rome. They at least had to have some pull with officials there who would mistakenly construe a few dozen missives to mean the Catholic population of an entire country was up in arms.

Way back in the mid- to late-20th century, it took time for the wheels of censure to begin turning — and there was at least the appearance of a process. All it takes now is the gangs of cyberbullies with laptops, email lists and Twitter feeds, acting in the anonymity of the ether, to execute campaigns of hate in the flash of nanoseconds.

Make no mistake, however, the antecedents were well-set in those plodding bureaucracies of a previous age. The issues and the language of today, the unctuous and absolute certainty of what Pope Francis calls the "doctors of the law" and the "rigorists," were seeded in previous decades. For years, we watched (and documented) as the Vatican's Congregation for the Doctrine of the Faith, in concert with local bishops, silenced and publicly shamed theologians and others who had become targets of vocal minorities from the outer edges of the community.

Officialdom today is irrelevant to such campaigns. In fact, Martin, a prolific author and an editor at America magazine, even has episcopal protectors who have spoken out boldly in his case. Can laywomen expect the same outreach and protection? Can LGBT Catholics, the subject of these discussions, expect the same protections? Can those who advocate for greater leadership roles for women in the church expect the same consideration?

We long for the day when the answer to these questions is an unequivocal yes. Still, undeniably, the Francis papacy has provided willing bishops the space to confront homophobia and other distortions within the institution with the kind of force and language that would have been unthinkable just a few years ago.

But that matters little to today's cyberbullies. The schooled language of Vatican documents has been transformed into pure, hateful vitriol. Canonical processes have been transmogrified into digital flash mobs.

The cyberbullies are fortified with the language of church pronouncements, still on the books, that call homosexuality "intrinsically disordered." They come armed with episcopally approved lists of political "nonnegotiables" that for some have become virtual articles of faith. Thus equipped and with technology at hand, these groups have grown well beyond the control of any of the structures of the institution they profess to be protecting. The patina of politeness is gone. These gangs are out for unadulterated destruction of personality and career.

The irony, thickly adhering, becomes only more excruciating the deeper one delves into the current circumstance.

Enter Philadelphia's Archbishop Charles Chaput, who evidently is not above holding a finger to the wind, even as he endlessly perceives momentous cultural shifts, inside the church and out, of endlessly historic proportions, all of which invariably spell doom for Christendom.

In the case of Martin, though, he is suddenly all in for civility, kind of, in church life. He decries the hateful ad hominem attacks on Martin, for whom Chaput expresses admiration but on whom he would also render "judgment, tempered by mercy but faithful to Scripture and constant Church teaching" as "an obligation of Catholic discipleship."

How all of those qualifiers to judgment are exercised will be determined, of course, by him who judges.

We're heartened to see the archbishop assume a posture of tolerance here, but it is also essential that the church take note that it was he, while bishop of Denver, who publicly shamed a lesbian couple by backing a pastor who refused to permit the couple's children into the Catholic school. The perceived sins of the parents were rather dramatically visited on the children. Constant church teaching was unalterable and binding in every regard, said Chaput. Church law is unyielding. No further discussion necessary.

Two months later, an identical situation occurred in the Boston Archdiocese. Cardinal Sean O'Malley, one of Chaput's brother Capuchins, took a different tack: Put the interests of the child first. No school would exclude any child because of parents' behavior. Church teaching can break several ways; laws can yield to different interpretations.

Chaput also affirmed the firing of a beloved and reportedly quite effective Catholic school teacher in Philadelphia because she was in a same-sex marriage. It was just "common sense," he said. Rules are rules; church teaching is church teaching. The message to not only the Catholic community but also to the wider culture was clear: Certain people are easy to toss out of the community, no further discussion or qualms of conscience necessary.

In the spring of 2009, Chaput joined a chorus of bishops — more than 50 — condemning the University of Notre Dame for honoring the then-new President Barack Obama as its commencement speaker. Chaput said Catholics "have the duty to avoid prostituting our Catholic identity by appeals to phony dialogue that mask an abdication of our moral witness."

In an email to LifeSiteNews, the same organization that would orchestrate pressure against Martin and Bratten Weiss, Chaput encouraged Catholics to make their "disappointment known to [Notre Dame President] Father [John] Jenkins," albeit Chaput added, "respectfully and also firmly."

It was also Chaput who represented the Vatican in Australia in 2011 on a mission to establish a case against Bishop William Morris, who had presided over the Toowoomba Diocese for 18 years. Morris' crime? He had wondered in a pastoral letter, based on the experience of his diocese, severely strapped for priests, why the church would not consider other pastoral approaches, including ordaining women and bringing back married priests to minister.

Morris was quickly sacked; he never saw the report Chaput delivered to Rome.

Chaput, in his essay on the Martin flap, takes issue with the view that the new cyber militias developed under a generation of John Paul II and Benedict XVI bishops who reshaped "the U.S. episcopate in the image of the 'culture warrior,' " in the words of theologian and church historian Massimo Faggioli.

Chaput may not like the description, but the truth is that the methods and language for sorting out and attacking those considered less-than-orthodox have been under construction for a long time and were especially honed during the John Paul II papacy. The clerical arrogance of that era, if the rogue band now accusing Pope Francis of heresy is any indication, knows no bounds.

The Morris sacking, which happened under Benedict, was inspired by a small group of disgruntled Catholics and was reminiscent of the earlier censuring of Bishop Raymond Hunthausen of Seattle in 1986 and the removal of French Bishop Jacques Gaillot of Evreux in 1995. Each was the target of groups of ultraconservative Catholics who didn't approve of bishops actively working for peace or extending, as they both did, sympathetic treatment to gay and lesbian Catholics.

The irony extends: The Chaput piece appeared online in First Things, a magazine of the far right that applauded the rigid legalism of the John Paul II and Benedict eras. Its editors mocked the work of such writers as Jason Berry and the late Gerald Renner, who kept unearthing difficult truths about one of John Paul's favorite examples of heroic priesthood, the late, disgraced Marcial Maciel Degollado, founder of the Legionaries of Christ.

Chaput's objections aside, that era and some of its bishops provided a master's seminar in intolerance for today's cyber extremists.

We can begin to approach civility in our disagreements when such purges end, when loyal questioners are honored and engaged, not vilified. Those who find themselves cyberbullied today would do well to remember what Loretto Sr. Jeannine Gramick and the late Salvatorian Fr. Robert Nugent, founders of the New Ways Ministry to LGBT Catholics, faced during the John Paul reign. They endured grueling and extended investigations by church authorities. In a sense, Nugent and Gramick wrote the preface to Martin's book.

Those needing counsel on how to handle a few dropped invitations or attacks from the right might consult with Benedictine Sr. Joan Chittister or Franciscan Fr. Richard Rohr, or the lay theologian and spiritual writer Edwina Gateley. They have been through it for decades, yet they remain active, continuing to engage believers in the big questions that matter.

Those who recognize the power of the freedom to ask questions should recall that Fr. Thomas Reese, Martin's Jesuit brother who hired him at America magazine, was fired as editor of that magazine by then-Cardinal Joseph Ratzinger because he encouraged open discussion of nettlesome issues. Reese continues to write and question.

Informed adult Catholics today understand that the community has debated big questions — often with great passion — from its very inception. The questions will never end, nor will the debates. The destruction of personalities and careers can end. We're beginning to see progress in that direction, with church leaders who find the courage to publicly defend those under attack.

Leaders of our institutions, in turn, must do their part to neutralize the cyberbullies. They must not capitulate.