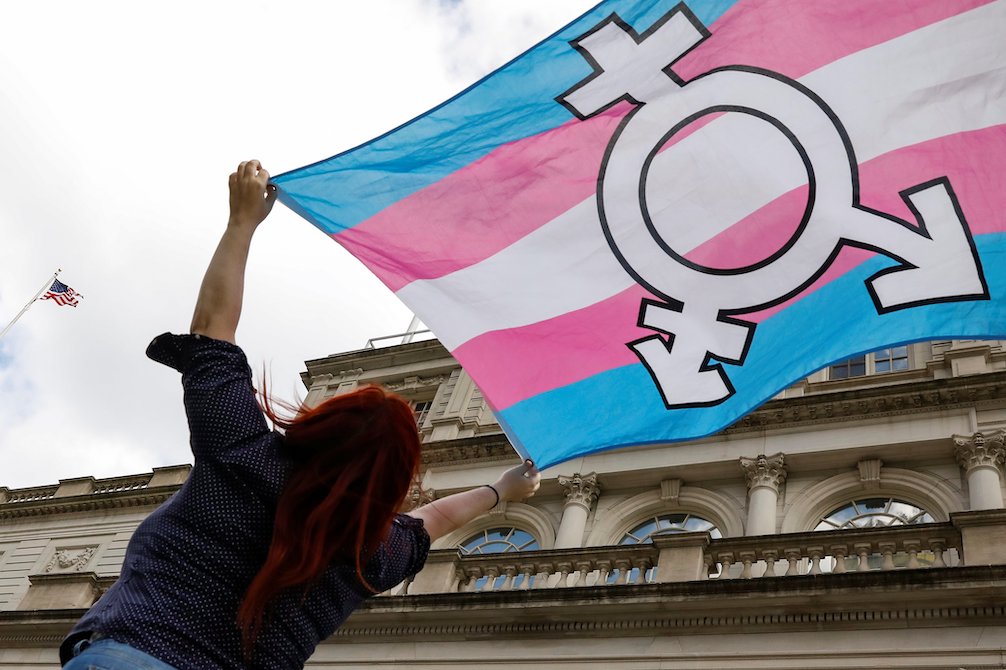 Just because something is new to you does not mean that it is novel or a fad. As obvious as this statement is, sadly, too many politicians and religious leaders alike are responding to broader visibility and awareness of the reality and experiences of transgender persons with a performative sense of shock and alarm. This kind of reaction not only betrays their ignorance of the historical and scientific research on the longstanding reality of transgender identities, but these behaviors also have life-and-death consequences for trans people.

Regarding the inaccurate belief that transgender identity is "new" or some kind of "trend," scholars have demonstrated the falsehood of such claims. Mills College Professor Susan Stryker chronicles the history of transgender persons and the community's variable social visibility over the last two centuries in her 2017 book Transgender History: The Roots of Today's Revolution. As Stryker illustrates in the book, the increasing recognition of the transgender community and broader representation in media and entertainment were only made possible by the heroic activism, networks and support over decades and centuries, which has not yet received adequate attention.

More recently, University of Pittsburgh professor Jules Gill-Peterson, writing last week in The New York Times, addresses acknowledgement of the reality of transgender children for at least the last century in stark contrast to the contemporary political arguments that this is a "twenty-first century issue." Gill-Peterson offers a fuller historical accounting in her 2018 book Histories of Transgender Children. Recounting this history is especially important today given the latest attacks on transgender girls and women in sports.

Care for and protection of the transgender community is a life issue. The targeting, attacking and harm caused to the trans community — as well as contributing to anti-transgender stigma — is a social evil and something Christians and all people of good will ought to resist.

According to the Human Rights Campaign, state legislators have introduced more than 80 anti-transgender bills since Jan. 1, making 2021 a record year for such discriminatory efforts. The proposed legislation covers a range of oppressive actions, including the prohibition of transgender girls and women from participating in school sports and prohibiting or even criminalizing gender-affirming care for some transgender persons. With so many legislative attempts to curb the civil liberties of transgender adults and children, one would assume that there must be some real problems that have surfaced in need of redress by the law.

However, the Human Rights Campaign says, "These bills are not addressing any real problem, and they're not being requested by constituents. Rather, this effort is being driven by national far-right organizations attempting to score political points by sowing fear and hate."

The right-wing political interest in centering discriminatory legislation like what is currently proposed in at least 28 states, is fairly self-evident. In the wake of the 2020 elections, the Republican Party realized that it has little or nothing to offer that appeals to the majority of the population — including much of its electoral base — in terms of fiscal or political policy. Returning to its playbook of cultural warfare distractions (think of the racism of the "war on drugs" of the 1980s and '90s, the homophobia of the anti-gay-marriage legislation during the 2004 presidential campaign, or the anti-intellectualism and science skepticism of climate denialism, among others), the GOP has to select a new scapegoat, and the party's leaders and special interest groups have chosen some of the most vulnerable people in our society.

Decades of gerrymandering have resulted in this evitable race to the ethical bottom. With certain congressional districts statistically a sure win for the Republican Party, the only serious threat to the reelection of many politicians is a primary challenge from the radicalized extreme right. What has resulted is the formation of an echo chamber that perpetuates the vilest talking points and conspiracy theories, which are then adopted by otherwise mainstream politicians out of a perceived sense of necessity to compete with their challengers.

As a result, the absurd becomes normalized, conspiracy becomes truth, and victims become enemies in this vicious circle of evil.

The flurry of gratuitous and dangerous legislative proposals, buoyed by increasing hate speech and transphobic attitudes, is a distraction from real problems like the continuing COVID-19 pandemic, systemic racism, rising income inequality and global climate change, to name a few.

While I can understand such a desperate political ploy, as insidious as it is, what I have a harder time reckoning with is the persistence of transphobia and hatred perpetrated by self-identified Christians, especially by those in ministerial leadership.

Such was the case last summer when the Indianapolis Archdiocese announced new policies that could ban transgender students from attending Catholic schools in central and southern Indiana. Or, two summers ago when the Vatican's Congregation for Education released a truly reckless statement that conflated a number of discrete issues and generally lambasted what anti-LGBTQ activists like to call "gender ideology," an amorphous and essentially meaningless phrase. (You can read my response to the 2019 document here). 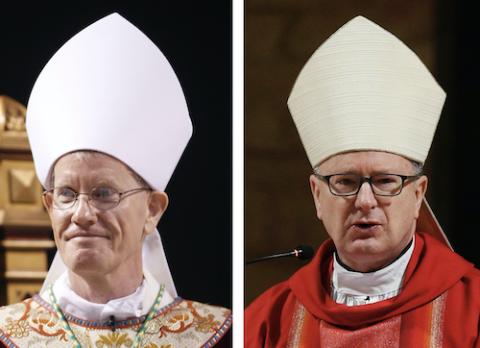 Bishop David Konderla, left, pictured at his ordination in 2016, and Bishop Michael Barber, pictured in Rome in 2020, signed a letter in October 2020 addressed to then-Sen. Kelly Loefler and U.S. Rep. Greg Steube expressing their support for proposed legislation that targeted transgender girls and women in school and collegiate sports. (CNS/Eastern Oklahoma Catholic/Dave Crenshaw and CNS/Paul Haring)

In October, Bishops Michael Barber of Oakland and David Konderla of Tulsa, chairmen of the U.S. bishops' Committee on Catholic Education and Subcommittee for the Promotion and Defense of Marriage, respectively, signed a letter addressed to then-Sen. Kelly Loefler and U.S. Rep. Greg Steube expressing their support — and, tacitly, that of the United States bishops — for proposed legislation that targeted transgender girls and women in school and collegiate sports.

In January, several bishops issued a letter condemning the Biden administration's plans to extend nondiscrimination protections for LGBTQ persons through executive action. The bishops' letter not only attacked protections for couples in legally protected same-sex civil marriages, but it also identified their opposition to civil rights protecting individuals on the basis of their gender identity.

While these examples of individual and corporate transphobia and anti-transgender activism on the part of church leaders represents the most contentious and visible public responses to increasing trans visibility in our communities, they are not the only Catholic responses; nor are they the most Catholic responses.

Last month on "Transgender Day of Visibility," celebrated each March 31 since 2009, the Human Rights Campaign released a joint letter with several "prominent Catholic leaders" — including two bishops, several Catholic organizations and some theologians — expressing support for transgender persons and explicitly condemning anti-transgender violence (full disclosure: I am one of the signatories). The letter draws from a range of Catholic sources, including the teachings of Popes John Paul II and Francis, the Catechism of the Catholic Church and St. Bonaventure, a 13th-century Franciscan theologian and doctor of the church.

The letter closes with these simple, yet powerful, lines: "Transgender people have always been members of our local parishes and the witness of their lives has lead us to greater contemplation of God and the mystery of our faith. To our transgender siblings, may you always know that the Image of God resides in you, and that God loves you."

There have been other constructive pastoral statements and resources, though they often do not receive the attention that the most vocal culture-warrior and transphobic church leaders garner. Such is the case with a recent pastoral resource published by the Catholic Health Association titled "Transgender Persons, Their Families, and the Church." As the small book explains, this is not a project of moral theology but is intended "for the use of Catholic ethicists, chaplains, priests, mission leaders, executives, health care providers and others who want to provide compassionate, quality care to trans persons and their families."

The collection of five first-person narratives is gathered from among those who were invited to speak to the U.S. bishops' Committee on Doctrine about their experiences as Catholics who identify as trans, are raising trans children or have ministered to the trans community. Unlike the arrogance of those transphobic Catholic leaders and politicians who falsely insist that the visibility of trans people signals a "new trend," the preface to this Catholic resource states plainly and accurately: "It is likely that transgender people have always existed, but several recent events have brought them and their experiences into the spotlight."

One might even look to my own recent work in theological anthropology, which demonstrates how there are other resources in the Catholic tradition and ways of thinking about human personhood that do not result in anti-transgender positions.

As politicians continue to spread transphobic messages, seeking to stoke fear in their constituents by scapegoating a community that is already tremendously vulnerable, church leaders need to stand in solidarity with our transgender siblings and their allies who have been advocating for basic civil rights.

It is also important to note that despite all the noise about so-called "gender ideology," there is no magisterial teaching on this subject. Bishops and other church leaders in the United States and abroad would do well to listen, learn and consult actual experts — especially transgender persons — before condemning something they clearly do not understand. Otherwise, whole groups of people will continue to be oppressed and more people will die.

A version of this story appeared in the May 28-June 10, 2021 print issue under the headline: Why the church should fight anti-transgender legislation.