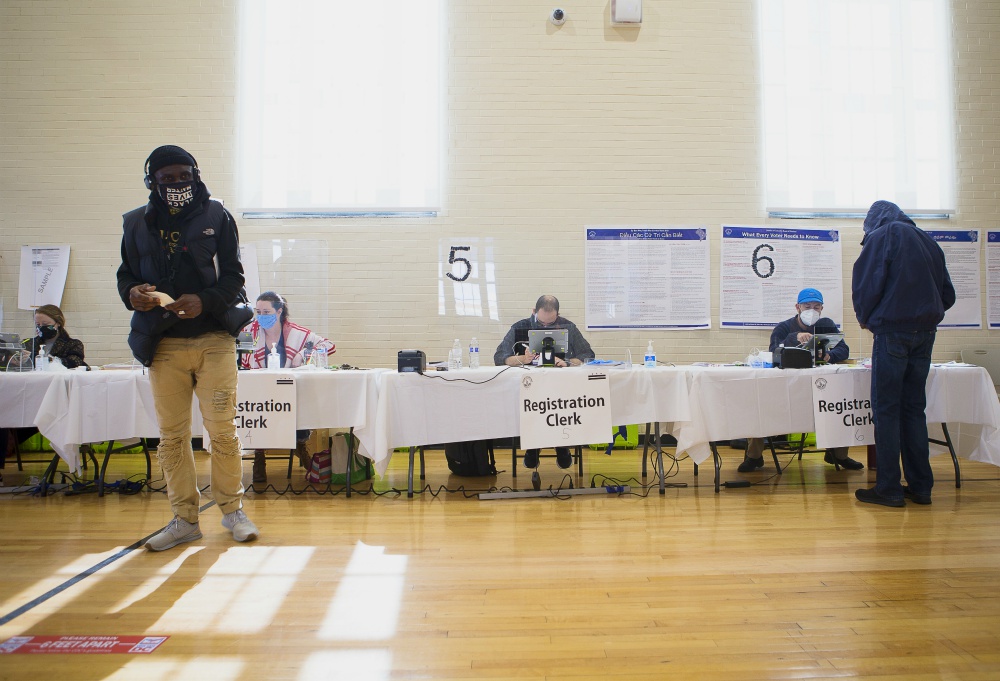 People check in to vote during the presidential election at Ida B. Wells Middle School in Washington Nov. 3. (CNS/Tyler Orsburn)

Editor's note: Like the rest of the country, we at the National Catholic Reporter have been intensely focused on the U.S. elections. The coronavirus pandemic, economic devastation and a political polarization that may even threaten the existence of our democracy have made it one of the most consequential elections in our lifetimes, if not in the history of the United States. But where do we — as a country and a church — go from here? We asked four of our columnists and one bishop to reflect on that question in essays that will run daily during election week. This is the fourth installment. Read previous commentary from Bishop John Stowe, Benedictine Sr. Joan Chittister and Franciscan Fr. Dan Horan.

I have been struggling to answer this question since editor Heidi Schlumpf first brought this question, and the subsequent series, to NCR editors last month.

I remembered the sadness and confusion I felt in 2016, and, regardless of who was elected, I wanted to try and be hopeful for our readers.

No matter the outcome of the election, 2020 has demonstrated the myriad ways American capitalism exploits marginalized communities, including depriving vulnerable populations of housing and adequate health care amid a global pandemic. As countless Americans have lost their loved ones, U.S. billionaires continue to make billions.

As Pope Francis mentions in Fratelli Tutti, we cannot be "a society that seeks prosperity but turns its back on suffering."

As an institutional church, we must use our faith to confront and challenge the violence inflicted upon our nation's most marginalized.

Last month alone, U.S. police officers shot and killed Jonathan Price in Texas, Fred Williams III in California, Marcellis Stinnette in Illinois and, most recently, Walter Wallace Jr., a 27-year-old Black father of seven. On Oct. 3, Felycya Harris, a 33-year-old Black transgender woman, was shot and killed in Augusta, Georgia. Her death is the 31st transgender death this year, which according to the Human Rights Campaign is the deadliest year for the American trans community since 2017.

Since the first coronavirus case was confirmed in the United States in January, more than 230,000 Americans have died; and in New York, the center of the pandemic here, more than 30,000 people have lost their lives.

Thousands have lost health insurance, jobs, savings and their homes. Along with being disproportionately affected by this pandemic, communities of color continue to face violence at the hands of armed police officers.

Violence against these communities has always existed in our nation. But in 2020, a year when both political parties have used our faith as campaign ploys, extremist violence is on the rise, and individual U.S. bishops have denigrated racial justice efforts, many BIPOC are wondering if we are truly safe in the Catholic Church.

We cannot move forward as a church and nation until we collectively mourn the countless American lives lost this year, including grappling with the ways capitalism has directly contributed to the various crises we are seeing this year.

The Catholic Church, as many BIPOC have written this year, must be a part of this public reckoning. This begins with the all-male, almost all-white body of Catholic leaders, the United States Conference of Catholic Bishops.

Francis has challenged these bishops to step outside of our institutional church's internalized whiteness. Last month, he appointed 13 new cardinals, including Archbishop Wilton Gregory. Gregory, one of just seven active Black bishops in the U.S. bishops' conference, will become a cardinal on Nov. 28. This year alone, Gregory has been one of the few bishops to publicly rebuke Donald Trump's weaponization of Christianity.

This year, when the public perception of our church as white has been most glaring, Francis has reminded white American Catholics that blackness, as Shannen Dee Williams states, is an integral part of our faith.

Gregory's appointment to cardinal is a reminder that Black Catholicism, and the traditions of all communities of color in America, is integral to our faith.

Yet as integral as Black personhood is to American Catholicism, including building some of the very institutions most loved in our church, this is not reflected in our church's hierarchy.

In order to move forward as a church and in order to set the example for the rest of the country, the American Catholic Church must more fully and authentically integrate BIPOC experiences into the institutional church.

One immediate way this can be done is for our church leaders to release a new and more urgent pastoral document on race than 2018's "Open Wide Our Hearts." The document can touch on issues Catholics of color have been calling on leaders to opine on this year, including the Black Lives Matter movement, white supremacy and abolition.

The Catholic Church must authentically and collectively align itself with movements fighting to dismantle the very economic system that led to more than 1 million deaths worldwide in less than a year.

And our bishops must, together, lead the way.

Next week, bishops will meet for their annual fall assembly, the first to be held virtually. As they gather following the election, I hope they take this opportunity to demonstrate the very courage Cardinal-elect Gregory showed when he publicly denounced Trump.

The U.S. bishops must be an ally in the fight toward liberation. I urge our church leaders to take this year's gathering as an opportunity to discuss what their allyship can be.

This is where our church must go from here.

This story appears in the Election 2020 feature series. View the full series.
A version of this story appeared in the Nov 13-26, 2020 print issue under the headline: We need a reckoning on race.