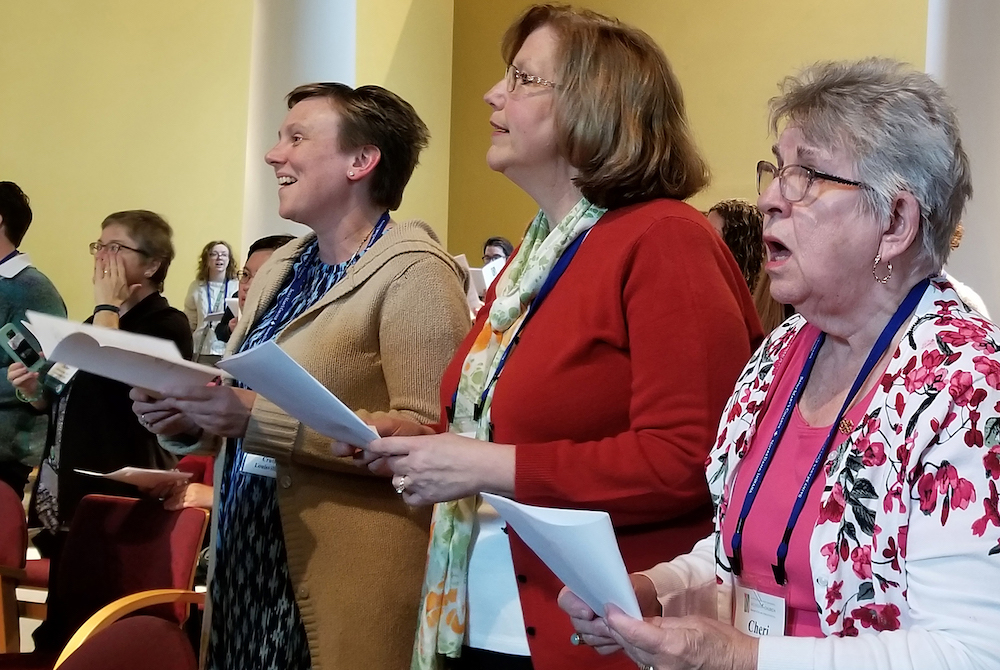 Women from the Archdiocese of Louisville, Kentucky, sing during Mass Oct. 19, 2019, at the Women of the Church Conference at St. Mary's College in Notre Dame, Indiana. Pictured are: Jane Cruthirds of Sacred Heart Academy; Janet Millen, who helped organize the 2016 Women of the Church Conference and a volunteer at St. Patrick Church; and Cheri Hall, who serves in prison ministry and is a deacon's wife. The conference drew about 150 women and a handful of men to discuss the leadership of women in the church. (CNS/The Record/Marnie McAllister)

Every Sunday at Communion time, I watch my fellow parishioners greet Sister K, who sits at the end of my pew. Almost everyone who passes on their way to the altar touches her shoulder or bends over for a hug and a kiss on the head or a shake of the hand. They know her, and, having worked in the neighborhood for decades, Sister K knows pretty much all of them. She can even tell you the names of their parents and grandparents, their cousins and nieces and nephews.  These largely African-American parishioners value what this white woman, less than 5 feet tall, has meant to them and their community.

Every now and then, Sister K is a lector at Mass. She leans on a cane to climb the lectern in order to read from the Old Testament or one of the epistles. Afterwards, she carefully makes her way down the stairs back to her pew. Only then does the congregation rise to hear the Gospel read by one of our deacons or by our pastor.

At our parish, as at most, women are busy getting things done. They prepare refreshments for social events and prepare the meal our church offers free to the neighborhood. They polish the pews every month. They teach the children. They make up the majority of our choir and even dance down the aisles as Mass begins. Though men work hard for our churches and make invaluable contributions, in virtually every parish, women carry a heavy load. Everyone knows this.

Yet Catholic women cannot serve as ordained ministers, as either deacons or priests. History teaches us that this was not always the case. In about 215 A.D., Hippolytus of Rome wrote "The Apostolic Tradition," which forbade the ordination of widows, which would imply that widows were being ordained in the two previous centuries. Why else would such a rule be necessary? Deaconesses appear to have been common in the early church, particularly in the Eastern Rite. But in the 5th century A.D., proscriptions against women deacons and priests began to appear.

In the early church, it seems, women filled leadership roles. Since Vatican II, we have resuscitated many traditions from that era, some of them described in the Acts of the Apostles. Women worked then, and they're doing the work, of teaching and serving, now. But over the years, the honors, the titles, and the most respected tasks have been revoked.

After Mass recently, someone asked our pastor a question she's often heard from her Protestant friends: Why all the standing up and sitting down at Mass? He explained, "Posture is very significant to us as Catholics. For example, we sit for the first two readings at Mass. Our standing up shows respect when the Gospel is read, because it consists of the actual words of Jesus."

The very next Sunday, when the Gospel was read, it struck me once again. That week, like every week, our children see women working and serving, dancing and singing. They learn when to stand up at Mass, and they learn to stay seated while Sister K and others read the first and second readings. When it's time for the Gospel, of course, we stand up, as our pastor explained, for the words of Jesus. When the male deacon steps up to the lectern to read those words, we all rise up out of our seats in respect. The symbolism cannot be lost on the children.

[Kathy Ewing has written for Belt, The Bark, Brevity, America, The Millions and other publications. She teaches Latin at Cleveland State University and has taught writing at Case Western Reserve University. She is the author of a memoir, Missing: Coming to Terms with a Borderline Mother (Red Giant Books, 2016), and Lead Me, Guide Me: The Life and Example of Father Dan Begin, which will be published this year by Shanti Arts.]