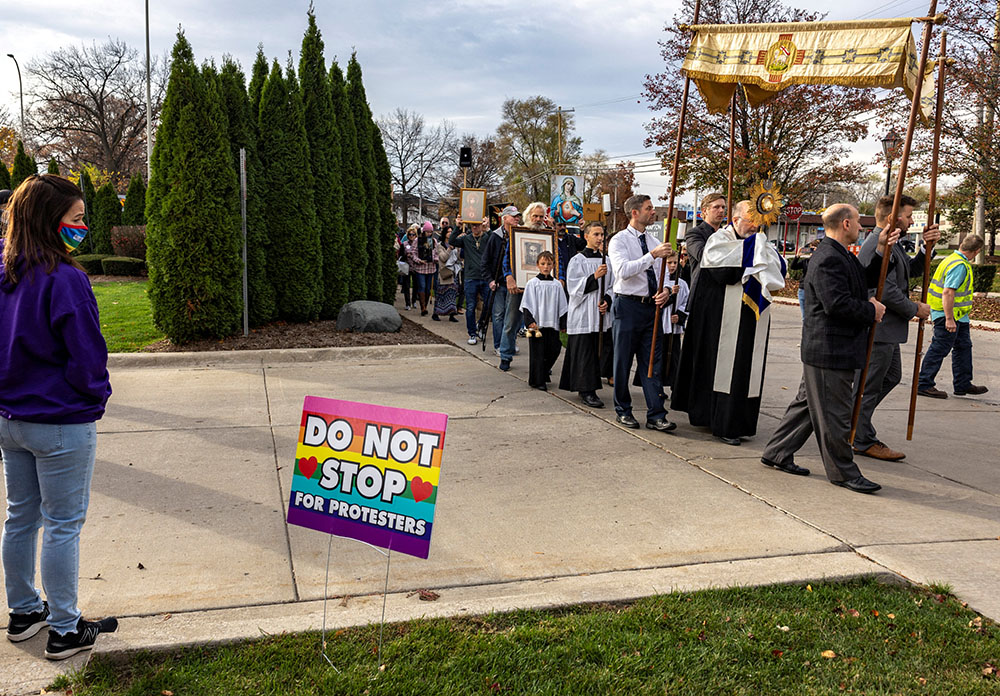 An abortion clinic escort watches a Catholic procession pass Northland Family Planning in Westland, Michigan, Nov. 5 to demonstrate against a ballot measure known as Proposal 3, which would codify a right to abortion. Michigan voters approved the measure in the Nov. 8 midterm election. (CNS/Reuters/Evelyn Hockstein)

Last week, ballot measures intending to restrict access to abortion were put to voters in eight states. The measures varied in their formulation, but all eight failed in both blue and red states. No matter how successful the pro-life movement may look since Dobbs, measured against what Catholic bishops have sought and said about abortion for 50 years, the results of those ballot measures affirm a longstanding pattern of failure.

It would be fair to say something snapped after the U.S. Supreme Court's 1973 decision in Roe v. Wade, transforming Catholics' relationship as believers with the world and reshaping American politics — but not for the better.

When the court struck down abortion restrictions across the United States and established a constitutionally protected right to procure an abortion at any point in a pregnancy's first trimester (scaling up protection for the unborn child while the pregnancy progressed), the U.S. bishops quickly settled on a strategy to seek a constitutional amendment that would reverse Roe. In those days, the bishops seemed to believe they only needed to make their case and Americans would respond, sharing Catholics' visceral revulsion toward abortion.

Catholic bishops never wavered in their overall objective. We find bishops in 1975 calling for "an end to permissive abortion" and seeking "legal protection for the right to life," an approach that persisted down to the 2019 "Faithful Citizenship" document that calls for "constitutional protection for the unborn."

Despite so much effort, roiling culture wars, and the bishops' certainty that Americans would come to realize that Roe was a mistake, public opinion has remained stubbornly fixed against making abortion illegal.

But a constitutional amendment never gained much traction — perhaps a signal that could have been heeded. Instead, the bishops were undaunted by that failure and settled into a more political approach that culminated with last summer's Dobbs v. Jackson decision that restored the pre-Roe status quo.

Dobbs has restored the question of abortion to the states, but it has given no constitutional protection to the unborn at all. Protections for the unborn now can vary from state to state as much as protections from segregation once did during the Jim Crow era.

In all these ways, Catholic pro-life activities amount to little other than 50 years of accumulating failure. Despite so much effort, roiling culture wars, and the bishops' certainty that Americans would come to realize that Roe was a mistake, public opinion has remained stubbornly fixed against making abortion illegal. Objectively, the bishops miscalculated about their ability to persuade other Americans from the start. And here, again, they ought to have known a long time ago.

For as much as Catholic bishops from Cardinal Joseph Bernardin of Chicago in 1984 to Archbishop Joseph Naumann of Kansas City, Kansas, in 2022 have insisted that abortion "is not a Catholic issue," but "an important societal issue" that only "coincides with religious beliefs," even other believers have not been convinced.

When Roe reached its 10th anniversary in 1983, an Episcopalian bishop likened restricting abortion access to "abridg[ing] freedom of religion," while a rabbi called legal restrictions on abortion access "oppressive theological punishment." Apart from Catholics and evangelicals, religious communities in the U.S. are far from aligned in search of a constitutional solution.

So many signs of failure piled up and were ignored. While bishops were ignoring those signs, they participated in the deepening divisions of our political life created by culture wars the bishops' political activities were fueling. So much fuel was heaped on that political fire that roughly half of Catholic voters fled to Donald Trump in order to reverse Roe — a feat achieved by manipulating Supreme Court nominations, endangering the status of other precedents in the court's case law and undermining considerable public confidence in our institutions of government.

For years, Catholic bishops have looked the other way about all sorts of things to keep the focus on abortion, and the damage now is considerable outside the church and within our sanctuaries.

Meanwhile, the Trump administration used division as a political tactic so effectively that its polarizing style frustrated a public health response to the pandemic, costing millions of lives, and eventually undermined broad public confidence in elections.

For years, Catholic bishops have looked the other way about all sorts of things to keep the focus on abortion, and the damage now is considerable outside the church and within our sanctuaries. Had there been any plausible reason why they should have expected success, maybe that even could be justified. But a long record of failure should have told the bishops they were going down the wrong path.

But there is yet one more failure to tally — the most jaw-dropping one of all. After everything that has happened, the U.S. bishops' Pro-Life Committee gave its support to a ban on abortions after 15 weeks that would permit 94% of the abortions that were legal under Roe. For all the damage done to reverse Roe, now the bishops accept almost all of it while still insisting that abortion rights are "radically out of step with the American public."

As they begin their fall meeting, I think we would be wrong to expect the bishops to reexamine their approach to abortion particularly, and to politics more generally. On abortion, so far our bishops have proven they can see only one direction to go: further.

But there are alternatives.

A more effective witness to justice and life in a political community like ours would begin by acknowledging that our opposition to abortion is not diluted when we accept that abortion can be legal. Accepting the law does not mean we accept what the law permits, and neither does it stifle us into silence about our moral position.

We still can try to sway public opinion. But those efforts only can be effective when we work to be seen by other citizens as credible and trustworthy partners. The divisions that Catholics have fostered and the damage that culture wars have inflicted on our public life undermine our claims to speak for the common good. The anemic replies of our bishops to #BlackLivesMatter and the Jan. 6 insurrection, and the absence of a strong statement against political violence after the attack on Paul Pelosi have not helped, either. People outside the church see that, and Catholics need to look hard at what we have sown with our opposition to abortion.

Rather, our preeminent priority should be the health of the body politic, the integrity of the political system and the Constitution itself. Promoting the health of a political system that helps people of different faiths (and no faith) work together toward the common good offers the only sure way to promote life and justice for all.

On the other hand, a political system fractured by division and undermined by polarization never will muster itself to defend anything because it reduces everything to a zero-sum contest of interests. That is what we have now, and it does not reflect a Catholic political vision.

Catholics need to encourage our bishops to see the matter that way. Until they do, we should not be surprised to see more failure pile up while our divisions deepen and worsen.