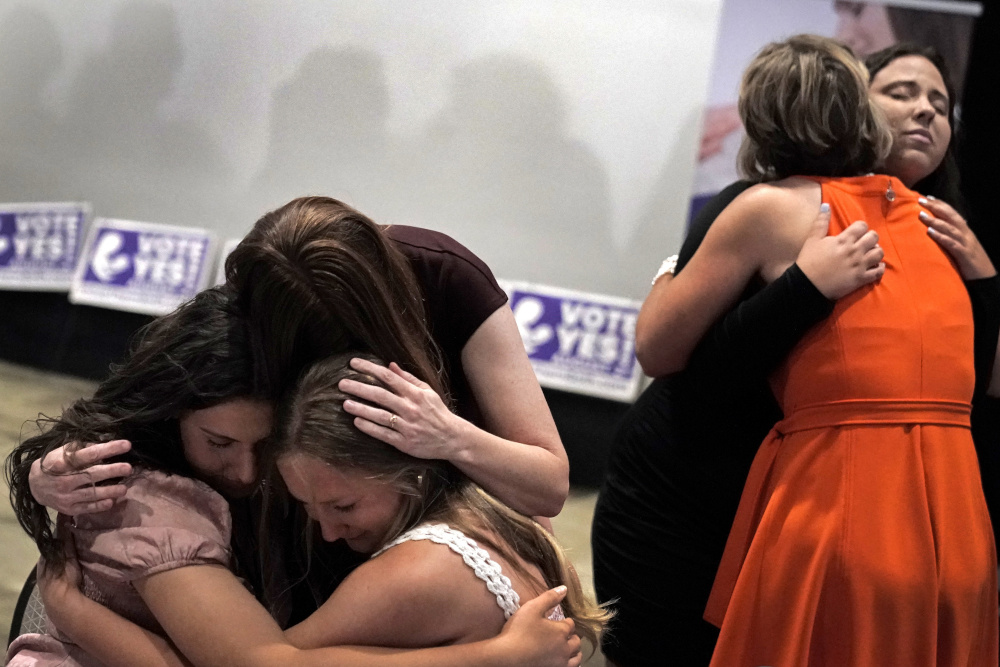 People hug during a "Value Them Both" watch party after a question involving a constitutional amendment removing abortion protections from the Kansas constitution failed Aug. 2 in Overland Park, Kansas. (AP/Charlie Riedel)

When the votes rolled in the night of Aug. 2 on a proposed amendment to the Kansas state constitution that would remove the explicit right to an abortion, what was expected to be a tight race was instead shockingly lopsided: The amendment was roundly defeated 59% to 41% — an 18-point spread.

Analysts were quick to frame the result as a setback for anti-abortion movement, but activists and experts say it also amounts to a rejection of the Catholic Church hierarchy, which had shelled out massive sums of money in support of the amendment's passage. The vote may hint, too, at mounting backlash against the church's involvement in the nation's abortion debate — not least among Catholics themselves.

In the wake of the vote, Archbishop Joseph Naumann of Kansas City, Kansas, who publicly supported the amendment's passage, issued a statement Aug. 3 lamenting its failure.

Naumann's own archdiocese and other Catholic organizations also spent millions, however, representing the single largest donor base for the pro-amendment umbrella group known as the "Value Them Both" campaign.

According to financial disclosures and media reports, the Kansas City Archdiocese spent roughly $2.45 million on the effort this year, with Catholic dioceses of Wichita and Salina together spending an additional $600,000 or more. Some individual Catholic parishes across the state chipped in, as did the Kansas Catholic Conference, an advocacy group tied to the state's bishops, which reportedly spent $100,000. Separately, the conservative advocacy group CatholicVote raised around $500,000 for the pro-amendment Do Right PAC, according to Flatland.

It remains to be seen which side raised or spent more money, although opponents of the amendment also enjoyed major donations from liberal groups such as NARAL Pro-Choice America and the American Civil Liberties Union. But these mostly secular groups didn't shy away from faith: In one advertisement broadcast to Kansans, a woman spoke about her opposition to the amendment from the perspective of a cradle Catholic.

"Growing up Catholic, we didn't talk about abortion," the woman says. "But now it's on the ballot, and we can no longer ignore it."

Read this next: What the church can learn from Kansas' vote to protect abortion rights

According to Natalia Imperatori-Lee, chair of the religious studies department at Manhattan College, the ad likely better represents the average Catholic's views than the campaigns funded by bishops. The church officially decries abortion, but U.S. Catholics, generally supportive of legal abortion, have only grown more liberal on the issue over time: According to a recent PRRI poll, the percentage of white Catholics who believe abortion should be legal in all or most cases jumped from 53% in October 2010 to 64% in June of this year. The shift among Hispanic Catholics was even more dramatic, from 51% in 2010 to 75% in June.

"The bishops have been so focused on the idol of abortion legislation that they have failed to step back and see the complication of criminalizing abortion and what that means — especially for vulnerable, nonwhite, nonwealthy communities," said Imperatori-Lee.

"If this is what the bishops are going to do, if this was their plan for a 'post-Roe' world, then Catholics are going to be very disappointed."

Chuck Weber, executive director of the Kansas Catholic Conference, defended his group's involvement with the Value Them Both campaign.

"I do not apologize one bit for our advocacy," he told Religion News Service in an interview.

Weber lamented heightened tensions triggered by the state's abortion debate (abortion rights demonstrators were threatened with arrest, and a Catholic church in Overland Park was defaced), but pointed out that bishops have lobbied for issues other than abortion in the past. The conference, he said, was among those who pushed state lawmakers this year to expand Medicaid coverage for new moms from two months to 12 months. Weber also suggested bishops would fund campaigns around similar issues if they were put up for a vote like the amendment referendum.

Even so, Weber acknowledged efforts to convey his group's broader agenda to everyday Catholics have fallen short.

"I need to do a better job of letting people know that the abortion question is not really the primary point of our advocacy at the state capitol or in Washington, D.C.," he said. 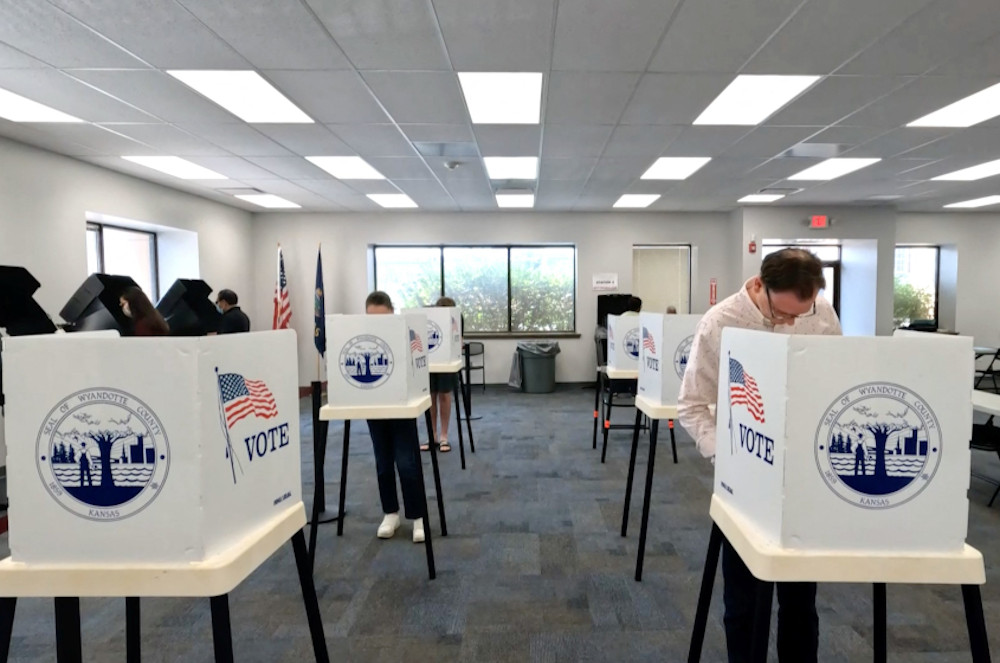 Voters mark their ballots during the primary election and abortion referendum at a Wyandotte County polling station in Kansas City, Kansas, Aug. 2. Voters rejected a ballot referendum that would have added language to the state constitution to say there is no constitutional right to abortion in Kansas. (CNS/Reuters/Eric Cox)

One organization that financially skipped the Kansas amendment battle was Catholics for Choice, which advocates for abortion access. The group did not spend money in Kansas in part because, according to Catholics for Choice's leader Jamie Manson, it didn't need to.

"The vote in Kansas yesterday shows us the power of pro-choice people of faith when up against the power, money, and influence of the Catholic hierarchy," Manson said in a statement.

She added: "I am looking forward to more David vs. Goliath victories ahead."

The underdog spirit in the Kansas fight was embodied by two Catholic nuns who penned an anti-amendment letter published in the lead-up to the vote that amounted to an act of defiance against local bishops.

"A church sign said, 'Jesus trusted women. We do too,'" read the nuns' letter. The sisters went on to bemoan the harm caused by restrictive abortion bans passed in other states and noted that supporters of the amendment have primarily focused resources on banning abortion and not legislation that would assist mothers who bring children to term, such as "healthcare, parental leave, Medicaid and other support for poor women."

Kathleen Sebelius, a Catholic and former Kansas governor who served as secretary of Health and Human Services under former President Barack Obama, lauded the nuns' letter, calling the sisters "courageous." Whether or not it had a broad impact, Sebelius told Religion News Service, it reminded her of when nuns spoke out in favor of the Affordable Care Act in 2010, which countered the U.S. Conference of Catholic Bishops' opposition to the bill and is credited with paving the way for its final passage.

"I saw the nun statement in the Affordable Care Act change minds of members of Congress in spite of the bishop's statement urging people to vote no," said Sebelius. "I have no doubt at all that the nuns' statement in Kansas made a difference to women who follow what the church has been saying and what they had been promoting — and listened to the nuns instead."

The Kansas vote suggests the bishops, having won a long-awaited victory at the Supreme Court in the overturning of Roe v. Wade in June, may now be fighting uphill battles in many states, with uneven support from a rank-and-file who would rather see them invest church money in other places.

"That money could do a lot of good — diapers and formula," said Imperatori-Lee.