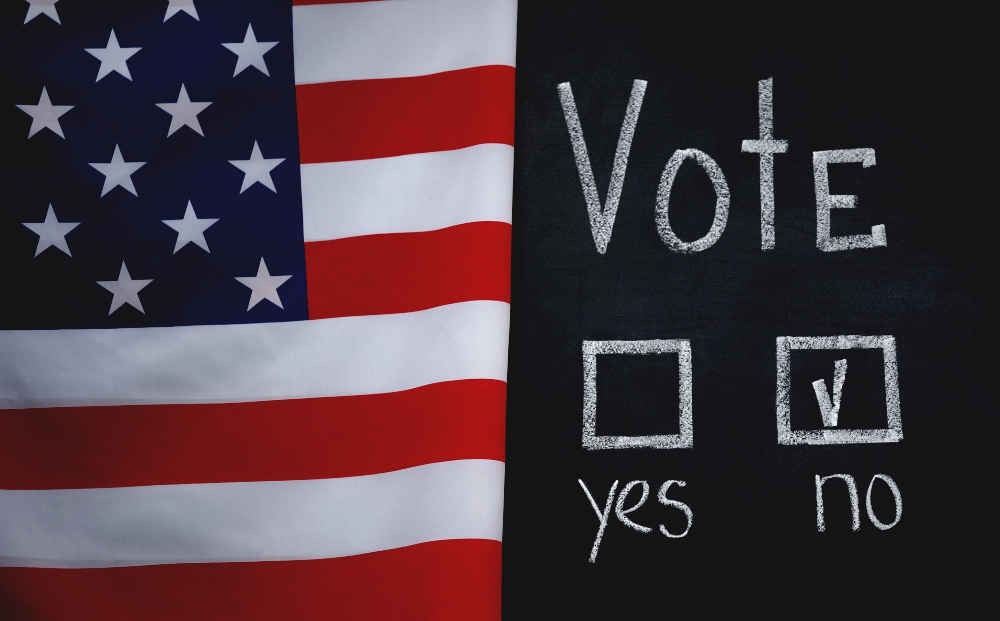 "Show up and vote," Joe Biden exhorted us during the first debate Sept. 29. "Vote. Vote. Vote." His running mate, Sen. Kamala Harris, agrees and explains this is "the most important election in our lifetime."

As much as I admire and appreciate the passion of Biden and Harris, I won't be voting for them — nor anyone else up for grabs on one ballot or another. I've never voted in any election, going back to the days when John F. Kennedy and Richard Nixon were offering their services to the country.

The problem, for a start, is the Constitution: Article 1, Section 8 and Article 2, Section 2. The Founding Fathers ruled that the president "shall be commander of the Army and Navy" and Congress shall pay for it. The good old boys who wrote the Constitution weren't exactly champions of voting, with only white male property owners allowed to cast ballots. Office holders were required to take an oath to "preserve, protect and defend" the Constitution, a document sanctioning military violence — right to the present in Afghanistan — at 19 years, the longest war in U.S. history.

On April 4, 1967, in a sermon in New York's Riverside Church, Martin Luther King Jr. judged "the greatest purveyor of violence in the world today [is] my own government."

And: "A nation that continues year after year to spend more money on military defense than on programs of social uplift is approaching spiritual death."

Voting in elections means giving one's personal power to someone else who acts on the notion that he or she will represent you in the halls of Congress or the White House. Vote and make your voice heard, goes the pseudo-patriotic bromide — except no guarantee assures that any politician is listening and heeding.

Participatory democracy is what pacifist-anarchists like Day practiced, not representational democracy. Participate in whatever action moves your conscience as long as it works to reduce violence and increase peace — not waiting for a passed law to do it.

John Loughery, co-author of the recent book Dorothy Day: Dissenting Voice of the American Century, told an interviewer that Day "didn't believe that voting for one party or another would make a significant difference in the ways that mattered to her. (Rather like Gore Vidal, who always insisted there was only one party in the U.S., the Party of Property, which had two wings, the Democratic and the Republican, she thought the differences between candidates tended to be negligible.)"

A cynic would add: If voting could change things, they'd make it illegal.

This thinking brings to mind the anti-voting stand taken by the sociologist W.E.B. Du Bois. Shortly before the 1956 election in which the major candidates were the Republican Dwight Eisenhower and Democrat Adlai Stevenson, he wrote in The Nation magazine: ""I shall not go to the polls. I have not registered. I believe that democracy has so far disappeared in the United States that no 'two evils' exist. There is but one evil party with two names, and it will be elected despite all I can do or say."

During an election season a few years ago, Olivia Katz, a former star student in my Peace and Justice class at American University, wrote to say that one of her other teachers argued that "those who don't vote give away their power and waste that opportunity. ... I'm not sure. I voted this year but I wasn't initially planning on it. I eventually gave in and voted because I guess I thought maybe my vote could change things and I should not throw away the opportunity." And then: "Did you vote, if you don't mind me asking?"

I didn't mind. Instead, I cherished Olivia's honesty. I wrote back in part:

Your professor who urged her students to vote is keeping alive the illusion that voting in elections can improve things. You have to wonder then, when is all this betterment going to kick in? ... I've seen no evidence that voting has done much to save the 21,000 people around the world who die every day from hunger. I've seen no evidence that voting makes the voter a kinder person or improves the character of the elected. ... As a pacifist, it is only in political elections that I decline to vote. I vote every weekday to get up at 6 am to teach my high school classes on nonviolence. I vote every day to buy healthy and cruelty-free food. I vote everyday to commute by bicycle. I vote every day to spend time with my family. I vote every day to buy products that do no harm to the environment. To my mind, that's true voting power — occurring every day — that has nothing to do with electoral politics which involves passively pulling a lever a few seconds every four years. I know that my non-voting views put me in the same holding pen reserved for heretics and deviants, but the heresy and deviancy we should be wary of is the belief that no alternatives to violence exists.

Pacifism rarely gets good press. It is mistakenly dismissed as passivity, even as such pacifists as Joan Baez, Arthur Laffin, Elizabeth McAlister, Alice Walker, Daniel Berrigan, Emily Balch, Jeannette Rankin, Abraham Heschel, the Kings Bay Plowshares 7 and a sturdy list of others who were anything but passive as they rallied and defied one war machine or another and were often imprisoned for their civil disobedience.

Few have made a better case for the moral force of nonviolent anarchism, both as a political tactic and a personal creed, than Randall Amster. He is the former director of the Peace and Justice Studies Association and currently teaches at Georgetown University, where I came to know him well as a fellow traveler. In a 2010 essay for the nonprofit Waging Nonviolence, he wrote:

Interestingly, this plays right into the hands of the caricature of anarchism as violent, bomb-throwing, chaotic behavior that seems to be the first question one gets asked when their anarchism is presented in mixed company. Indeed, I always enjoy getting that inevitable query: "Isn't anarchism just violence and destruction?" To which I usually reply: "How many people would you estimate have been killed by anarchists in the last hundred years? Now, how many would you say have been killed by liberals, or conservatives, in that time frame? If a lawyer or corporate manager were here before you now, would you ask about the blood on their hands or just let it slide as part of business as usual? The state didn't save us from the violence of anarchy — it simply monopolized it, institutionalized it, and expanded its role in our lives." ...

To wit: the state (including its corporate underwriters and beneficiaries) is inherently violent both overtly and structurally; anarchists above all reject the state and thus would do well to highlight the fundamental contrast.

With the Nov. 3 election date approaching, many believe democracy itself is under siege. The voices range from Barack Obama at the Democratic convention — democracy is "threatened like never before" — to Gold Star father Khizr Khan, whose soldier son was killed in Iraq — "Trump may damage American democracy permanently."

Much of the damage comes when Donald Trump sows doubt, with scant evidence, that mail-in voting is routinely fraudulently counted.

Confusion and distrust are growing about the honesty and accuracy about the final outcome. When asked by Fox News' Chris Wallace whether he would honor election results if he lost, Trump replied: "I have to see… No, I'm not going to just say yes. I'm not going to say no, and I didn't last time either."

If Trump goes down in defeat, does anyone doubt that he'll bellow his favorite word still again? Hoax. Bet on it.