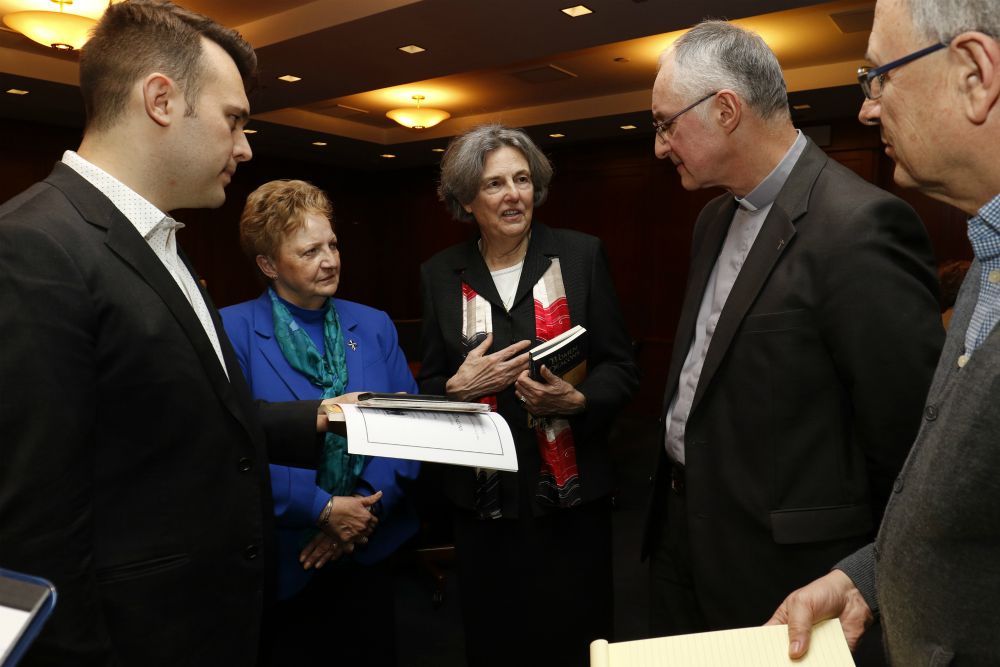 Catholic scholar and author Phyllis Zagano is flanked by Dominican Sr. Donna Ciangio and Jesuit Fr. Bernard Pottier as she speaks with journalists prior to a Jan. 15 symposium on the history and future of women deacons in the Catholic Church. Held at Fordham University's Lincoln Center campus in New York City, the event was hosted by the Fordham Center on Religion and Culture. (CNS/Gregory A. Shemitz)

Will he or won't he?

That's the question being asked in some circles as the date approaches for the pope's appearance at this year's May 6-10 meeting of the International Union of Superiors General (UISG), the leaders of the world's congregations of Catholic women religious.

Every three years the group meets in Rome, and during the last gathering, in answer to a question from the group, Pope Francis agreed that it would be good to appoint a commission to study the history of women deacons.

The commission was formed within three months, in August 2016, and last summer, having completed its work, the commission sent a paper to the pope. So the big question this year is: What's Francis going to say about women deacons?

One of the appointed members of the commission is Phyllis Zagano, who writes a column that appears monthly on these pages. Zagano is one of those people who has a CV that makes one wonder if she was born with an earned Ph.D. and got on with life from there. She actually did it the hard way. Her bachelor's degree is from Marymount College in Tarrytown, New York. She has master's degrees in public relations from Boston University, in English from Long Island University, in theology from St. John's University and a doctorate in religion and literature from State University of New York at Stony Brook.

She is senior research associate-in-residence and adjunct professor of religion at Hofstra University. Visit her page on the Hofstra website and gain access to her talks, all of her publications, the titles of the books she has written and edited (more than 20), her columns beginning with the years she wrote for Religion News Service, and a link to the ones she has done monthly, since 2010, for NCR.

Her travel schedule since the commission completed its work last summer has been frenetic, a whirlwind lecture tour about women and the diaconate. There is arguably no single force more responsible for elevating the issue of women deacons and advocating the cause than Phyllis Zagano.

I caught up with her at the end of March at Holy Trinity Parish in the Washington, D.C., neighborhood of Georgetown, where she delivered a version of the 5,700-word talk that she had given during a packed-hall appearance just a week before at the Los Angeles Religious Education Congress. (See the video of that event here.) It is not unusual for inspirational speakers in the Catholic universe to attract big crowds. But Zagano's audiences hear page after page of precision, the kind of serious, meticulously documented research that is the product of years of work. A friend who also attended said afterward that she felt as if she'd been given homework for the next year — and she meant it as a compliment.

Amid all the serious content, Zagano's got the comedic timing of a polished performer and lots of material to work with as she scrolls through the words of popes and bishops and the endless ways in which they expressed how they despised women, did not want them touching sacred vessels, were abhorred that women should be present on the altar. And there's the tale of her arrival at Casa Santa Marta (where the pope lives and where she stayed for long stretches during her work for the commission) for the first time and finding out that she had been listed on the registry as "Monsignor Zagano."

Speaking of the upcoming meeting, she said, "I don't know what will happen. But, boy, if I were the pope, I wouldn't want to walk into a room with a thousand nuns and not answer the question." There are "tea leaves" that give some indication. First, if silence gives consent, the pope may be headed in the "yes" direction on the question of women deacons. No one has heard any dissent. And, in fact, a yes on the question at this point would simply be a step beyond what has already been determined. Previous Vatican and theological commissions who have considered the question, said Zagano, "haven't said no, they just haven't said yes."

The reason they haven't said "no," in Zagano's view, is the preponderance of evidence that exists showing that women deacons, no different in their ordination from men, were clearly a part of the church from its earliest stages through about the 12th century. Spoiler alert, but here's the conclusion of that long talk: First, "women can, and do, image Christ." And:

The overwhelming amount of literary, epigraphical and historical evidence regarding women deacons indicates there are even more facts about them, especially more ordination liturgies, either undiscovered or permanently lost, but we do know that they existed. We do know they were ordained by bishops and that they served these bishops in ministerial capacities. I think both the church and the world are progressively affirming that woman are made in the image and likeness of God. It would seem then, that it is entirely possible that nothing restricts women from diaconal ordination.

She also sees a possible indication in the lineamenta or questionnaire sent out ahead of this fall's synod on the Amazon. It contains a query about "official ministry for women." She said that use of the phrase "official ministry" can only mean ordination. Whatever the decision, she said she has emphasized with officials close to the pope that he "can't kick this can down the road any longer. He just can't."

Circle your calendar. The schedule at the moment has the pope attending the meeting on May 10.

Ever wonder what a reporter might be thinking when covering anti-LGBT hatred in a church setting in Southern California? Or how Michael Sean Winters manages three original columns and two columns of links with commentary every week? Or why we've been covering the money trails around the U.S. Catholic landscape? Or what Benedictine Sr. Joan Chittister has to say about humility beyond her columns that appear in NCR?

The readers who have clicked "yes" on the pop-up that asks if you want to become an NCR Forward Member have had the opportunity to get deeper into the NCR story with weekly letters from editors and writers explaining some of that back story, with invitations to meet writers and editors covering an event in their area and, most recently, by a look in on a video conversation I had with Chittister about her series. Because it was a first of its kind (there are a few technical glitches in the first few minutes, but hang in there) we're now making it available to everyone.

We'll be doing more of these in the future — and, as you'll hear — Chittister has agreed to return for a final chat on the series and much more. Have a listen. And consider becoming a member the next time the question pops up — and get deeper into the NCR conversation.

A version of this story appeared in the May 3-16, 2019 print issue under the headline: We await the decision about women deacons.