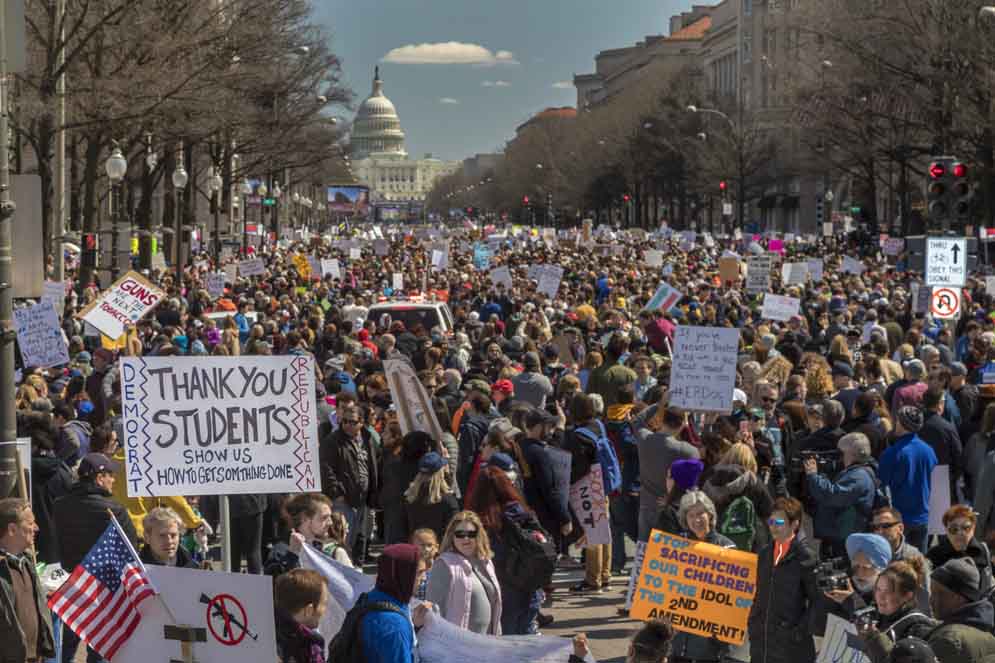 People gather near the U.S. Capitol during the March for Our Lives event March 24 in Washington. (CNS/Jim West)

As an old man, I have a constitutional right to wax poetic over "the good old days." I'm allowed to tell you how I had to walk five miles to school every day through the snow and rain. (Actually, I did walk one mile to high school every day.) I'm also permitted to tell you that kids today are just no good.

On a more serious note, I have harbored some concerns about young people for some time. It seemed to this old man that the emphasis on technology was at least somewhat harmful to our younger generation. Watching young people of every age immersed in their cell phones and video games made me wonder about their ability to interact with live individuals. I had trouble understanding why they would text their friends rather than pick up a phone and call them. The art of conversation seemed a lost cause. I particularly began to doubt they would have the ability to communicate appropriately and effectively with adults.

Well, even old men can be wrong once in a while. Saturday, March 24 marked the March for Our Lives on Washington, as well as marches across the country and the world for an end to shootings in our schools.

How did we get to this point? Almost immediately after the shooting in Parkland, Florida, students started speaking out. They were articulate, thoughtful, passionate, sad and afraid.

As they continued to speak out they were challenged, and in some cases ridiculed by the gun lobby and politicians. Their ability to respond to these challenges with maturity and common sense put the adults to shame. I have been overwhelmed at how they have been able to conduct themselves in a way that belies their age.

They have spoken at rallies and have done interviews on network and cable television. You expect them to sound like a football player who scored the winning touchdown after a big game. Instead, they sound like a TV savvy politician addressing a major political issue.

Also, it is not just a few handpicked students who are in front speaking out. Every time you turn on the TV you see a different student making sense and speaking with conviction. Moreover, the news media randomly picks out a student in the crowd for reactions, and the student begins talking as if he or she has been doing this kind of public speaking for years.

Part of it is the gravity of the situation. These students feel compelled to speak out. I saw one sign in a crowd of students that said: "Fix this before I text my mom from under a desk." The existential threat is palpable and was perhaps brought home once again by a shooting in a Maryland school that left one girl dead.

Of course, we don't know how long this momentum will last, but students have organized and put together an enormous demonstration, along with satellite demonstrations in cities across the country. They are registering young people to vote, which should have a dramatic impact on the November election.

It is true they have adults helping them with some aspects of the movement, but adults are not speaking for them. Young people are telling their stories and expressing their concerns in a profound way, and I believe our country may never be the same again.

Crowd estimates are that about 800,000 parents, students, teachers, and concerned citizens marched in Washington on Saturday. I believe this is a movement that cannot be denied, and we have teenagers to thank for it.

It appears we are in good hands with this new generation. Frankly, they can't take over for us old fogeys soon enough.