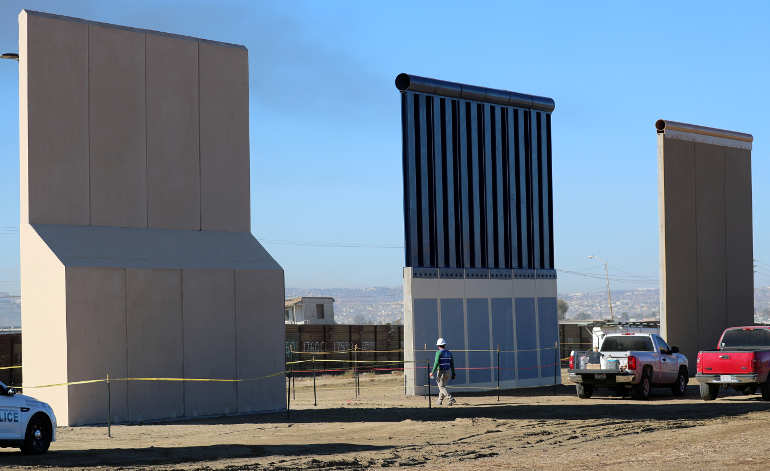 What will President U.S. President Donald Trump say about immigration and The Wall during tonight's state of the union address? Pictured are three of Trump's eight border wall prototypes in 2017 along the U.S.- Mexico border in San Diego. (CNS photo/Mike Blake, Reuters)

Will you be watching the State of the Union address tonight? Michael Sean Winters will have a full evaluation of President Trump's performance tomorrow morning. Until then, a couple of things for you to chew on:

For those of you looking for the rebuttals, look for:

This is Catholic Schools Week and we have a few stories to offer on that theme this week:

The Russia Probe: As prosecutors seek an interview with President Trump, his Republican allies in Congress are trying to raise doubts about the inquiry. 6 things to know about the fight over Rep. Devin Nunes' secret memo

Chile court clears ex-bishop of sex crime charges A Chilean appeals court ruled Jan. 26 there wasn’t enough evidence of a crime committed by the Rev. Marco Antonio Ordenes Fernandez, who resigned as bishop of the far-northern city of Iquique in 2012.

This month, Global Sisters Report The Life panelists consider discuss how the unique charisms of their particular congregations are reflected in their individual ministries. Being "neighbor." Preaching truth. Accompanying. Practicing radical hospitality. Proclaiming the Word. Engaging in ministries of leadership or education.

Canberra, Australia -- The government wants lobbyists and representatives of foreign governments to be listed on a new register as part of its push to crack down on espionage and political interference. The Aussie Catholic bishops say the law is so broadly written that priests and religious would have to register as agents of the Vatican.

Two takes on this one: Vatican, eager for China ties, asks 'underground' bishops to step aside And read: Cardinal Joseph Zen, the outspoken 86-year-old former bishop of Hong Kong, says Vatican is 'selling out' Catholic Church to China