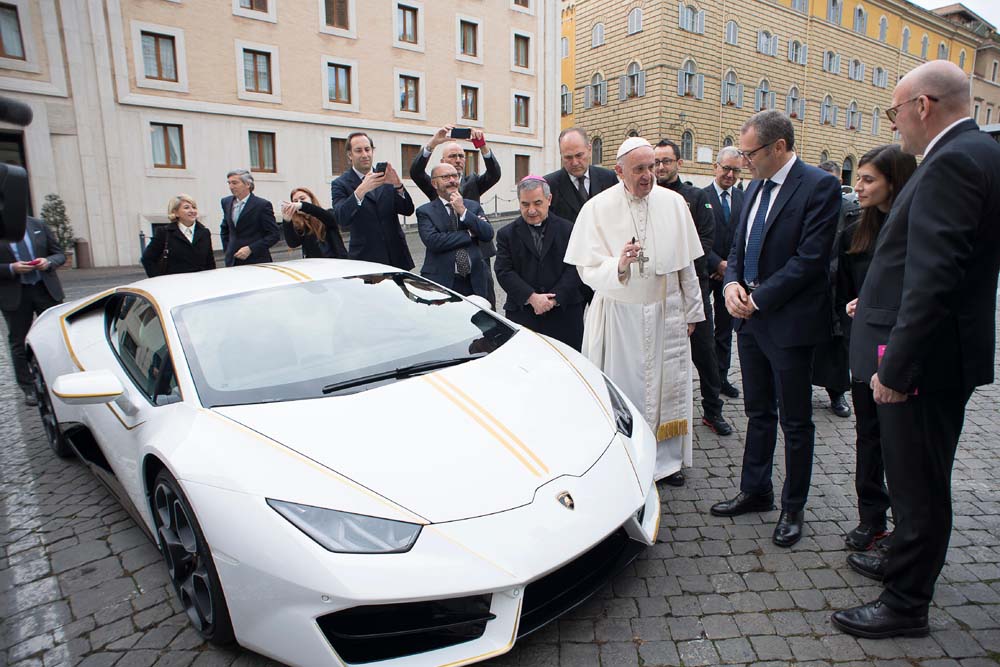 Pope Francis holds a pen as he prepares to autograph a Lamborghini presented by representatives of the Italian automaker at the Vatican Nov. 15. The car will be a auctioned and the proceeds given to charity. (CNS/L'Osservatore Romano)

Welcome to the Rome-centric version of your weekly international edition of the daily briefing, where we highlight the most recent news out of or about the Vatican.

First, from NCR's coverage from the U.S. bishops' annual meeting in Baltimore, held earlier this week:

The bishops broke tradition in selecting the leader of their Pro-Life Activities Committee, choosing Kansas City, Kan., Archbishop Joseph Naumann over Chicago Cardinal Blase Cupich. A cardinal had led the committee since the 1980s. The vote is being seen as an indication of the U.S. bishops' support of Pope Francis, who appointed Cupich to Chicago and added him to the College of Cardinals.

The bishops also decided to create a document and pastoral plan on marriage and family life, following up on Francis' 2016 apostolic exhortation Amoris Laetitia. But the new document isn't expected until 2019, and will also focus on the 50th anniversary of Pope Paul VI's 1968 encyclical Humanae Vitae, which reaffirmed the church's ban on birth control.

Now, back to the Vatican:

Pope Francis was given a new set of wheels Nov. 15: a Lamborghini Huracan decked out in papal colors of white and gold. But the pontiff won't be cruising the Vatican gardens. The car is headed to auction, and the proceeds will be given to charity.

Cardinal Gerhard Muller, the former head of the Congregation for the Doctrine of the Faith, has expressed disagreement with Pope Francis new motu proprio Magnum Principium, which decentralizes most authority for Catholic liturgical translations from the Vatican to local bishops' conferences. "The final authority in case of doubt cannot lie with the bishops’ conferences," Muller told a German paper.

Last week, Pope Francis denounced the continuing possession of nuclear weapons by various world governments, in what appeared to be a departure from the Roman Catholic Church's prior acceptance of the Cold War-era global system of nuclear deterrence and mutually assured destruction. The "very possession" of nuclear weapons is to be "firmly condemned," he said.

Pope Francis is reported to be considering a visit to a prison during his expected trip to Ireland in August 2018 for the World Meeting of Families. Archbishop Diarmuid Martin said the pope also wants to focus on visiting Ireland's poorer communities.