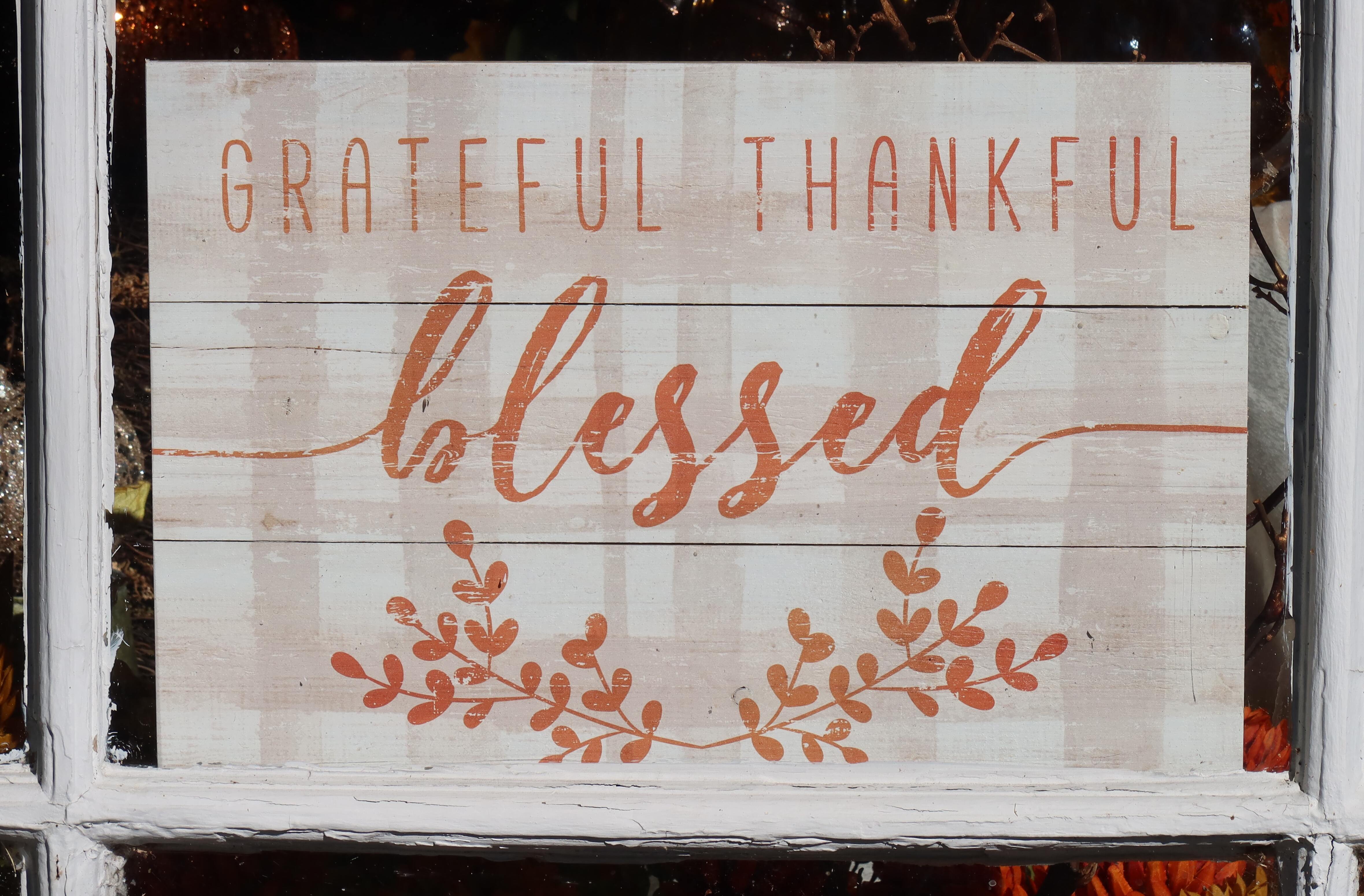 Tomorrow is Thanksgiving Day, a time when we in the land of the self-made man pause to recall that some things are given, that not every accomplishment is of our own making, and we render thanks for those aspects of life to which we still affix the word "blessing." Alas, the challenge for the Christian is to affix that word to the whole of life, and not just on one Thursday in November.

Our Catholic understanding of the significance of gratitude is rooted in the Scriptures and the church fathers both. In the readings for the day, we pray with the psalmist:

Let all your works give you thanks, O LORD,
and let your faithful ones bless you.
Let them discourse of the glory of your Kingdom
and speak of your might.

The epistle comes from the magnificent opening of St. Paul's letter to the Corinthians, which, like all Paul's letters except Galatians, begins with a prayer of thanksgiving:

I give thanks to my God always on your account
for the grace of God bestowed on you in Christ Jesus,
that in him you were enriched in every way,
with all discourse and all knowledge,
as the testimony to Christ was confirmed among you,
so that you are not lacking in any spiritual gift
as you wait for the revelation of our Lord Jesus Christ.

Gratitude orients us properly to our Creator.

St. Augustine, in his sixth sermon on the New Testament, preached, "When you say, 'Give us this day our daily bread,' you profess yourself to be God's beggar. But be not ashamed at this; how rich soever any man be on earth, he is still God's beggar." Gratitude puts us in our place in relation to the Creator – and, consequently, to creation.

Christianity imparts a worldview from which ethical teachings are derived, and that worldview should be dripping, maybe even drowning, in attentiveness to grace and gratitude.

Somehow this priority of gratitude as the necessary, first stance of the Christian got obscured over time. In our Catholic tradition, while Catholic cultures continued to bear witness to the priority of gratitude in a variety of ways, gratitude did not really figure into our moral teachings in the modern era. Those teachings, rooted in the natural law, increasingly saw grace as an add-on, the whipped cream on the sundae, not as the essential starting point.

The ressourcement theologians at the Second Vatican Council retrieved the patristic ideas of grace and gratitude, and applied them conspicuously to Christian anthropology, but they did not yet extend those insights to our social teaching. Pope John Paul II extended this line of thinking, partially extending it to our social teaching via the bank shot of anthropology, but not directly.

It was Joseph Ratzinger, Pope Benedict XVI, who forcefully introduced the idea of gratitude into our social teaching. In Caritas in Veritate, Pope Benedict noted that "it should be stressed that progress of a merely economic and technological kind is insufficient" (emphasis in original). He went on to affirm that:

Gratuitousness is present in our lives in many different forms, which often go unrecognized because of a purely consumerist and utilitarian view of life. The human being is made for gift, which expresses and makes present his transcendent dimension. Sometimes modern man is wrongly convinced that he is the sole author of himself, his life and society. This is a presumption that follows from being selfishly closed in upon himself, and it is a consequence — to express it in faith terms — of original sin (emphasis in original).

The Church's social doctrine holds that authentically human social relationships of friendship, solidarity and reciprocity can also be conducted within economic activity, and not only outside it or "after" it. The economic sphere is neither ethically neutral, nor inherently inhuman and opposed to society. It is part and parcel of human activity and precisely because it is human, it must be structured and governed in an ethical manner. ... in commercial relationships the principle of gratuitousness and the logic of gift as an expression of fraternity can and must find their place within normal economic activity.

Here is the most profound challenge to the premises of laissez-faire capitalism in all of Catholic social teaching. Against the cultural imperatives to compete and to pursue self-interest, the pope placed the Gospel imperative of gratitude and gift as a bulwark against hubris. He did more than that. He saw grace and gratitude as a means of avoiding human diminishment by means of that most ancient method of the evil one, self-assertion. Originally, in the garden, it was the fruit of the tree of knowledge that caused the fall of the First Man. Today it is the profit margin or the stock price or the corner office with Adam's successors. The evil is the same.

Theologians are still wrestling with Pope Benedict's insight. Pope Francis is clearly building on it as he, too, seeks to ground our Catholic ethical tradition in the rich soil of revelation, not merely in natural law thinking. Groups as diverse as the Francesco Collaborative and Communion and Liberation in its New York Encounter wrestle with this insight.

Take almost any issue, and you will find ethicists who can argue one way or another about the moral permissibility of a particular action. But Christianity imparts a worldview from which ethical teachings are derived, not the other way round, and that worldview should be dripping, maybe even drowning, in attentiveness to grace and gratitude. Human life is a gift, which is why the Christian is called to defend it against all threats. Being created in the image and likeness of God, human life is dignified, which is why the Christian is called to champion human dignity and confront all that cheapens it. All life is created by God, not made by us, so we cannot simply exploit it or toss it aside as we can something we have manufactured ourselves. We must treat each other and the world we share like the precious gift that it is.

The other day, I saw a photo of Pope Benedict. He looked impossibly frail. This Thanksgiving let's be grateful for his forceful, consequential introduction of gratitude into the heart of our social teaching. And, while enjoying a meal we did make, let's remember who gives us our daily bread. Let's welcome the grace to see ourselves as God's beggars.