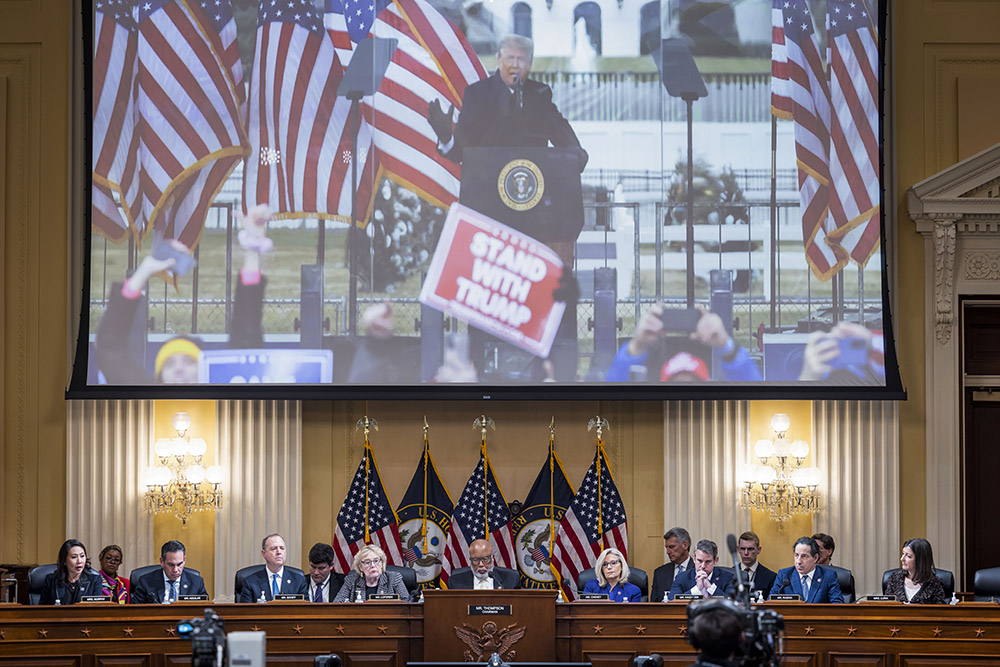 A video of former President Donald Trump is shown on a screen, as the House select committee investigating the Jan. 6 attack on the U.S. Capitol holds its final meeting on Capitol Hill in Washington Dec. 19. (Jim Lo Scalzo, Pool Photo via AP)

The House Select Committee to Investigate the January 6th Attack on the U.S. Capitol has issued its final report, making criminal referrals to the Department of Justice and providing a wealth of evidence to support what we all suspected while the attack was unfolding: The attack was not an accident. It was an attempted insurrection.

No one knows what the Justice Department will do. It already has its own investigation that was turned over to Independent Counsel Jack Smith in November, shortly after former President Donald Trump announced his candidacy for the presidency in 2024.

The legal danger in attempting to prosecute Trump is the same today as it was when the Congress impeached him. It is difficult to imagine a jury of 12 people without one Trump supporter who will ignore the evidence and vote to acquit. And Trump will turn any acquittal into an exoneration.

The moral danger in not prosecuting Trump is equally compelling. The idea that anyone is above the law is abhorrent to democracy, and refusing to prosecute Trump for his evident crimes affirms that idea.

Only in 2022 have we learned the steep price the country paid for the precedent Gerald Ford set by pardoning Richard Nixon, thinking it was more important to "move on" than to demand a reckoning, to short circuit justice in the interests of civil peace. Such moral judgments require a great deal of prudence, to be sure, and many of us thought Ford made the right decision because we assumed Nixon was an aberration. We were wrong and so was Ford.

Trump has all of Nixon's disdain for democratic norms, but the Select Committee's evidence shows he was willing to countenance violence in a way that is truly shocking. "Knowing that violence was underway at the Capitol, and despite his duty to ensure that the laws are faithfully executed, Donald Trump refused repeated requests over a multiple hour period that he instruct his violent supporters to disperse and leave the Capitol, and instead watched the violent attack unfold on television," the summary report concludes. "This failure to act perpetuated the violence at the Capitol and obstructed Congress's proceeding to count electoral votes."

It is chilling to read the testimony of the Proud Boys and the Oath Keepers, right-wing vigilantes who came to Washington at Trump's bidding on that fateful day in 2021. It is still chilling to re-read the tweet Trump sent out while the mob attack was in full swing, calling Vice President Mike Pence a coward.

What was new to me was this about longtime Trump aide Hope Hicks:

Hope Hicks texted Trump Campaign spokesperson Hogan Gidley in the midst of the January 6th violence, explaining that she had "suggested ... several times" on the preceding days (January 4th and January 5th) that President Trump publicly state that January 6th must remain peaceful and that he had refused her advice to do so. Her recollection was that [Trump White House lawyer Eric] Herschmann earlier advised President Trump to make a preemptive public statement in advance of January 6th calling for no violence that day." No such statement was made.

It is one thing for Trump to ignore the media, maybe even to ignore someone like Attorney General William Barr, who had told the president he had lost the election. They could be dismissed as part of "the establishment" he so loathed. But Hicks was not part of any opposition nor the establishment. She was one of his closest confidantes. And he refused to listen.

The mob that assembled that day was not only angry, they were armed.

'They're not here to hurt me,' said the man who had taken an oath to preserve, protect and defend the Constitution of the United States.

"Secret Service confiscated a haul of weapons from the 28,000 spectators who did pass through the magnetometers: 242 cannisters of pepper spray, 269 knives or blades, 18 brass knuckles, 18 tasers, 6 pieces of body armor, 3 gas masks, 30 batons or blunt instruments, and 17 miscellaneous items like scissors, needles, or screwdrivers," the report states. "And thousands of others purposely remained outside the magnetometers, or left their packs outside."

The president was unconcerned. Trump was more bothered by the fact that some of his supporters were not within the secure perimeter for his speech and the crowd would not appear as large on camera. They did not want to go through the magnetometers (mags) where any concealed weapons would be detected and confiscated. Cassidy Hutchinson, who was with Trump backstage before the rally, testified:

And he felt the mags were at fault for not letting everybody in, but another leading reason and likely the primary reasons is because he wanted it full and he was angry that we weren't letting people through the mags with weapons — what the Secret Service deemed as weapons, and are, are weapons. But when we were in the off-stage announce tent, I was a part of a conversation, I was in the vicinity of a conversation where I overheard the President say something to the effect of, "I don't F'ing care that they have weapons. They're not here to hurt me. Take the F'ing mags away. Let my people in. They can march to the Capitol from here. Let the people in. Take the F'ing mags away."

"They're not here to hurt me," said the man who had taken an oath to preserve, protect and defend the Constitution of the United States. And he was more concerned the crowd might look small than he was about violence breaking out.

The whole episode reads like a bad novel or an account about a country with a history of juntas. But it happened here, in the United States of America. There may or may not be an indictment; an indictment may or may not yield a conviction. But the historical record provided by the Select Committee is clear. Donald Trump is an anti-American thug.